Hello BikeAdvice readers, here we come with the report of Sales of Indian bike manufacturers for the months of June and July consolidated into one. Every manufacturer enjoyed a grand success at the sales tally. 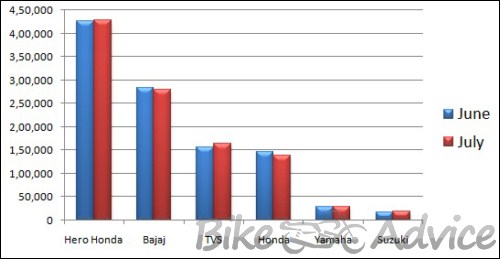 Read on to know their individual performance.

JUNE: Continuing with the mega upward swing trend, country’s largest manufacturer, Hero Honda registered a massive 16.6 percent growth in its sales for the month of June 2010 as they managed to sell 4,26,454 units as compared to 3,65,734 units sold in the corresponding month last year. For the complete April to June quarter consolidated sales grew by 10.28 percent registering a mammoth total of 12,34,039 units when compared to 11,18,987 units in the corresponding quarter in 2009. Hero Honda’s lone scooter, Pleasure’s sales jumped 53 percent as it recorded sales of 25000 units in June 2010.

Hero Honda sounded upbeat about future months with such a growth pattern during the very first month of the quarter. Hero Honda also announced that they would be launching a series of new variants. We, for sure, know Hunk’s upgrade is around the corner. CBZ Extreme is also expected to get a cosmetic makeover along with a few other commuter bikes from the stable.

JUNE: Exceeding market growth, Bajaj Auto recorded highest ever sales in June 2010 registering a phenomenal growth of 68 percent as they managed to sell 2,82,808 motorcycles (which includes 526 scooters) compared to 1,67,945 sold during June 2009. Bajaj also reported that sales were limited due to production constraints and plans to ramp up production to meet the current demands. Company’s latest launch Discover 150 registered sales of 20,000 units. Major percentage of sales came from Pulsar and Discover brands as planned. Exports also continued to see an upward trend registering growth of more than 60 percent for the month of June 2010.

For the quarter ended in June, Bajaj registered a whooping growth of 72 percent registering sales of 8,28,391 motorcycles (including 1693 scooters) against 4,82,727 units sold in the corresponding quarter last year. Out of this, Domestic sales stood at 5,66,121 units as compared to 3,30,194 units in Quarter 1. Exports also witnessed a very impressive growth of 72 percent registering sales of 2,62,270 units as compared to 1,52,555 units exported in June 2009. A growth of 71 percent in the domestic market becomes more commendable when industry growth of 24 percent is taken into consideration.

Market share for Bajaj also increased to 33 percent from 25 percent in Quarter 1 of financial year 2010. According to company’s strategy, Pulsar and Discover brands constituted more than 80 percent to the overall sales. The flagship Pulsar brand sold 76,000 units per month on an average. Discover averaged 1,10,000 units per month which made it the second largest motorcycle brand in India. Company plans to roll out Discover 150 during quarter 2 in whole of India which is expected to further boost sales.

JULY: Kicking the new quarter in style, Bajaj posted a huge 66 percent growth for the month of July 2010 registering sales of 2,79,781 units against 1,68,163 units sold during July 2009. Exports also grew by over 50 percent to ensure things are moving ahead of plan. Bajaj expects to cross the magical 3 lakh mark in sales in the forthcoming months and with the current response and product portfolio we expect it to be August or September 2010 for the company.

JULY: July 2010 ensured TVS continue with their great growth flow as they registered 35 percent greater sales registering 1,63,106 units this month compared to 1,20,944 units sold in July 2009. Domestic sales also continued to witness the same momentum of remarkable growth for the company as they increased by 33 percent in July 2010 compared to July 2009. Individually, TVS managed to oust 61,051 motorcycles in July 2010 against 42,998 units in July 2009 in turn ensuring a handsome growth of 41.9 percent. Scooters followed suit by registering a growth of 46 percent with sales of 40,357 units in July 2010. Exports grew by 54 percent registering sales of over 20,000 units in the month of July 2010.

JUNE: HMSI, which has been precariously close to TVS for all these months, piped TVS Motors for the third spot in the domestic market by registering an incredible growth of 41.5 percent with sales of 1,46,073 units in June 2010 as compared to 1,03,209 units they managed during June 2009. Motorcycles recorded 50 percent growth by registering 66,334 units in June 2010 while sales of scooters rose by 35 percent to 79,739 units.

JULY: A 48 percent growth in the month of July 2010 saw Suzuki all smiles as they registered total sales of 18,512 units when compared to 12,539 units in July 2009. Major sales were contributed by company’s premium offerings GS150R and Access 125. With new launches scheduled in the forthcoming months Suzuki looks all set to grab a good market chunk soon.

The latest entrant, Mahindra two wheelers, saw a bumper rise of 329 percent in July 2010 sales which stood at 12,033 units (highest ever for the company), compared to 2,808 units in the corresponding month last year. Mahindra also said that they achieved milestone sales of 1 lakh scooters in 11 months against a set target of 18 months. Mahindra’s stable is filled with 4 scooter offerings currently and plans to enter the burgeoning motorcycle market very soon with an entry level volume centric product to further promote its growth path and set itself as a complete player.