Continuing with the upward trend, all major two wheeler automobile companies in India registered positive growths for the first month of the new fiscal kicking off the financial year on a positive note. 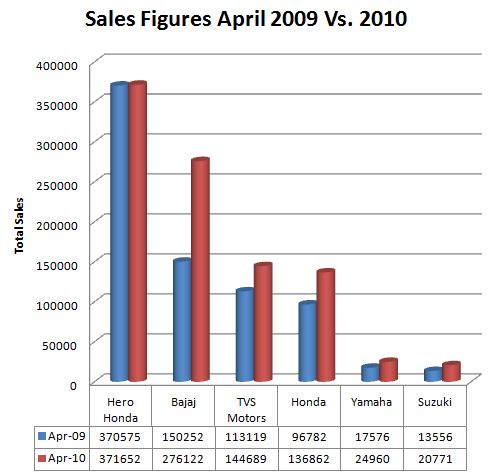 HERO HONDA: For the sixteenth consecutive month, India’s largest two wheeler manufacturer, Hero Honda has registered sales of over 3 lakh units in a month. In the month of April 2010, Hero Honda registered total sales of 3,71,652 units which is a very marginal increase of 0.2 percent over 3,70,575 which it managed to sell during April 2009. All of those who read our monthly figures and have developed a habit of reading colossal growth figures for Hero Honda would feel a little amazed reading such a low percentage gain this month. Let us clarify that Hero Honda achieved such a huge figure despite a severe shortage of batteries for over two weeks due to an agitation at Exide’s Bawal facility. And for the same reason around 50k fully built two wheelers were left stranded at company’s facilities devoid of batteries. However, as company officials clarify, the issue has been resolved and there would be consistent supply now.

TVS MOTORS: Chennai based TVS Motor Company has been displaying a very good show for the past many months and this month remains no exception. TVS witnessed a growth of 28 percent as they managed to sell 1,44,689 units as compared to 1,13,119 units registered in the corresponding month last year. Domestic sales increased by 22 percent from 1,02,985 units in April 2009 to 1,25,471 units in April 2010.

Overall scooter sales also witnessed growth of 43 percent increasing from a meager 18,819 units in April 2009 to a relatively good 26,860 units in April 2010. During this period company’s 125cc 110cc unisex scooter Wego was made available to Pune and Nagpur markets and according to the company, the scooter garnered an encouraging response from the customers. And as the company plans to expand this scooters availability base, these figures are expected to further rise.

Motorcycles also displayed a great show this month growing at 24 percent registering 66,000 units compared to 53,235 units registered in April 2009. Innovative 110cc clutchless Jive has also witnessed a very good response from the market helping the company achieve such growth figures. TVS also managed to export 19,218 units which was a remarkable growth of 90 percent over the 10,134 units company managed to export during the whole of April 2009.

It has been a commendable effort from TVS to keep one of the fastest growing two wheeler company HMSI lagging behind them. But with the launch of Twister from the rivals, TVS needs serious thinking from the top thinktanks on how to maintain the lead.

HMSI is one of the fastest growing company in the market and at the pace they are growing, it has become a daunting task for other companies to maintain their leads and that also signal danger signs to bigger giants like sister concern Hero Honda and Bajaj Auto with the biggest threat to TVS Motors. Launch of 100cc twister in the volume segment is expected to further propel the growth for the company and we really expect to see a turnaround of rankings in the forthcoming months.

YAMAHA INDIA: Yamaha also has been enjoying their show at the tally as they witnessed a healthy growth of 42.01 percent registering 24,960 units when compared to 17,576 units they managed to sell during April 2009. Sales in the domestic market rose by 11.51 percent to 16,861 units in April 2010 from 15,120 units sold in April 2010. But the major contributor to the remarkable growth were the exports which registered an outstanding increase of 230 percent registering 8,099 units against 2456 units Yamaha managed to export from India to the neighboring countries. With the launch of the all new 110cc YBR in the entry level volume segment and along with the refreshed versions of the FZ series, sales are expected to further propel for Yamaha in the forthcoming months.

Many readers ask us why are Yamaha sales so low on paper despite a lot of FZs and R15s on the roads. The game is simple; these bikes sell at a premium and manage to garner respectable totals in the urban market. But apart from the top 8-10 cities, figures for Yamaha are not very encouraging. FZ series managed to sell 7k units per month on an average for the last fiscal (which are very good numbers considering the price at which they are put) but these are unfortunately among the lowest in the 150cc segment.

SUZUKI INDIA: Joining the bandwagon was the Suzuki’s Indian subsidiary Suzuki Motorcycle India Limited (SMIL) as they registered a handsome growth of 53.22 percent recording sales of 20,771 units as against 13,556 units sold by the company during April 2009. With each passing month Suzuki is tightening its grip on the market slowly but gradually as is clearly depicted by the monthly sales figures. As always majority of these sales come from their premium offerings, 150cc motorcycle GS150R and 125cc scooter Access.

With nothing very new to offer Suzuki is playing the sensible role of expanding their service base currently to penetrate into the market. According to unconfirmed news, a new revamped version of their 125cc offering Zeus is expected to hit the market within a couple of months. The bike will not go through drastic technical changes, but will get few tweaks here and there along with fresh graphics as has been the current trend in the market.