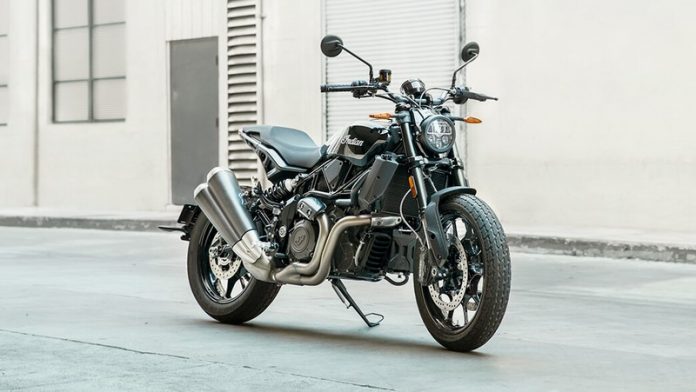 Indian FTR1200 price range goes uptil 17.99 Lakh for the top model and it looks nothing short of brilliant. Read features and details…

American cruiser brand Indian Motorcycles has finally launched the FTR 1200 in India. The new model is available in three variants and the company had already started accepting bookings; you can book this flat track racer by paying a token amount of ₹ 2 Lakh at any Indian dealership in the country.

Inspired by Indian’s championship-winning FTR 750 flat-track race bike, the larger FTR series gets a new liquid-cooled 1,203cc V-twin engine which makes approximately 123 Horsepower and 120 Nm of peak torque and is paired to a 6-speed gearbox.

The FTRs use trellis frame, feature inverted front suspension with radially mounted dual Brembo brakes and ride on Dunlop street tyres with flat track-inspired tread. The fuel tank is located under the seat for a lower centre of gravity, while the airbox is positioned above the motor for optimised airflow. The swingarm and rear suspension, similar to FTR 750 race bike, gives them sporty looks.

Coming to the cockpit, FTR series includes full LED lighting, 4.3-inch customisable Ride Command LCD touchscreen with Bluetooth connectivity, USB port with fast-charge capabilities and cruise control. The touchscreen display can be operated even with the gloves on.