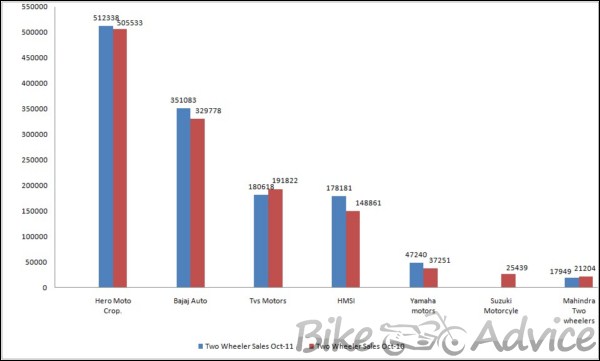 Commenting on October month figure Hero MotoCorp Senior Vice-President (Marketing and Sales) Anil Dua said, “”We have been reaching new milestones this fiscal and the highest ever October retail sales is no exception. We are delighted with the response of the customers this festival season.” The company reported over 6.5 lakhs units retails sales two wheelers in October month which is highest ever in the company history. The previous record is of 6 lakh units’ retail sales in the October 2008.

However, the company has reported retail sales of 2,50,000 units for the month of October 2011 which is by far highest in company’s history. It is also 20% higher compared to last year Diwali sales. As significant amount of inventory liquidated at dealer lever in October month, the company expect the November and December month sales in the range of 2,00,000 units. The company has sold approximately 12,97,871 units during April 2011 to October 2011 period up by 11.61% compared to 11,62,861 units in the same period last year.