India was for a long time considered to be the Global hub for both manufacturing and exporting of automobiles. Now, there seems to be a slight shift in this hub. China is growing as a new export hub with many Indian two wheeler manufacturers who are interested in going global. 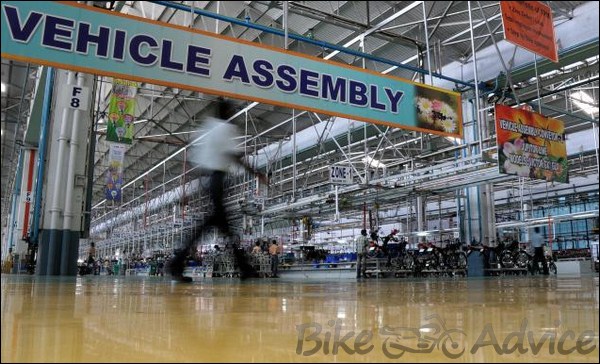 As of now, Bajaj and TVS Motors are the 2 manufacturer who are active in this region. TVS Motor Company recently said that it was planning to shift a large part of its export basket to China. Bajaj Auto already despatches the 100cc Boxer from its Chinese assembly facility to Africa and is now even keener on enhancing this activity.

The company claims that its experience in the quality, cost and delivery department in China has been more than impressive than the one observed here. In terms of quality, it is ‘top-class’. There is a comfortable 25-30 per cent advantage in cost, and ‘absolutely no issue’ on the delivery side.

According to one of a recent article in Business Line, What is especially critical is that there is a price difference of nearly 50 per cent between the Bajaj Boxer and a Chinese bike heading overseas. It is $500-600 free on board for the Boxer, but it is only $300-400 for locally-made China motorcycles. Even assuming that of the $200 difference, $100 is a result of competitive pricing, the balance clearly stems from benefits that Chinese manufacturers enjoy.

Also quoted is that, it is obvious that the Government supports its industry in China. The situation is increasingly turning the converse in India where big exporters are irked by the Centre’s planned move to withdraw the duty entitlement passbook (DEPB) scheme by September. Here in India, they are reimbursed the duty paid on imported raw material used in products exported.

Mr Rajiv Bajaj, Managing Director of Bajaj Auto had recently said in one of his interviews, “It is not as if we want any special benefits or subsidies. I do not need a crutch for support. But why place a boulder on my shoulders?”

Bajaj Auto, which is the largest 2 wheeler exporting company from India considers shifting the entire production to China as not a feasible option but still the levels of sourcing could increase significantly in the short term.

An industry official had told the above mentioned business daily, “It possibly has not sunk in with policymakers that the manufacturing sector has been playing a key role in creating jobs. Today, these slots will be exported and there will be more employment generated in China and other countries. All this is happening at a time when a slowdown is quite likely in India,” an industry official said” and this is a fact that I totally agree with.

What have you gotta say about the recent shift of these 2 wheeler manufacturers from India to China when it comes to exporting the bikes and scooters. Are we really losing our potential? Leave your valuable comments below.