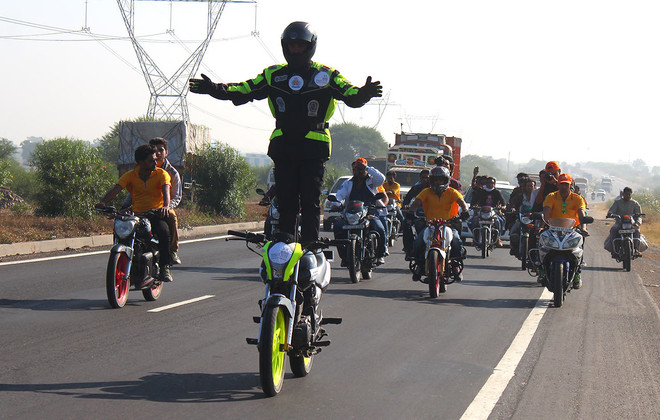 The Indian Army is a matter of pride for most citizens. With 1.3 million members, it is the third largest fighting force in the world. Their daredevil deeds have been making our hearts swell with pride. Their courage, bravery and adventurous nature has written many a success stories. This time round they have broken two more records which will be published in the next iteration of various record books.

Captain Manpreet Singh, at the Signal Training Centre, Jabalpur, covered a total distance of 75.2 km. The best part? He was not sitting on the motorcycle, but standing! The Signal Corps member took 2 hours, 24 minutes and 12 second. In doing so he broke the previous world record set by another Indian.

Last year on December 5, 2015, Ratnesh Pandey from Indore covered 32.2 km while standing on a motorcycle. As per the rules, the riders are not allowed to touch the handlebars at any point of time during the ride. The Indian Army Dare Devils team of Corps of Signals managed to create another world record.

Established by Havildar Sandeep Kumar is a new category. 46.9 km of handle bar riding on a motorcycle. To achieve this feat, he took 1 hour, 27 minute and 31 second. Both these records will find a place in the Guinness Book of World Records, Limca Book of Records, Asia Book of Records and India Book of Records.