Pune based Garware Motors, which is the dealer for Hyosung superbikes in India, has set a feasible target of selling 2000 bikes in India this year. It has also expressed its plans for expanding its number of dealership count to 15 which will be spread across the country, said a top official of the company. 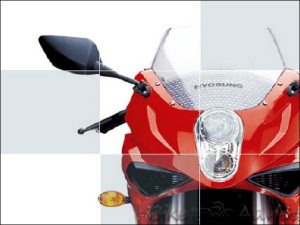 Garware Motors’ Managing Director, Diya Garware was reported saying, “We are targeting a sale of 2,000 bikes this year. We are in the midst of expanding our dealerships — we presently have five which we plan to increase to 15 in the next three-months,” to the reporters.

She was also quoted saying that Garware has plans to come up with five more outlets in Ahmedabad, Chennai, Chandigarh, Cochin and Hyderabad within a short span of two months.

“We are the first Indian company to launch superbikes in the 650-700 cc segments. We are happy to bring to India, the Hyosung bikes by S&T Motors of South Korea. We plan to add their entire range of superbikes into our collection in the next three years,” Garware said.

Hyosung has launched two bikes in India recently; the sports model Hyosung GT650R and the cruiser model Hyosung ST7. These bikes are priced in a band of INR 4.97 lakhs and INR 5.96 lakhs (ex-showroom, Mumbai).

We bring to the information of our readers that Hyosung had forayed into the Indian market for the first time, but of course under a different management. In 2007, the Hyosung Motors Division was acquired by the S&T Group, which still retained the same brand name of Hyosung. Now, for its second debut in India, S&T Motors has signed a tie-up with India’s Garware Motors, which has invested INR 20 crores to set up an assembly line at Wai in Maharashtra, about 240 kms from Mumbai. This assembly plant operates with a capacity of 8 to 10 bikes per day.