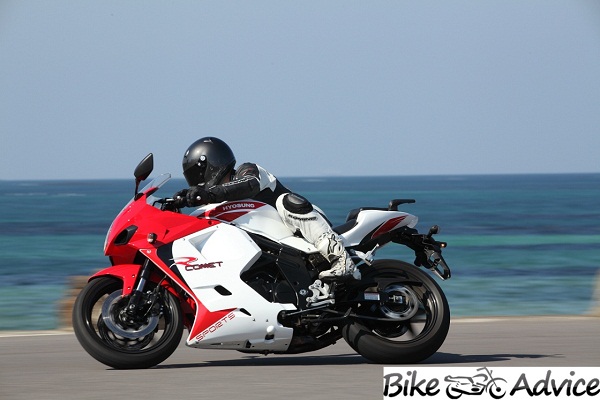 Tentatively the date might be 7th of June on which this bike would be made available in front of us.

Exact pricing of the bike would be disclosed only at the day of launch. There has been a long wave of speculation going around with people expecting prices below 2 lakh rupees. To disappoint everyone of them, GT250R’s ex-showroom price would fall somewhere around Rs 2.5 lakh. This pricing would definitely make the muscular GT fall closer to one of the most favorite bike in the 250cc segment, the Kawasaki Ninja which retails at Rs 3.10 lakh on road Pune.

So, would it be possible for Hyosungs GT250R to compete with the Japanese Ninja? Well, it does have many segment-first features going in its favor. The biggest battle would be the performance and engine response of GT250R.

Whatever be the case, performance aficionadas of our country have a good chance to rejoice with very competent options coming in thick and fast to India. We will try to get all the updates about the bike as well as a comprehensive review as soon as we can. Till then, hold your decisions and let’s hope we have a good product in hand!