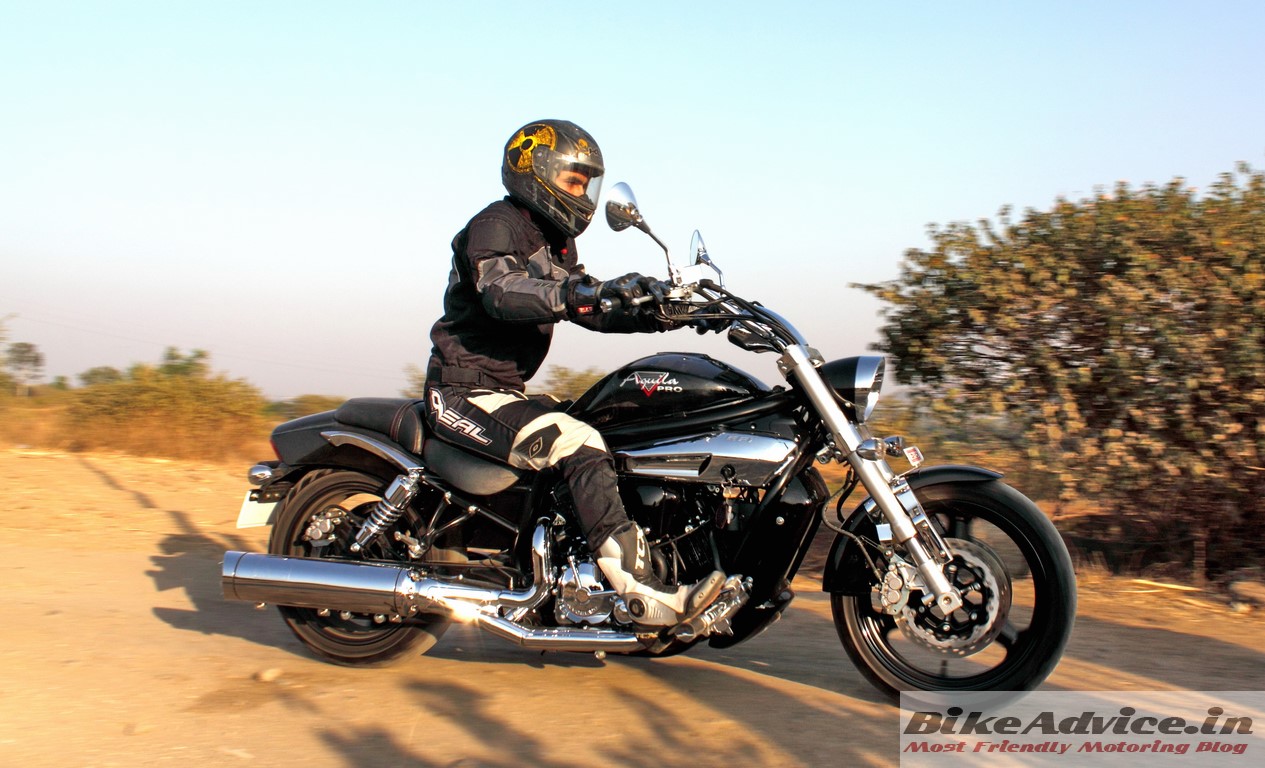 Note: Pictorial Review at the end

Come to think of it, the basic concept of “two wheels and an engine in between” can come in so many different forms that it’s mind-boggling to say the least. In India, most can normally identify three types of motorcycles – Sports, Cruiser, and Standard, and off late, people have also become aware of dirt-bikes and café racers.

Of course, the enthusiasts among us would even know about trials bikes, flat trackers, scramblers, etc., but it’s the aforementioned three raw categories that serve as accepted umbrellas under which the masses very comfortably put almost everything that is on sale in the Indian two-wheeler market today. So, you would have everything from a Pulsar 150 with a headlight cowl to the bonkers BMW HP4 sharing the ‘Sportsbike’ tag while all from a CD-Dawn to a Bonneville would be considered under the ‘Standard’ category. 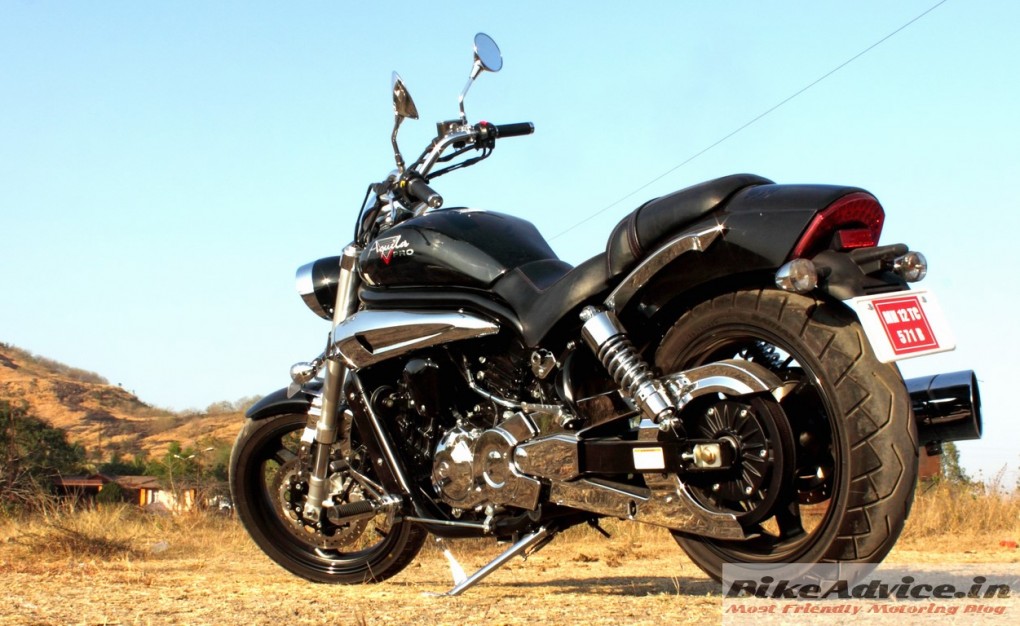 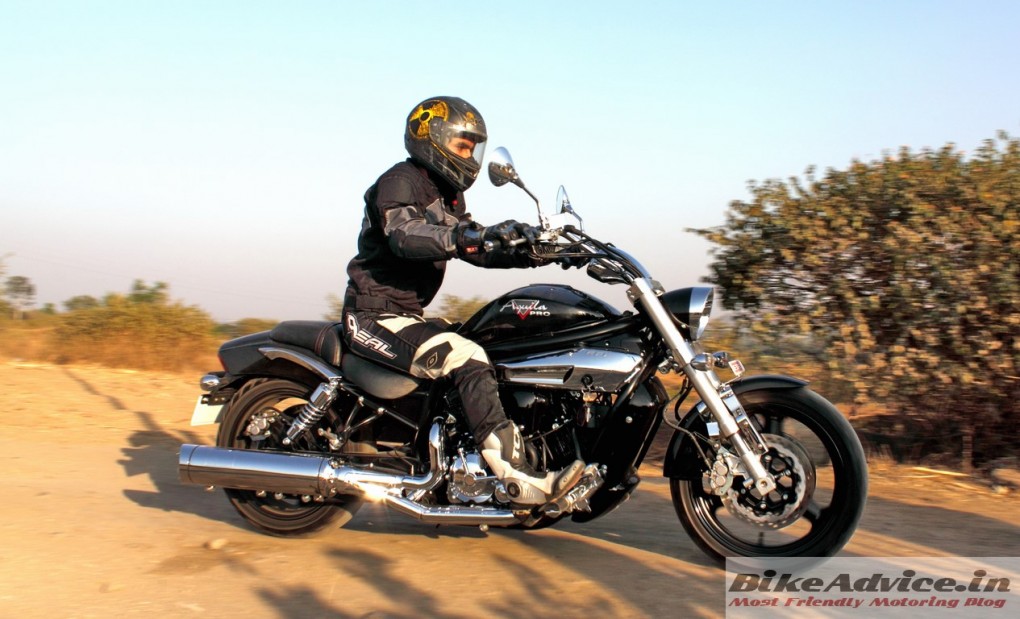 Still better though is the ‘Cruiser’ segment where people correctly put the, er, correct type of motorcycles. Okay, so all Royal Enfields are also loosely categorized as cruisers but still, they qualify to a large extent, don’t they? Does that mean we have a relatively better understanding of this segment or is it just a case of less variety here that makes it easier for us to classify them correctly? I believe it is mostly the latter as ever since India’s first cruiser, the Bajaj (Kawasaki actually) Eliminator came out in 2001, other manufacturers, barring Yamaha, never really followed. Of course, Kinetic did bring the Hyosung Aquila 250 in 2003 in limited numbers but it’s only the original Eliminator that has soldiered on, albeit with a new name and bigger Indian hearts – the Japanese 175 cc engine first got replaced with the Pulsar’s 180 cc unit, and later on the Avenger 200 was launched only to be finally replaced by the Avenger 220, which still has a huge fan following. Other than that, and the Hyosung Aquila 250, there is nothing in the 200-600 cc range if a low-slung shiny cruiser is all that you want. 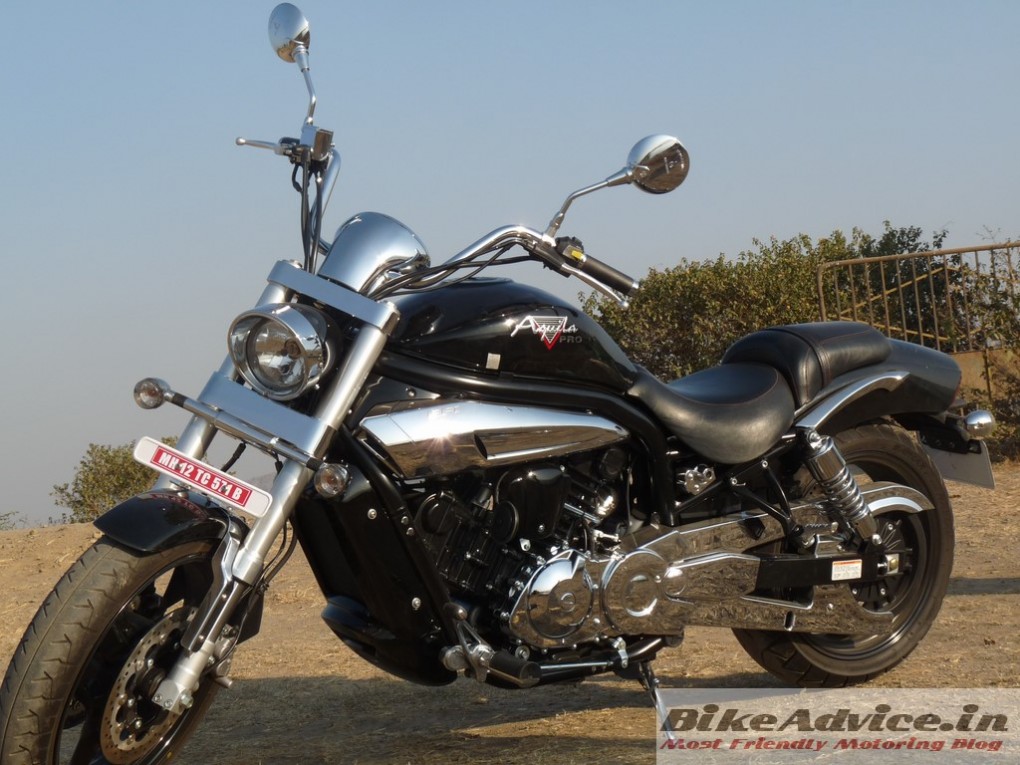 Hyosung launched the Aquila Pro GV650 cruiser in January 2013 to fill that gap but the company has been invisible when it comes to marketing its products properly, thus the not-so-encouraging sales. Let’s take a closer look and find out if this one deserves to sell more…

If you are even a passive motorcycle enthusiast, your first reaction upon seeing the GV 650 would be – “V-Rod!” No, you won’t mistake the Hyosung for the Harley-Davidson; you will certainly, at once, spot, and appreciate, the striking resemblance between the two. The 650 cc Aquila is 2,330 mm long, which makes it just 27 mm shorter than the 1,250 cc V-Rod. Yes, this is a BIG motorcycle gentlemen, and you do get a lot of metal for your money. Thankfully, the chrome is not overdone and that to my eyes makes the bike look purposeful, and not a shiny (and huge) piece of living room decoration. 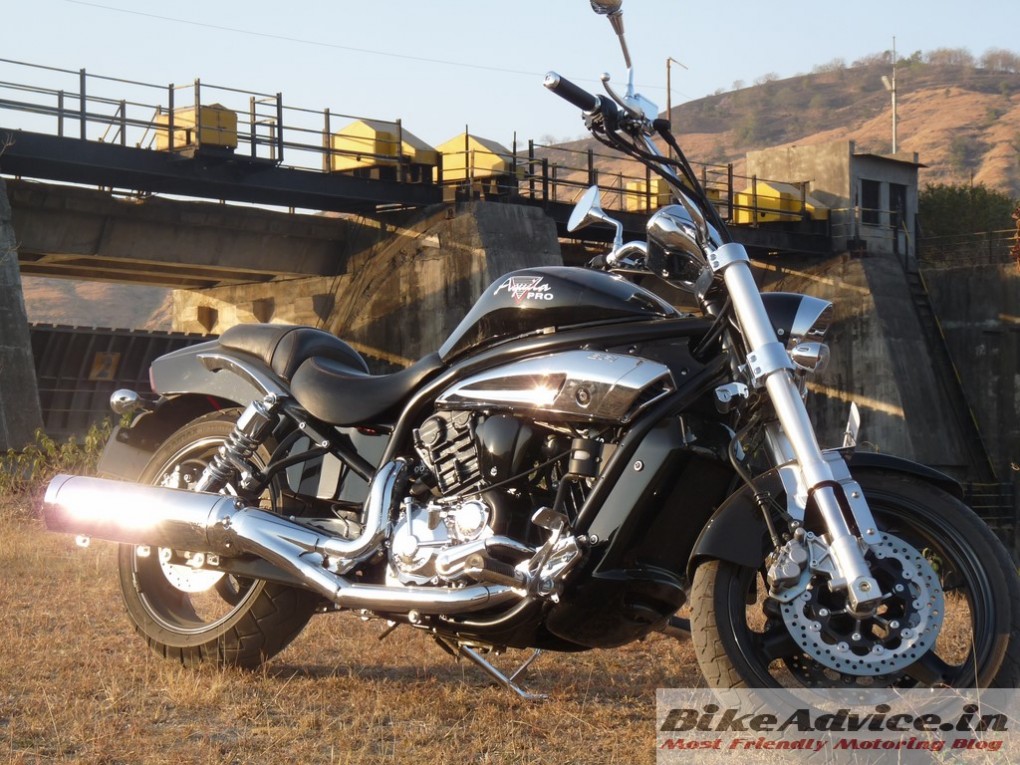 This is a typical low-slung cruiser with a 691 mm saddle height, high-raised handlebars and forward-set foot pegs. Our test Aquila came shod with fantastically grippy Bridgestone Battlax tyres — 120/70 at the front (18-inch alloy) and 180/55 at the rear (17-inch alloy). The 41 mm inverted forks at the front, other than doing their core job, add visual mass to the front of the bike. The overall fit and finish is almost top-notch and so is the paint and chrome; however, it is the switchgear that looks and feels cheap. The bike gets an all-digital display pod that gives out readings for speed, fuel level, engine temperature, distance covered, and a few tell-tale lights. 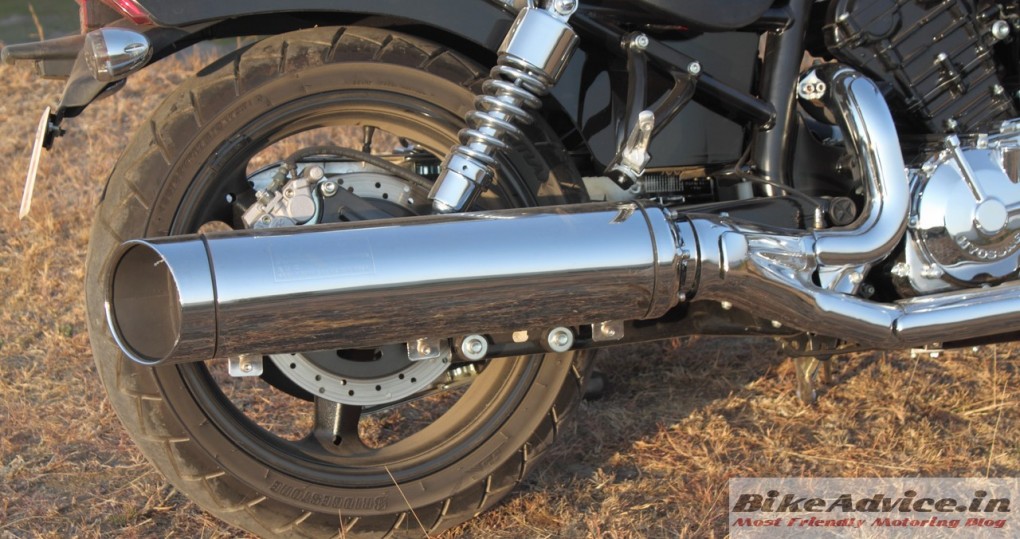 My favourite part of the design? It’s got to be that cannon-barrel of an end can – reminds me of the Yamaha Road Star Warrior! There are no artistically routed bend pipes here that meet sissy slash-cut twin silencers. Instead, the uninhibited design and size of the two-into-one exhaust system clearly tells us about the bike’s character.

The 647 cc fuel-injected and water-cooled motor is the same unit that powers the GT650R and GT650N. The power output remains the same and so does the behavior. The 90-degree V-twin engine has dual overhead camshafts and breathes through eight valves. It produces 74 bhp at 9,000 rpm and 62.1 Nm of torque at 7,500 rpm. Again, this is not a cruiser engine – in fact, it is an old Hyosung habit where the company first puts an engine in its sportsbike and later shoves it with minimal changes in a cruiser body. Even the Aquila 250 of the early 2000s had the Hyosung Comet 250 GT’s engine, and so does the current Aquila 250 that borrows the engine from its sporty sibling, the GT250R. 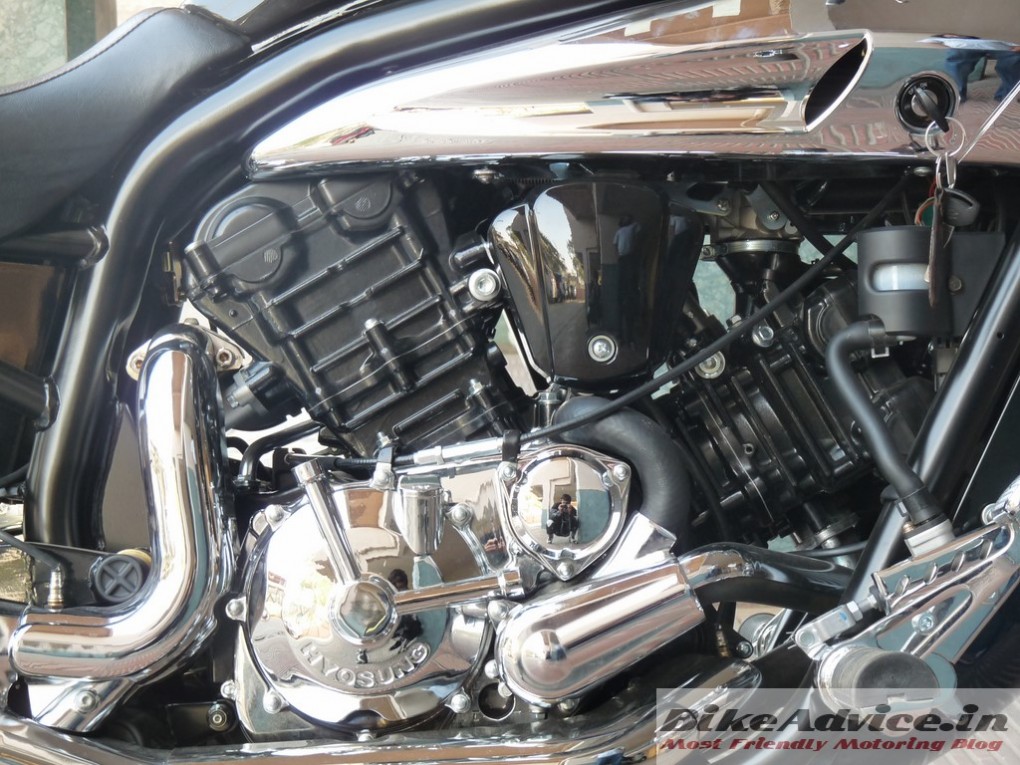 Thumb the starter and the GV650 comes to life with a muted but bassy rumble. Slot the gear into first, let the clutch out, and you’ll be surprised by the quickness of this machine that weighs around 240 kilos! The 0-100 km/h sprint is done away with in six seconds and you would not require a much longer stretch of road to cross 150 km/h. The top speed we could manage was close to 170 km/h and there was surely juice left for more.

More impressive is the grunt in mid-range where I never found the need to downshift to overtake; a twist of the wrist is all that is needed to leave the herd behind. The way this cruiser puts down power is quite entertaining, and you won’t find the surge lacking anywhere on our roads. On the flip side, the bike demands that you exercise caution during rush hour traffic as the abrupt fueling, typical of Hyosungs, at those speeds can catch you unawares. Be as smooth as possible with the right hand and you’ll be sorted. 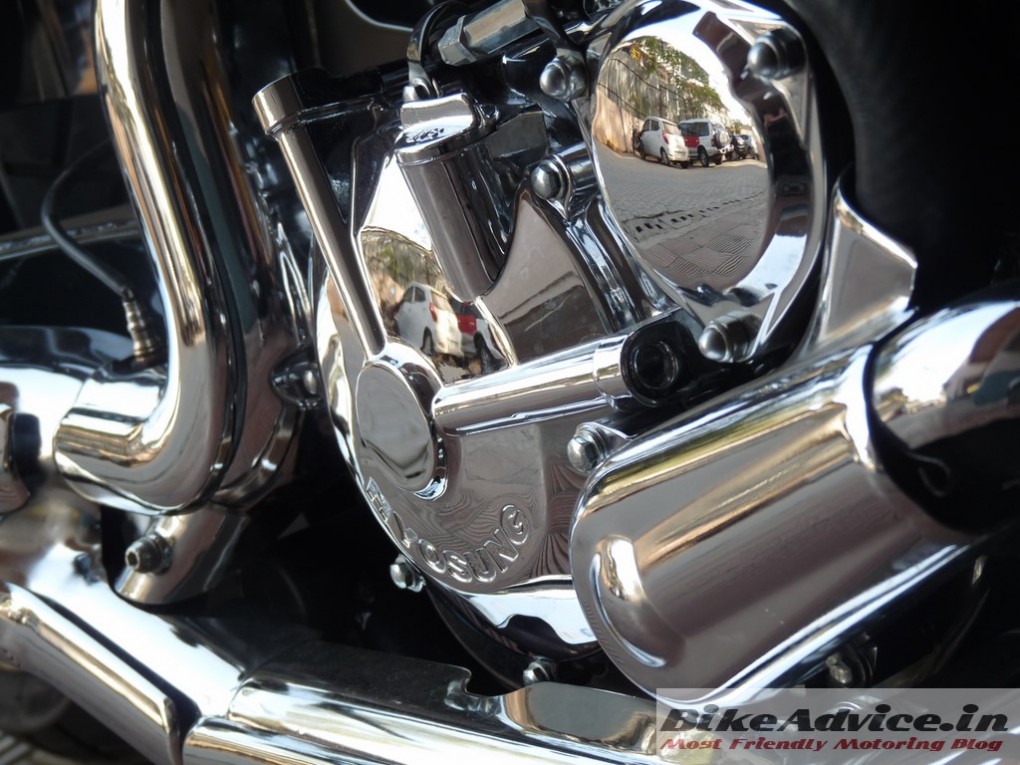 The five-speed gearbox is not the slickest of units but gets the job done, and I did not face any drag issues despite getting stuck in crawling traffic for more than half an hour. The engine’s heat, of course, in such conditions can prove to be a free hair-removal therapy for your legs (even if you are not into that kind of stuff) but it did not cause any problem to the bike’s running. 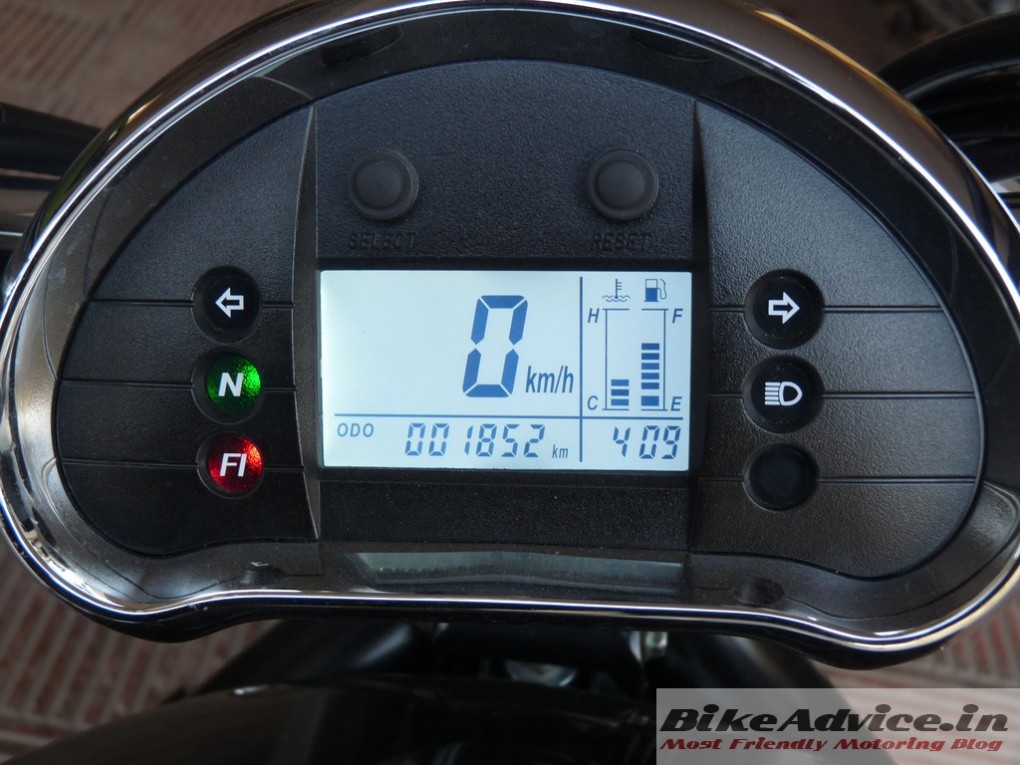 However, once the bike is out of the traffic web its best quality comes to the fore – the bike is awesomely stable in a straight line but I just did not expect it to tackle corners like it did. The manner in which it leans into the high speed bends makes you believe that the bike has forgotten that it’s a cruiser! The bike’s light steering, firm-set suspension, and grippier tires allow you to flick the bike into corners without a second thought and you’ll be grinning while you do so. Full marks to Hyosung on the entertainment front! 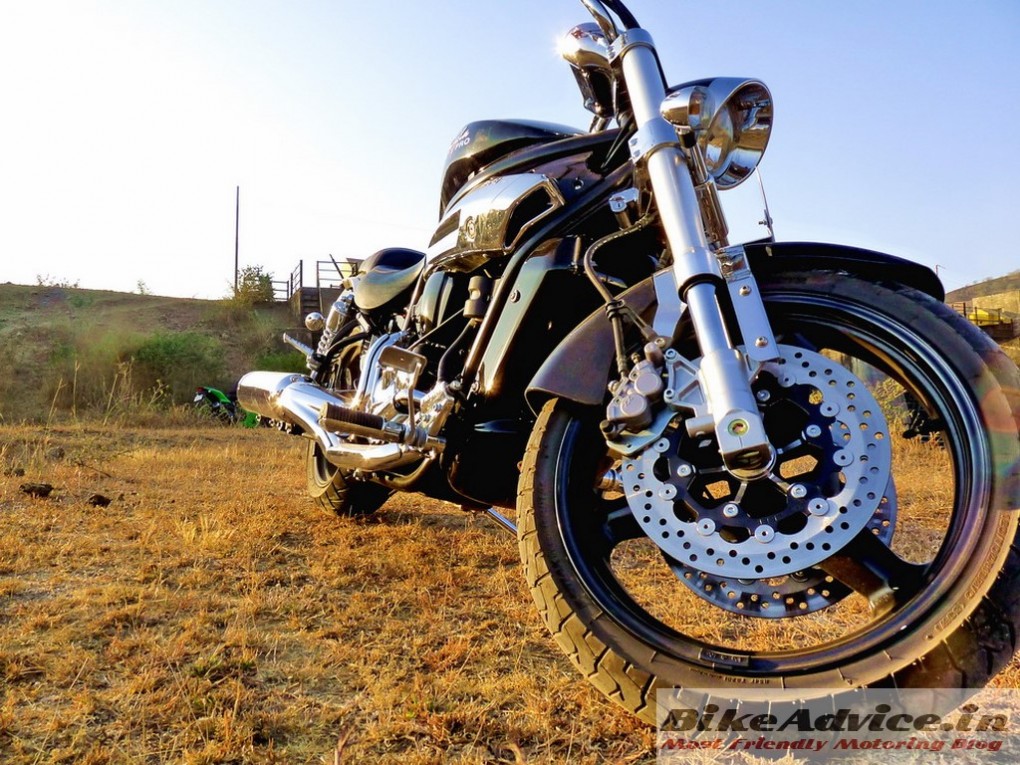 And while you are having all that fun, it is always nice to know that the dual 284 mm discs up front and the 144 mm single at the rear have enough bite and feel to increase your life expectancy. At this price, however, ABS should be a standard fitment in all bikes. Oh yes, I would also like to add in here that though I found the factory suspension settings perfect for my liking, you can adjust the front suspension  for compression and rebound damping while the simpler twin shock absorbers at the rear are adjustable for preload.

In isolation, this is a fantastic bike, and certainly a lot of motorcycle for your money. It looks awesome and is possibly the best looking cruiser in the sub million-rupee bracket too. It goes like a bullet (no pun), handles like a dream (for a cruiser, and no pun again), and runs around 20 km for every litre of the unleaded, despite our hyperactive right wrists… 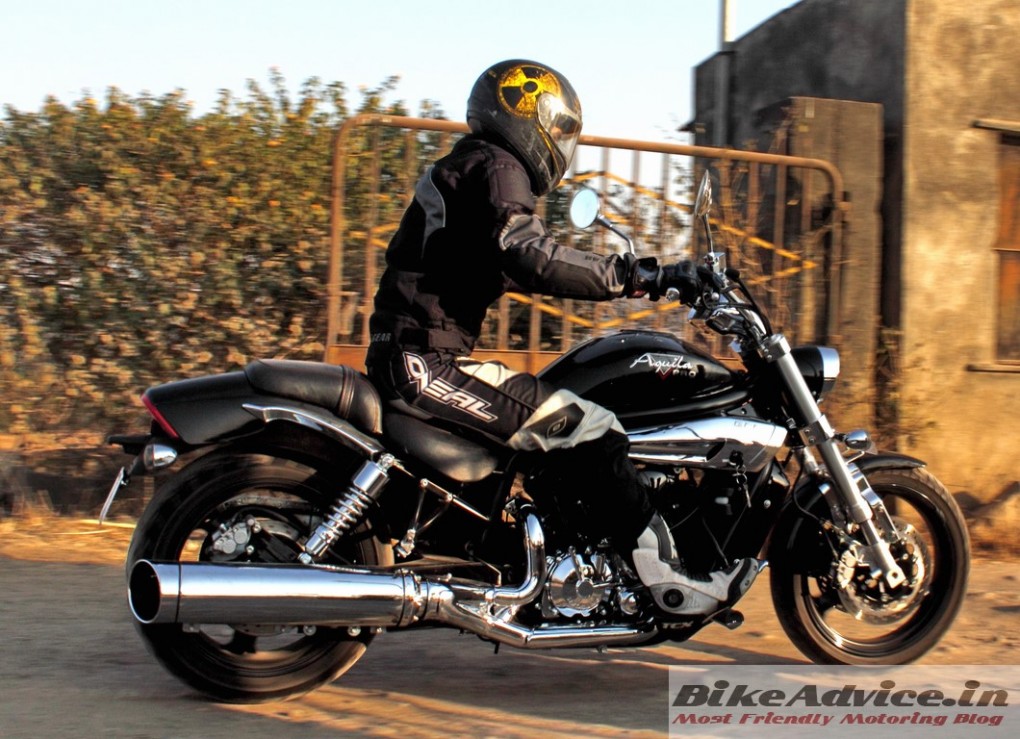 However, most prospective owners will argue that not only is Hyosung’s Aquila GV650 down on engine capacity when compared to the Harley’s Street 750, the latter is around a lakh-rupee cheaper too! And they won’t be wrong. But, interestingly, I also met a couple of prospective buyers who said that they would not mind paying more for the ‘exclusivity’ of the Aquila than being seen on the ‘cheapest Harley’. But the only thing that holds them back is the perception around Hyosung’s after sales service and cost of spares…