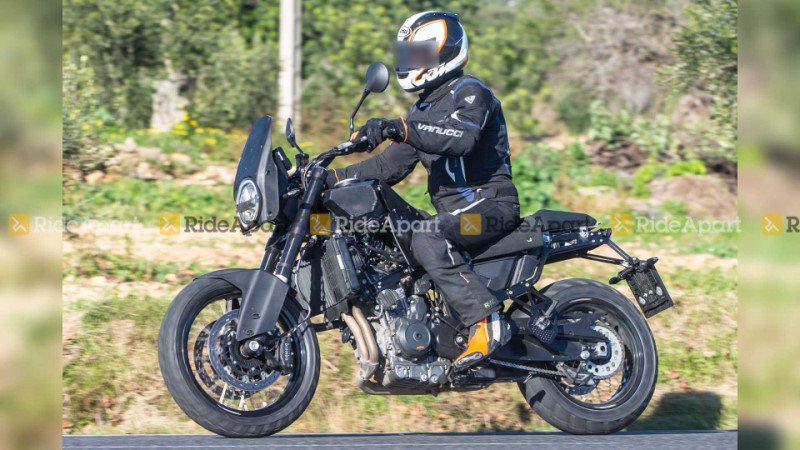 Under test Husqvarna Svartpilen 901 pics have surfaced from an unknown location. The 890 Duke based motorcycle looks significantly different from other Svartpilens…

In its pursuit of turning around Husqvarna’s fortunes, its new owner KTM is expanding the product lineup. After taking care of the lower capacity spectrum, the Swedish brand is now moving higher up the displacement pedestal. In a latest, its Svartpilen 901 has been spotted testing.

The Svartpilen 901 will join the existing lineup of 200, 250 and 401 and the 701! Going by the spy pics, the motorcycle appears to share its engine with the KTM 890 Duke. All the creases and curves are very similar to what we have seen on the new-age Austrian.

The current biggest Svartpilen 701 produces 75 bhp of peak power and 72 Nm of max torque from the 692.7 cc single cylinder engine. The 890 Duke’s motor, in comparison produces a significantly higher 121 hp of power and 99 Nm of torque, and has an additional cylinder! The Husky may get a different tune but expect performance in a completely different league altogether (as compared to the 701).

The test mules captured are running without bodywork and these may still be testing the mechanicals of the motor and other stuff. However, in comparison with the current Svartpilens, this 901 looks a lot bigger and may carry different styling.