It’s been pouring rumors in the Indian bike market. Just a few hours back, I posted a write up on TVS Victor’s rumour to be re-launched in Indian soil. Now, the Honda’s naked bike – VTR 250 is rumoured to foray India by either the end of this year or early next year. The company should have observed the demand for 250cc bikes in India with the launch of its CBR 250R. 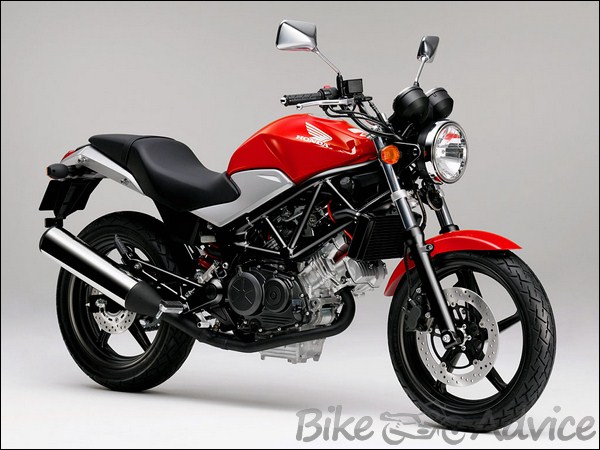 There are at present only 2 bikes in this segment namely the Honda CBR250R and the Kawasaki Ninja 250. But, the latter of these two is indeed pretty expensive to own. Hence, there has been a considerable demand for the former. While Yamaha’s R25 and the so called FZ 250 seem to have no present ideas of a possible ticket to enter Indian, this second bike from Honda would strengthen itself to maintain the dominance of this Japanese manufacturer in this particular segment.

We expect this bike also to be priced competitively as in the case of CBR 250R. The speculated price of this naked machine is INR 1,50,000 as the ex-showroom price. In the International market, the VTR 250 is available in shades of Italian Red, Graphite Black and Pearl Sunbeam White, however we are not sure on which colours would the Honda VTR 250R enter India. Also, this being a naked bike, it certainly would have a good demand in the sub – continent.

The Honda VTR250 is a 90° V-twin engine bike from Honda that has so far had only one major upgrade. Note that the word Major is highlighted. The original VTR250 was a faired model sold only in the USA and Canada from the year 1988 to 1990. The present model VTR250 is a naked bike, produced since 1997 to the present day, available only in the Asia-Pacific region, and from 2009, in the European nations as well. The Honda VTR 250R is also referred to as the Interceptor 250 in few countries across the globe.