Honda unveiled the official sketch of a new adventure style bike which is based upon Honda VFR 1200F. The details of launch will be announced EICMA show in Milan from 2 November 2010. The bike is definitely going to have V4 engine but may have smaller capacity engine compare to current 1200cc engine on Honda VFR 1200F. The bike is aimed to provide on-road adventure and will not have off road ability. Honda is going to represent 8 new models in EICMA show. 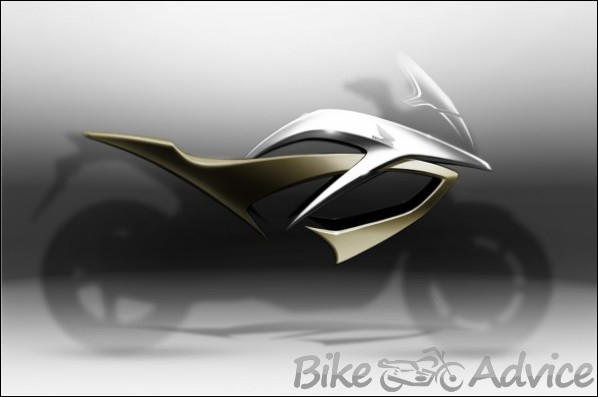 According to Honda press release this machine is an exciting new approach – a crossover machine that represents the best aspects of two separate biking genres. It will have the flexibility and exciting attitude of a naked performance machine, with the upright riding position and rugged appearance of an adventure bike.

This crossover is a midrange capacity motorcycle – and although it looks like a regular adventure bike, it has a much lower seat height so it can be used comfortably by riders of varying proportions. With the low centre of gravity of a performance bike it is great fun to ride, and because of its wide handlebars and upright riding position it is both easy to manoeuvre and comfortable .

Honda research had revealed that customers want a machine that has both a unique style and is also fun to ride in all conditions throughout the year and so sought to deliver on this desire, with this new machine being the result. This sketch is an early impression of the motorcycle developed by Honda designers at the Honda Design Centre in Rome.

The final production motorcycle will be shown for the first time at the EICMA show in Milan from 2 November 2010, when pictures, production details and availability in dealer dates will be revealed. Honda will also reveal at EICMA a new concept motorcycle using the 1200cc V4 engine first seen in the VFR1200F, to further prove its leadership in this evocative and powerful engine configuration.