Karthick has submitted this review in our Ownership Review Contest No 13, ensuring himself an assured prize. The contest also offers a chance to win Riding Jacket, Helmet and more…Here are all the details.

Hello road kings, I am Karthick Sekar from Chennai, Tamilnadu. I am a software engineer by profession and an ardent automobile enthusiast. Right from my childhood, I was very passionate about bikes and used to ask my dad a lot of questions of the technical aspects of the bikes. 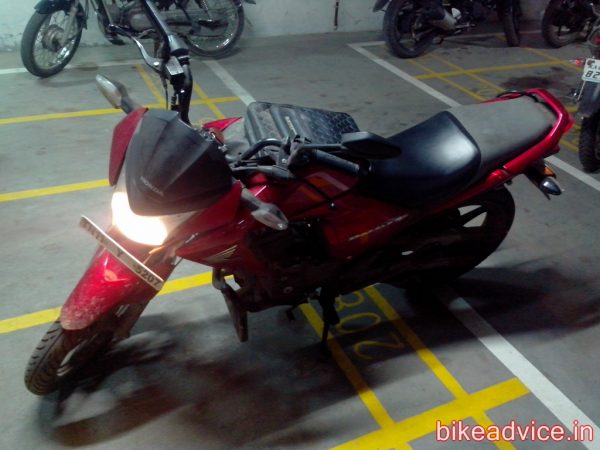 I am a regular follower of the sites – BikeAdvice.in and MotorBash.com.
I own the beautiful beast from the Honda family, the CB Unicorn Dazzler. Here is my review.

I owned a TVS Star City ES from Feb 2007 to Mar 2013. It was six long years which I have spent with the bike and I loved every moment of the time. The bike gave me an astounding city mileage of 60+ kmpl all the time. I did not have any major niggles and I could say that it was a hassle-free ownership. But, after riding the bike for so long, I got bored and felt that I need to upgrade to a bike with more power on the tap. I made up my mind and firmly decided to go for an upgrade.

I am a big fan of Honda and have always thought that Honda should bring some well-designed bikes with more features similar to their competitors which were not the case until the Dazzler was launched. 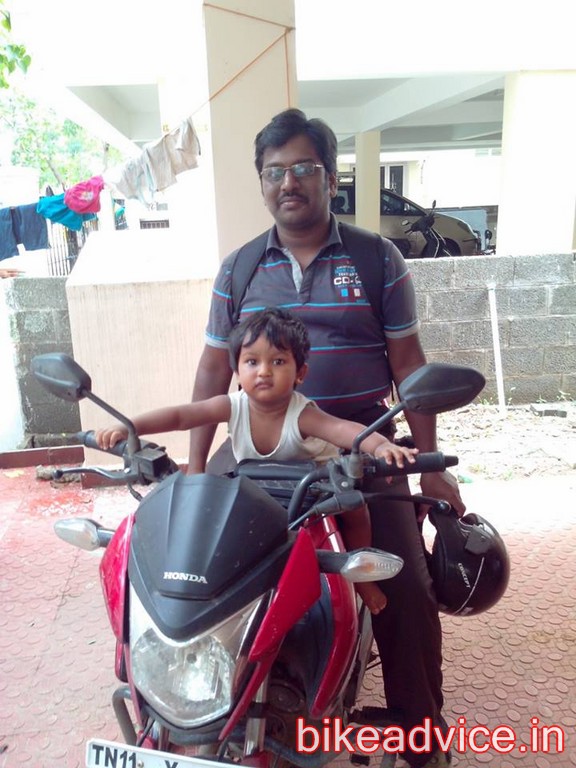 Also, having owned a Star City which gave me fantastic FE figures, my primary aim was to buy a powerful bike without compromising on the FE. I wanted the bike to have features like the Digital instrument cluster, Mono Suspension, sporty looks etc.
To be honest, I did not have any other choices except the dazzler. Though, I was impressed with the Specs of Pulsar 200 NS, it was way out of budget and I thought it may not even come close to the Dazzler when it comes to FE. So finalized the “Dazzler”.

Finalizing the deal and welcoming home the Dazzling Dazzler:

Booked the Dazzler without any hesitation from a reputed dealer. Bargained hard to the dealer and got a waiver of mere 500 odd rupees from the on-road price after the sales manager saying repeatedly, “Sir, Honda does not offer any discounts”.

Despite, the vehicle being available in the stock yard, it took 2 weeks to complete the RTO process. I could say that I had 2 weeks of sleepless nights until I got the call from the dealer. While I reached the dealership on March 15, 2013, they made me wait further saying that the seat covers to be put up. This added to the agony.

Finally, I laid hands on the beast and was in cloud nine after I pushed on the start button.

I loved the overall design of the bike. I always feel that “Beauty lies in the eyes of the beholder”. Some may like the looks of the bike, but some may not. The tank cowls are really attractive and finally, the digital instrument cluster has been added to the bike.
The front side of the bike looks gorgeous, though the rear side is a bit of a let-down. No LED tail lights, but the lights looked better than the age-old one of CB unicorn.

I should say that this bike is not a mere sticker update to an existing unicorn, but a completely re-designed one which really showed the focus of Honda on Indian markets.

No Kick start and an average rear looks did not make this bike set the sales charts on fire for the Honda. But, I can boldly say that this bike with a little premium over the CB unicorn offers a lot of goodies like MRF tubeless tyres, digital instrument cluster, and slightly higher power output (14 bhp) than the Unicorn etc.

Smooth, silent and Fuel efficient engines are Honda’s forte. Honda did opt to tune the CB unicorn’s engine and beefed up the power output a wee bit to Produce 14 bhp which is a mere 0.7 bhp more than the unicorn’s engine. The engine is butter-smooth and hardly have we known that the bike is running.

The Engine may not be as powerful as the Apache’s and Pulsar’s at lower RPMs, but it loves to be revved up. The mid-range of the bike is very good and we can cruise at the 5000 to 5500 RPM range with effortless ease. Tap the accelerator when you are in the 5000-5500 RPM range and it gives good amount of power. 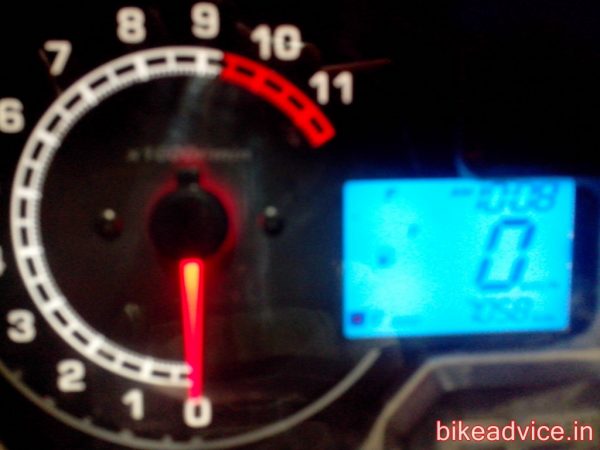 It may not be the ideal choice for those who want to speed their way immediately when the signal turns green, but it is an excellent choice for those who like relaxed cruising. There are no vibrations creeping in above speeds of 60 km/hr. as is the case with the competitors. The bike speeds to 80 km/hr. without any fuss.

I reached a top speed of 90 km/hr. and since I ride only in city, I did not get an opportunity to push it beyond. The bike will easily cross 110 km/hr. with the engine designed to output the peak power at the highest RPMs.

The Mono Suspension in the rear offers good ride. The MRF tubeless tyres come as a boon with its highly superior road-grip and the superb cornering abilities. I will always be confident while cornering at 60+ speeds. The low centre of gravity helps the cause. The Front shocks are not beefier like the FZ-S though.

The seating is a bit of set back and is not suited for long rides. A thicker seat and more cushion could have been suited for long travel. With the Dazzy coming up with Front and Rear Disc brakes of 240mm and 220 mm respectively, braking is hugely improved over the CB Unicorn.

Overall, I can say that it comes with a decent package in the Ride and handling part.

Here comes the most important part. Mileage is one of the critical features to be considered to buy the bike. My Dazzler gives me an astonishing mileage in the range of 53-58 KMPL in city.

The maximum mileage I got was 59.5 KMPL and the minimum was 49.8 KMPL. Overall, I bet that this is the most fuel-efficient bike in its class. I drive at speeds ranging from 45 KMs to 70 KMs most of the time. 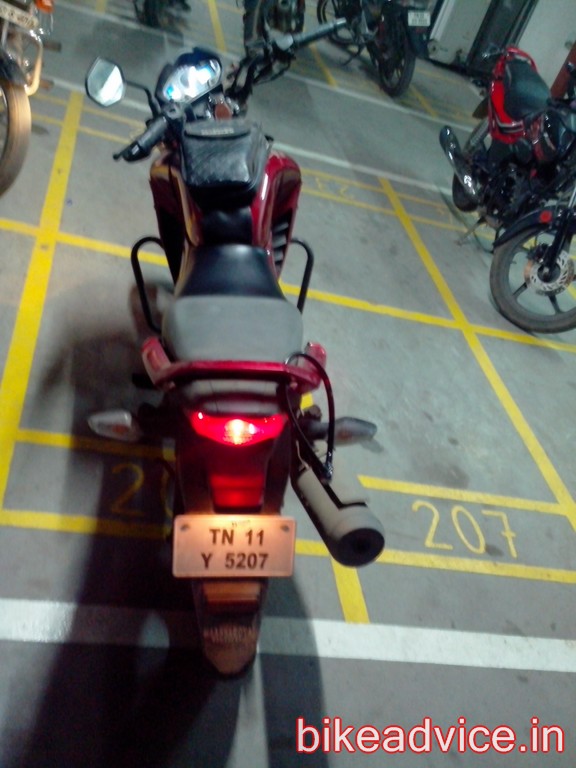 Did not get a chance to ride the bike on highway and hence posting only the FE figures in city.

How to maintain a good mileage in Dazzler?

The Running-in period is very crucial. I have maintained the engine in the 3000 to 3500 RPM range and 40-50 Kmph speed for most part of the first 1000 KM run. Do notopen the throttle unnecessarily. After the running-in period, I used to increase the speed gradually, reach 5000 RPM and have a great ride from then on. Following the above will make the bike to return decent FE figures. Also, I have serviced the bike as per the scheduled intervals without fail. Love the Dazzy and it loves you back.

Finally, thanks for your time to read the review. Happy biking. Vroooom……