It was just a matter of time you saw this news. Since the launch of the new revamped and bigger 110cc Activa, speculations were ripe of a new Aviator and finally HMSI (Honda Motorcycle and Scooters India) has launched their premium scooter, Aviator with a new mill replacing the older 102cc to a bigger 110cc borrowed straight from the (new) Activa. Honda is already the segment leader in scooters in India with the largest selling Activa as their flagship model. Aviator is the youngest scooter in the family and is becoming big time popular because of its fantastic looks and some innovative features pegged onto it. Aviator, probably is the best looking scooter in town and with a new potent mill, the game has just begun. 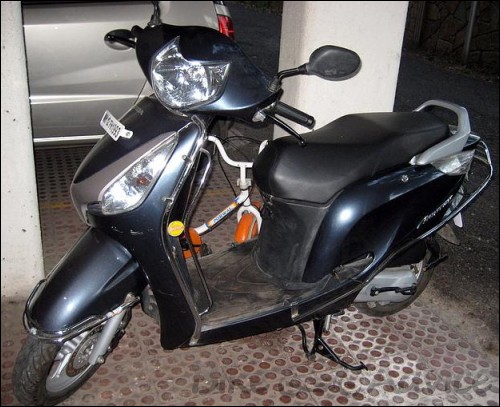 The changes in the new model include:

Masculine Styling: The scooter has been given some fresh tidbits here and there which make it look even more appealing and luxurious. The scooter has an elegant chrome plated front cover, body colored grab rails and garnished instrument panel along with the alloy wheels which make it a stunner to look at justifying its tagline “Live Your Style”. Sadly, all these are limited to the Deluxe version only.

Bigger Engine: The scooter gets the fantastic 109cc mill directly lifted from the Activa which produces a peak power output of 8.1 Ps @ 8000 rpm and 0.9 kg-m of torque @8k rpm. This simply implies that the scooter is now more nimble, zippier, can pull loads effortlessly and the best part is it is more fuel efficient as well. Honda has claimed a 15 percent increase in fuel efficiency with this engine.

COMBI BRAKES System: Again a direct lift from the Activa, the scooter also has an innovative Combi Brakes system feature. Two wheelers come equipped with two brake levers for front and rear separately. Majority of the riders in India apply rear brakes only and do not apply front brakes fearing a skid or fall. However, for an effective braking both front and rear brakes should be used to stop safely and at the desired point. Combi Brakes system is a technique by which, both front and rear brakes get activated jointly in right proportions. The rider need not worry about effective stopping, as both the brakes would be applied in the correct amount automatically when only the rear brakes are pressed. Added to this, people also have an option of a 190mm front disc brake (with 3 piston calipers). Though the sad part is that both these features are available only in the Deluxe version.

Viscous Air Filter: The scooter also gets a new viscous air filter which is more efficient in catching dust particles, impurities in turn enhancing the life of the filter which means that the maintenance costs are also decreased as the filter requires no cleaning and is a long lasting part as well.

Maintenance Free Battery: Latest edition of the scooter also gets a 12V 3Ah maintenance free battery. Say NO to frequent top ups and leakages as the new battery is safer and lasts longer than the conventional batteries. It also ensures that you never run out of power in stop and go traffic under sudden stops and starts.

Two Variants: The scooter is available in two variants, Standard and Deluxe. While the Aviator standard comes at a price of Rs. 45,180, the Aviator Deluxe is priced at Rs. 50,410 (both) ex-showroom Mumbai. The prices are definitely on the higher side and with the addition of road taxes and other payable stuff the on road prices for the scooter would be almost half a lakh in every city (with the Deluxe version costing in excess of it) which definitely makes it on the expensive side but with a plethora of new additions, telescopic shock absorbers, Puncture resistant tube, comfortable ride, fantastic looks, Honda’s reliability benchmarks considerably reduces the justification question. And with some stiff competition in the form of Rodeo and Duro from Mahindra and Access 125 from Suzuki, selling such a expensive product might turn out to be an Achilles Heel for Honda!