How many of you paid heed to February 2012 figures? If you did not, there is a possible chance of turnaround in the rankings on how the 2-wheeler manufacturers stack up in terms of sales in India.

The first turn around was that Honda displaced TVS for the number 3 spot. Actually, it’s not the first time Honda has reigned supreme over TVS, it (Honda) has achieved more numbers previously as well but now considering the gap between these two, it could be considered that HMSI is the consistent Number 3 in India.

And the second turn around has not happened yet, but if Bajaj doesn’t react quickly enough, we might have Honda displacing Bajaj and joining its erstwhile partners Hero MotoCorp for the top two slots in our industry.

If we talk about figures then it’s not a pretty sight if Bajaj is to be looked at. While Bajaj’s local sales stood almost flat at 2.04 Lakh units for the month of February 2012, Honda was twisting its tail at a meager distance of 7000 units, as they jumped to a whopping 1.97 Lakh units for the last month. The bigger point worth consideration is that these figures are despite the fact that Honda is yet to launch their proper entry level commuter bike – Yuga 110.

However, a bigger picture clears the air about this change happening anytime soon. For the complete financial year from April 2011 to February 2012, Bajaj Auto is comfortably ahead of Honda by around 5.73 Lakh units. 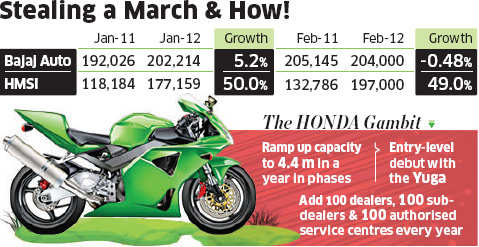 Bajaj has been cool, or at least that is what is being displayed upfront. With as much as 35% of products exported, the company feels that they should be looked at as a global player. “We are a global company and believe our performance must be viewed in that context. In that sense we are, we believe, the world’s most profitable motorcycle maker, and third largest by volume.” company says.

On second thoughts, Bajaj also has a few aces up there sleeve. The much awaited Pulsar 200NS has already received big time applause and is expected to be a big time success. The company also has plans to launch a commuter motorcycle to garner some more units.

Also, it’s not that this is the first time we have seen close contests like this. A few years back Bajaj went precariously close to (then) Hero Honda but till now has not been able to break any ground. Will Honda be able to dislodge Bajaj from its kingdom?

Do check back our monthly sales figures for the month of March 2012 to analyze how these two companies are stacking up against each other.