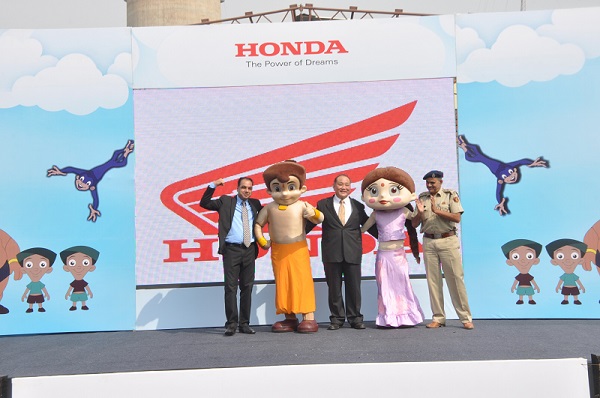 Along with being very aggressive with launches and expansion, Honda India is also laying special emphasis on spreading awareness about traffic safety in our country where it is needed the most.

They in fact, started their global traffic safety campaign way back in 1970! India being an important market, the company has been conducting several awareness initiatives to spread a word about being safe on the roads. One such was a road safety awareness drive for children at Dilli haat, Pitampura, with the help of famous cartoon characters Chhota Bheem and Chutki . The event was attended by Mr Keita Muramatsu, President and CEO, HMSI and Mr YS Guleria, Vice President, Sales & Marketing, HMSI.

It has often been seen that the children act as the consciousness police of a family. Whatever they say as a moral brigade for the family is quietly accepted by all the members of the household. So if children understand the true essence and requirement of traffic safety and the need to follow traffic rules then the chances that people will obey rules while on the road increases manifold.

Some 1,200 families were a part of this activity and spreading the message of traffic safety in a fun and engaging way were Chhota Bheem and Chutki. Even adults were not left bored. They were briefed about correct riding posture and healthy road safety habits such as obeying various traffic rules. They were also taught the importance of wearing protective riding gear and helmets while riding.

The most popular activities of the campaign included cycling, the road safety drawing contest, a pledge wall, a photo opportunity and collection booth; and a digital desk for uploading pictures to guest’s Facebook page