Hi, this is Sharat here. Well I am a final year degree student now. My passion for bikes started right from my schooling days and learned riding a bike when I was in 8th Std. Since then the passion for bikes never stayed the same, it went a notch higher with each day and now I am a complete devotee of bikes. I am a hard core fan of bikes and I never get bored of riding. 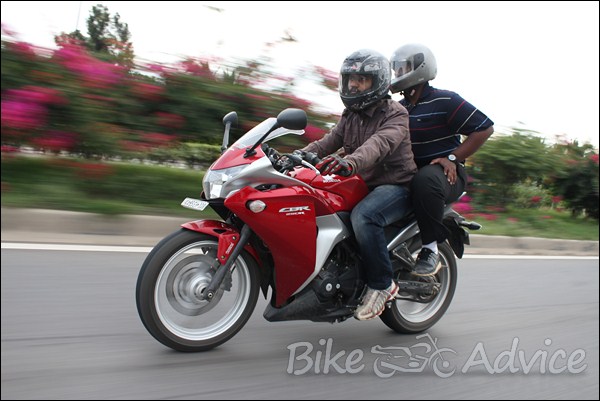 Well I have a Pulsar 180Dts-I along with my baby fire blade. I have done more than 1,00,000Kms on my Pulsar and still running in very good condition with a beautiful average of 53+Kmpl. That was the 1st model of the DTS-I which I got with the spoke wheels. This is the bike which I used to start my biking journey.

Selection and Pricing of the bike

Then the day came where we decided to get another bike, while Royal Enfield was the 1st thing me and my dad had in mind. My dad had eye on Royal Enfield even at the time of purchasing Pulsar. But I had pursued him to purchase Pulsar. Then Honda announced the news of launching CBR250R in India with a very aggressive pricing. Compared the bike head on with all the other bikes and felt, this is the bike designed for me. The bike costs 1.99 laks ( C-ABS Variant) on road which is higher than the normal commuters’ bike and way below Ninja 250 which is the only so to say the competitor in this segment.

My dad booked for the red C-ABS model in the 1st week of April and kept it as a secret from me and kept on telling that he is considering whether to go for RE or CBR. Somehow after one or two months he told he has booked. That was the moment I jumped in joy. From then; it was the worst period of my biking life waiting for the bike for the next 2-3 months. 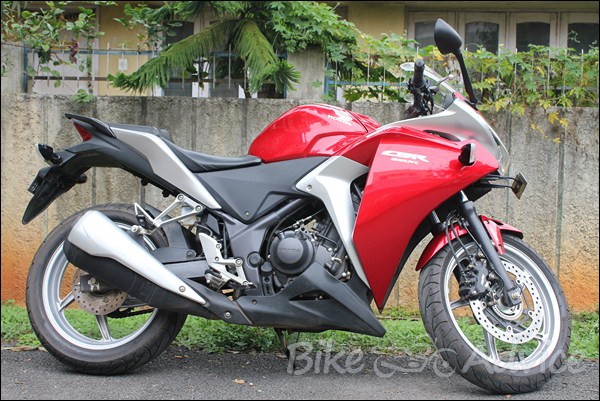 During that time I had made a hell lot of calls to the showroom asking for the bike n wrote letters after letters, mail after mail for the Honda requesting for the early delivery of the bike. Mean while myself and my dad went on research, regarding precautions to be taken during running in period. We were regularly chatting, exchanging websites, discussing in this regard.

Finally the day came when we got a call from our showroom saying, “Sir, your bike has arrived. Pls come and collect it.” That was the time when I was dancing all around. Despite very low attendance, without any 2nd thought went and booked the tickets for Hubli as I am living in Bangalore. 20th July, that’s the date which changed my biking life. 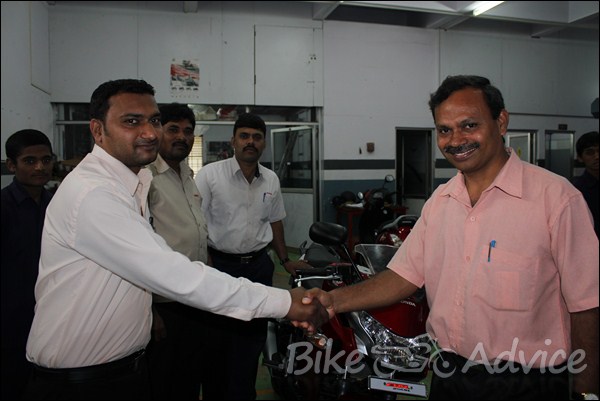 We went to showroom early in the morning even before the showroom was opened and was waiting for the officials to come. Once they came, we were given a royal treatment in the showroom as that was the 1st ABS model being delivered in that showroom. All in all I was feeling like the king of the Universe then.

Running in period and oil changes

This was the time when I was feeling very difficult to ride the bike. Though the bike had so much of power between my legs, I had to keep it in low speeds. I rode the bike in a max of 4000RPM for the 1st 750Kms. Went up to 5-6K RPM till the end of 1700kms. Took it to 7.5K RPM for the next 1000kms and then on used the complete band for some time. 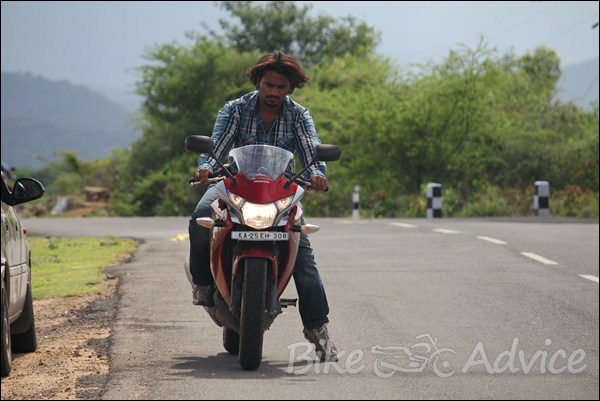 I also changed engine oil and oil filter after 50kms, around 300kms and then around 700kms. At the time of 1st service at around 1200kms. We used semi synthetic oil all the time. Changed to synthetic oil after 3000kms, now the engine is very smooth.

This is the thing which stands a class apart from the other bikes. This is the best kind off engine I have ever seen or rode. Very smooth even at higher speeds like 150+ and has no vibration. Stable as if it is in idling. 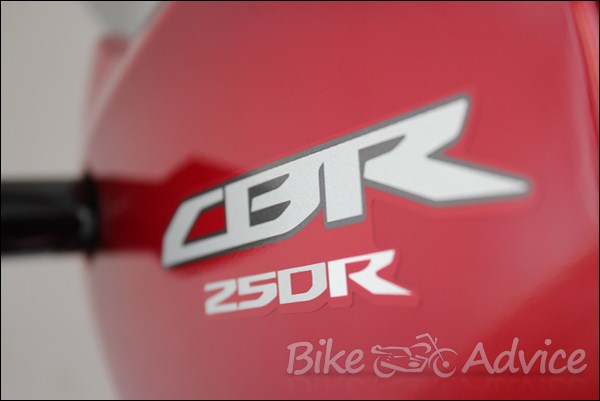 This has a fuel injected engine which works like a normal commuter bike below 5K RPM and is the beast above that level. Its a kind of bridge between the city bike and a highway beast.

Redesigned from VFR 1200R, has an amazing design which attracts eyes of everyone, even those who are not interested in the bike. Where ever you take the bike, on road, in parking lot, in Petrol bunk, in signals, people are enquiring about the bike. 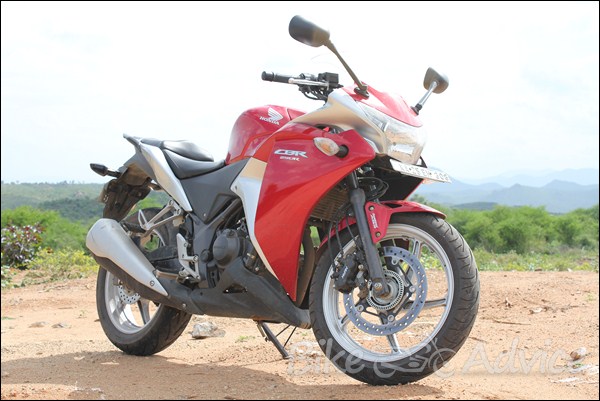 I feel the pride when it catches all the attention of people passing around when I am riding on the bike.

The 140mm rear tyre is the highest of this segment, which offers a great road grip. I have taken this bike out for a spin when I am riding it in heavy rain and attacked the corners at 140s and the bike never lost any balance and was completely stable. The cornering feels a little bit sloppy when you are having a pillion and in high speeds, but better than any other bike which I have rode. 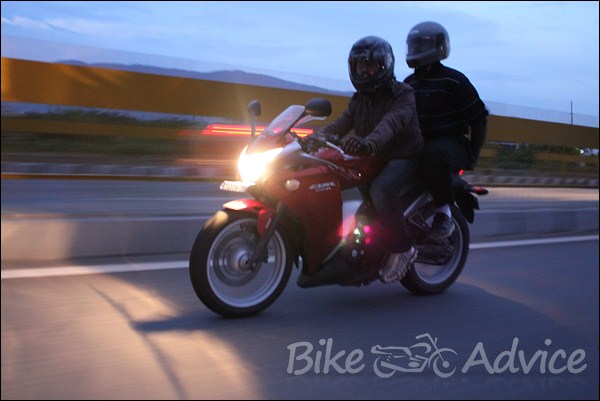 The suspension works great as I have taken it into a few path holes at high speeds and I didn’t receive any kind of shock, I just heard the tyres sound of hitting the pit and up. Also I must mention that, when I took this bike on thick wet muddy surface, the bike never moved away from its lane and did exactly what I wanted to do and never lost balance. Weighing around 180kgs, the bike never feels heavy and feels very light while riding it.

The real big fat rubber offers a great road grip. I have a feeling, it could be soft tyres as I feel the bike handles better when the roads are wet. (My personal opinion based on my experience.) The breaks are the best feature of this bike. Honda is well known for its safety and proves here too. Since I own a C-ABS, never gets afraid of high speed. 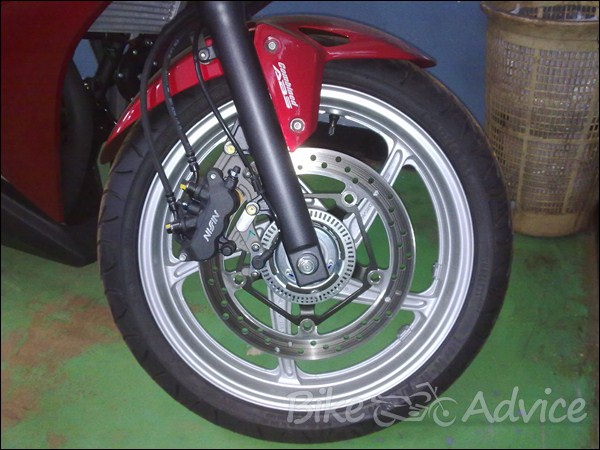 That’s the confidence I have on the breaking system. Once I was doing more than 120s and I had to break suddenly in a highway. And when I did that, the bike just came to stop in a few Mts which is very much less than half of the distance which stops a normal bike like Pulsar or a FZ or a Karizma, that too on wet roads. 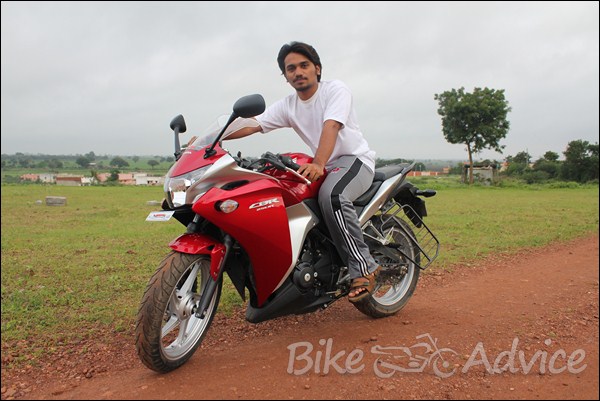 The bike never lost balance even though I have tried this many times. It is very stable even during hard breaking and never skid.

The riding position is amazing and feels very aggressive and comfortable. Have taken this bike out on a ride for more than 600Kms a day and I and the pillion had nothing to complain like back ache or butt ache. 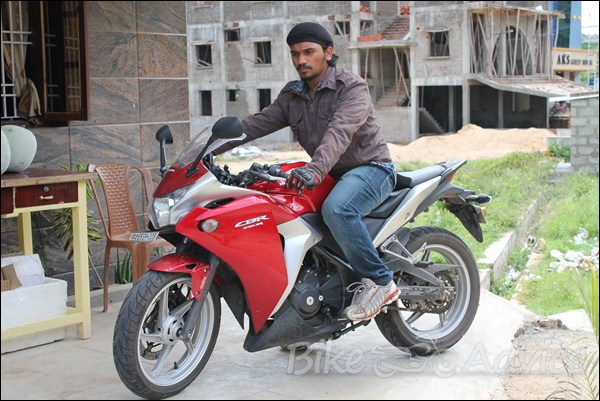 This shows the amount of comfort the bike offers. The wind direction is also superbly done while it flows to the face and upper chest making it feel like we fly while riding.

A HID with a projector would be a killer, but still the 55Wt halogen bulb works great. The reflector in the head light is really amazing. I am wondering whether it is 55 Wt halogen bulb. I had to Google it out to confirm it is 55wt bulb. The dash board looks great with a cool blue and gives feel of flying when cornering and riding it at high speeds. 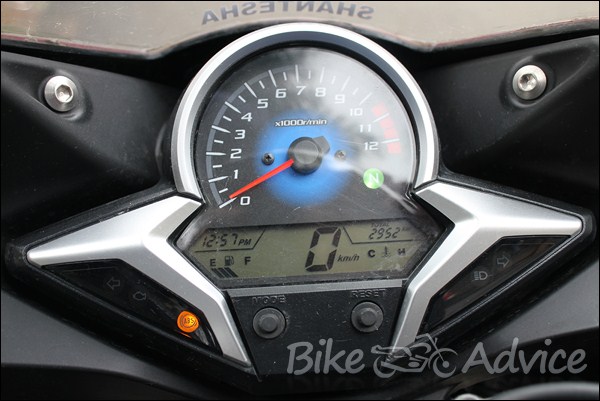 The 22,900 Nm torque and 27 BHP offers a great power and pick up. The power is simply superb, just pulls like a dream. While I want to overtake, will think twice if it will be possible or not. 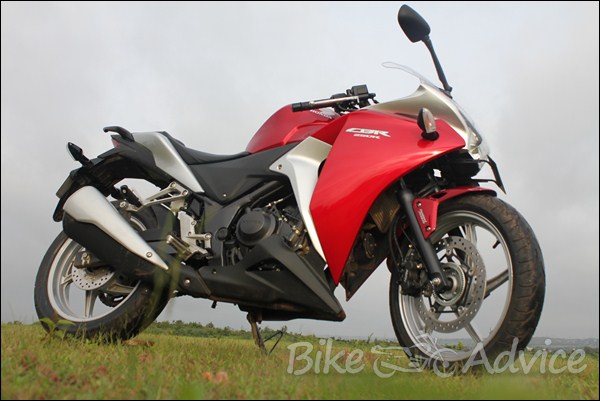 But practically when I try that, would have completed the act a lot easier and would have done that in half of the distance which I personally would have thought would be required to overtake.

This is the most common question I am asked by the people checking out for the bike. I am getting up to 38kmpl on highways and sometimes even more if I ride it without pillion and giving proper respect to the RPM meter. 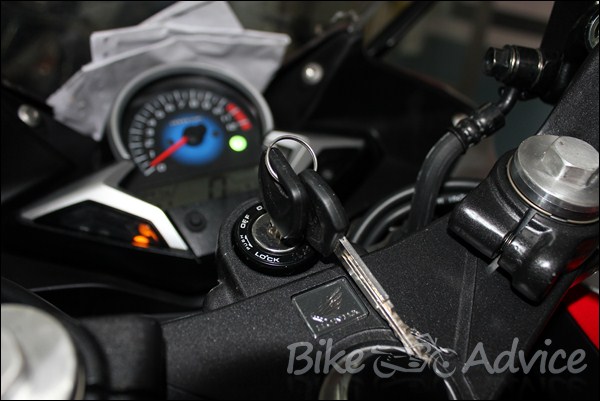 While in cities I have to ride the bikes in just 1st 3 gears and if shifted higher, must break and down shift due to traffic, signals, speed breaker, etc. I am getting about 30kmpl+ in Bangalore city traffic which I feel is very good for any 250cc bike.

I have done more about 4500kms on this bike already and have possible taken the bike to all possible terrains. Smooth tar roads, wet roads, muddy roads, on stones, hilly regions, etc. Other than on small stones or pebbles, the bike never loses its grip and is a great machine to ride. I have never faced any kind of problems on any surface, other bumper to bumper traffic in Bengaluru, feeling the machine is not made for these roads.

Flaws in the Bike

Well every bike has some or the other flaws and CBR is no less.

Whatever the flaws are, the bike is just amazing and feels great to ride. Every bike has its cons, but the pros of it just make the Cons ignorable. I love this bike since I heard about this bike, and my opinion on it will never change. 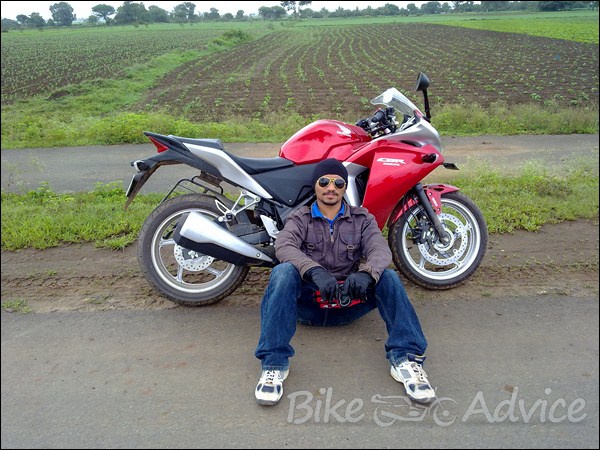 It seems to be little expensive, but after a little research and spending some time with this bike, I am sure each and every one, would say its worth every penny spent on it.