Every single bike maker in India has atleast one product in the 150 cc segment. This is the reason why there is a fierce battle right here in this segment, just like the Premium hatchbacks in the four wheeler passenger car segment. 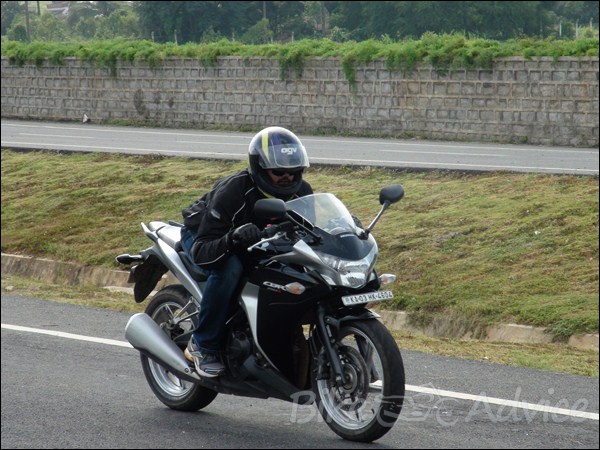 Taking the present scenario into consideration, 250 cc bikes are the very next leap for those who are fed up with the (traditional) 150 cc bikes. India, at present can only boast with two 250 cc bikes and the best part is that both these bikes are Japanese by nationality. One being the Kawasaki Ninja 250R and the other being the Honda CBR 250R, both being International models and successful as well.

I, for BikeAdvice reviewed the latest offering among these two which is the Honda CBR 250R. Here, in this post I have consolidated my insights along with incorporating the bike’s review.

It’s very mandatory for a bike to impress the rider, right at the very first sight and not every bike does it well. The Honda CBR 250R has got that hot looks to tempt you to get your hands on her. I would not say that the bike is completely sporty and is capable enough to boast about its size. The visual looks are really cool and Honda has proved the point very well that it’s not the body graphics which determine the looks of the bike. There are two powerbikes from Honda that can be seen within the CBR 250R. The front fairing of the bike is the exact replica of the VFR 1200F and the rest of the body gives you a feel that you are in a bike which is inspired from CBR FireBlade. It’s in fact ideal to mention this bike as ‘Baby FireBlade.’(How is BFB? It’s a TLA – Three Letter Acronym!) 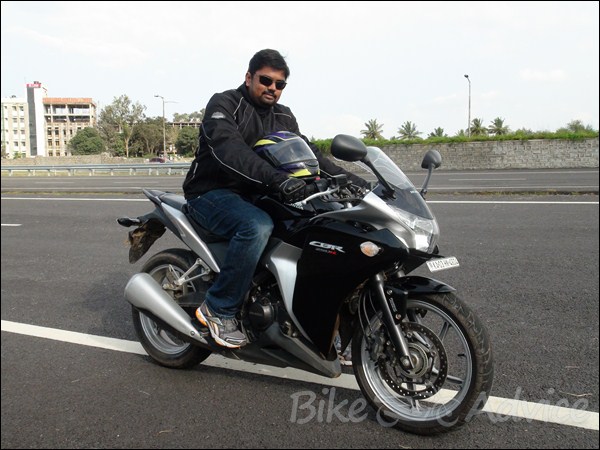 The design of the bike is not perfectly racing inspired, but offers the best of looks. The two tone colour scheme is made standard in all the three colours available in India.  The colours of this bike also reminds the VFR 1200F. The VFR is available in 2 colours schemes and both these schemes of Candy Prominence Red and Seal Silver Metallic are as such incorporated in the CBR 250R, though there is an additional colour of Black as well. The CBR 250R is one of the few bikes in India which looks stunning when seen from any angle, irrespective of it being front, rear or the side.

Impressiveness Of The CBR 250R

The Honda CBR 250R is very impressive in almost every single factor that we’ll talk about in the following paragraphs. The exhaust shape is very gorgeous and the stainless steel coating on it adds beauty to the beast.

The 4 stroke Liquid cooled engine with a displacement of 249.6 cc does a brilliant work under the frame. It aids the bike in providing a smooth ride without any vibes observed, thereby paving way for a brilliant riding experience. It offers a power of 25 bhp, which makes the bike really fun to ride and despite the fact that the CBR is to be pushed with full throttle at higher gears, I loved revving up the bike in first and more in the second gear. 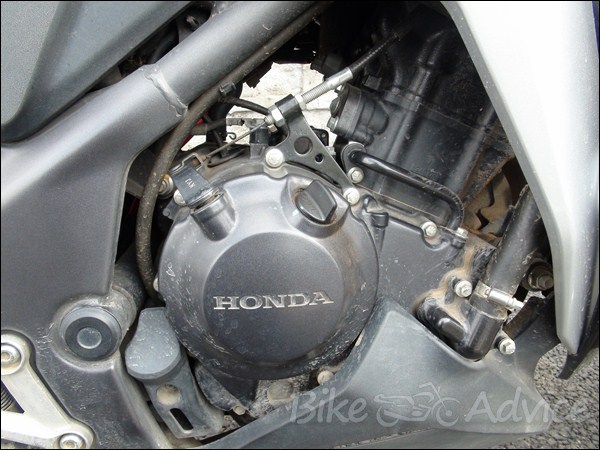 This is exactly where the power is felt. As in the case of every high performing bikes, the CBR 250R is also fitted with Fuel Injector and to be even more specific, it houses the PGM-FI system which is Honda’s FI incorporated in most of its bikes across the globe. This aids in the bike’s decent fuel efficiency despite its high displacement.  Riding it for just a short distance is enough to make you realize the power and potential of this bike. The engine alone (as most of your would have known by now) has as much as 9 patents registered. Honda’s engines are always highly trusted across the globe and the CBR 250R is no exception to it. I was able to feel the heights of engine refinement as I tested her.

Size is Inversely Proportional to the Handing

This is the most interested part any review writer would be interested in. I rode this bike along the open highway at both low and high speed, apart from the regular Bangalore city traffic too. The bike is capable of handling brilliantly, irrespective of where you ride this gorgeous woman. Along the highway, its well designed aerodynamics minimises the air resistance considerably if leaned forward and this can be clearly felt (and enjoyed too!). It’s size is inversely proportional to the handing. Would anyone believe when I say this? But, it is true. The machine is pretty big but handling is comfortable to the core.  The wheel base is another important reason for the bike’s stability at high speeds. It never makes you feel scary. The cornering capability of this bike is also stunning. Agsin, the wheelbase makes the tyre gets gripped on to the tarmac, thereby offering a great cornering experience. This made me feel that I’d rather tested this bike in Chennai or Coimbatore so that I could have tested this ‘Baby FireBlade’ in the closed track, which is yet another ideal place for this beast.

The bike I tested for BikeAdvice is the top end variant with ABS. It was indeed great fun to ride a bike with ABS. If you wanna experience what precise braking ever means, this is the machine to be tried. Get your foot set on the brake pegs, hands on the clip-on and throttle her up and up and up. Then you gotta brake her hard. You’ll notice that the bike comes to an instant halt without pulling the front wheel up. Oh, that was great man. I tried pulling the front disc when I was at 120 kmph and what I saw was amazing. Within a fraction of a second, I saw the digital speedo showing 72, 48, 22 and the bike halted. 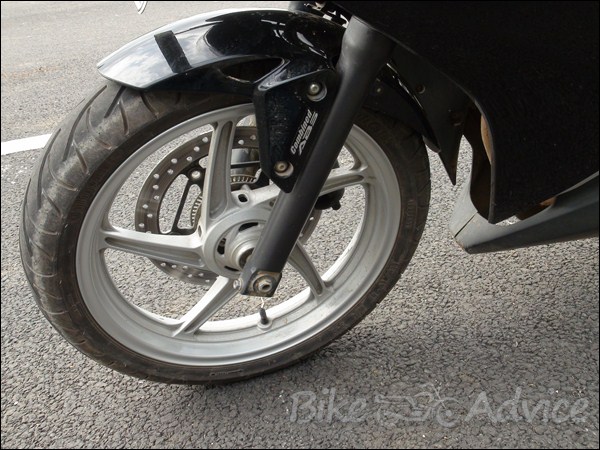 With a Combined – AntiLock Braking System like this, the confidence within you will increase manifold when you rev up this bike along the open highway. Coming to the wet road part of it, there was a small patch or road along the Bangalore – Mysore NICE road which was wet (It is another different story that I went hunting for a wet road for miles together just to brake the tyre).  Everybody knows the fact that the bike would not skid and that’s what the ABS is for. But, I’ll have to also tell you that the braking was as precise and smooth as it can be on a regular surface. This C-ABS adds another feather to the Honda CBR 250R’s crown, apart from the rest of the features that this bike boasts about. To end with, lemme tell you that ABS cannot be disabled in this bike unlike the Apache RTR with ABS. 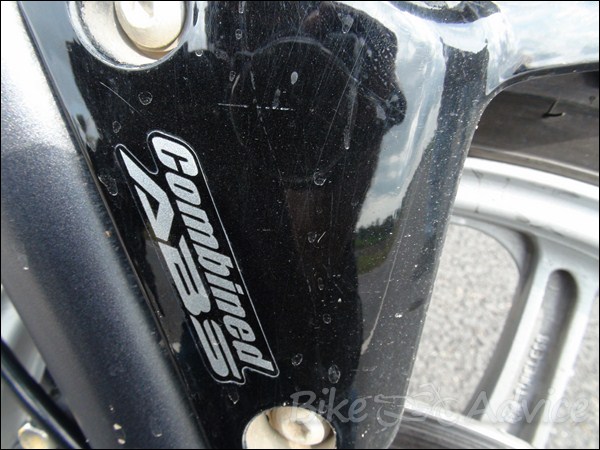 The Instrumental cluster is neatly laid out and the design matches flawlessly in the gap between the headlamp fairing and the clip handlebar. The speedo cluster is a combo of analog and digital meters. The major area is covered by the Tachometer which is the only analog meter out here.  The rest is all digitalised. The silver coloured finishing adds more beauty to this machine. The best part about this cluster is the Blue backlight that is offered by Honda. 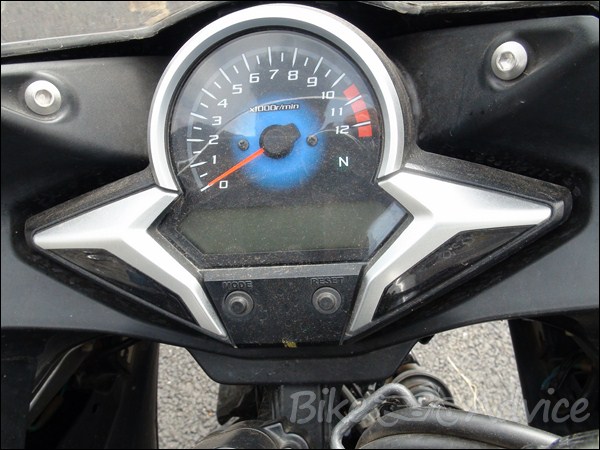 This makes the meters look very clear even when the bike is being used in the night time. It has a fuel meter, speedometer, trip meter and a clock. But, there is one small feature which disappointed me. Unlike every other bike here, the CBR 250R houses only one trip rather than two in most other bikes.  But, there are lotta people who don’t make use of the second trip, so this should not be an issue for them. But, for someone like me who makes use of both the trips during long drives. But still, it’s unworthy of blowing this issue now. The clock is very utilitarian and kudos for that. The headlamp is another factor on this bike you can really depend on. The 12V 60/55W H4 lamp offers confidence to you during night rides and this is one area where many bikes lag. 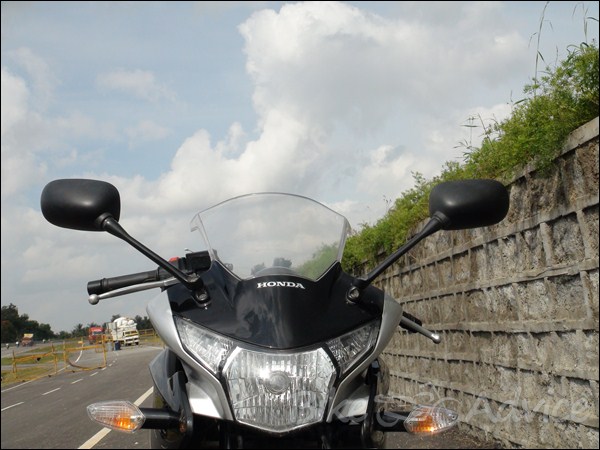 I know that there is no word like this (Speedability) but still it conveys what it intends, right? Well, this bike is capable of touching 100 kmph within short strips, which is enough boast about its ability. I pushed this bike to 148 kmph and the bike didn’t just seem to pant and puff. 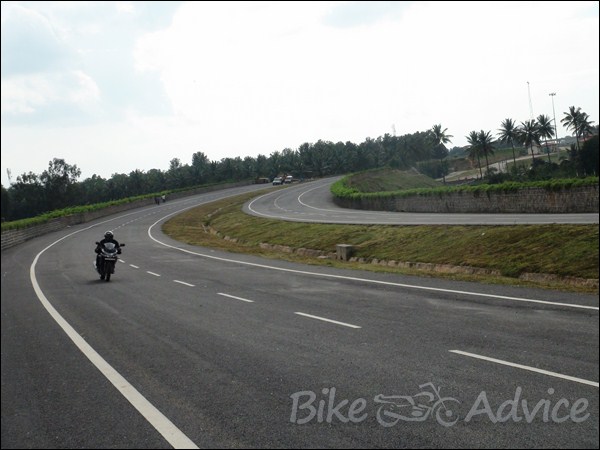 There was still a little throttle left but the traffic flow grew over a period of time which restricted me from pushing her still. There are users who have crossed 150 mark with this bike, which clearly proves that speed is just not at all issue to be worried and hence this is an apt bike for ‘SpeedManiacs’ who consider Speed as an important criterion. The rear tubeless tyre with a dimension of 140/70 17 plays its role very well here. 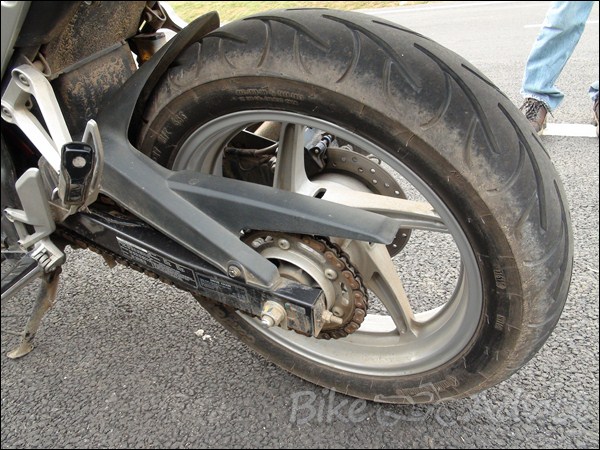 City Slicker or Racer or Cruiser?

This is the most difficult question to answer. Hmmm, but still lemme try. The bike is capable of commuting easily despite its heavy size. But, why do you need a 250 cc bike for merely commuting within the city limits? But, surely for the other two options mentioned, the CBR 250R can carry both of them very well. 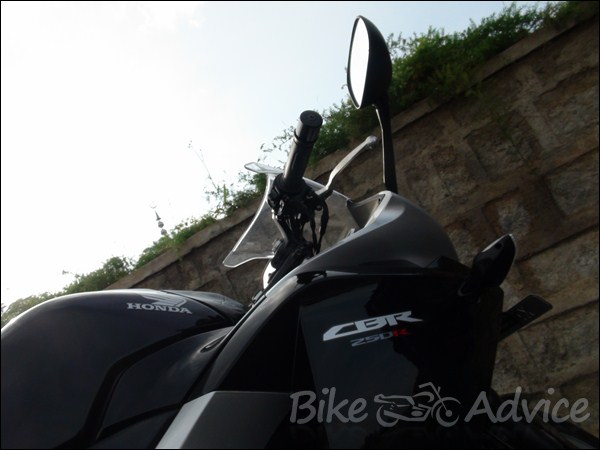 Yes, its amazing cornering ability combined with the high performance delivering engine, it can bring out the racer inside every biker.  This bike is also an amazing cruiser. The reason for this is its seating position which leaves you with no back ache at the end of the day. It is also to be specially mentioned that neither the engine nor the body parts vibrate at any point of time and at any speed as well. This aids in better dependability of the bike which is very mandatory for a bike used for long rides.

Despite all the above mentioned appreciations for the bike, there are also a few drawbacks that are to be rectified by the company (atleast) over a period of time. 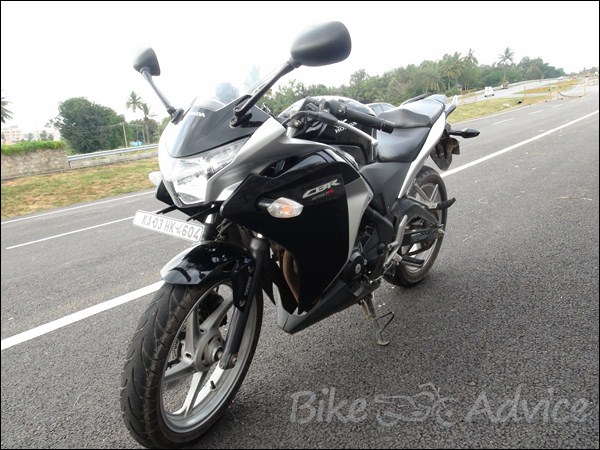 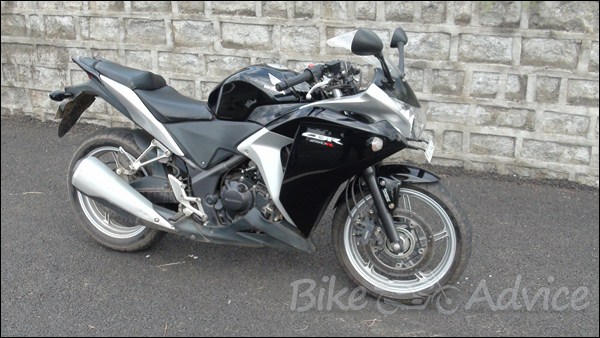 I am least interested in boring you guys with a detailed spec sheet out here. Here is the link which will navigate you to the Honda CBR 250R’s spec sheet. 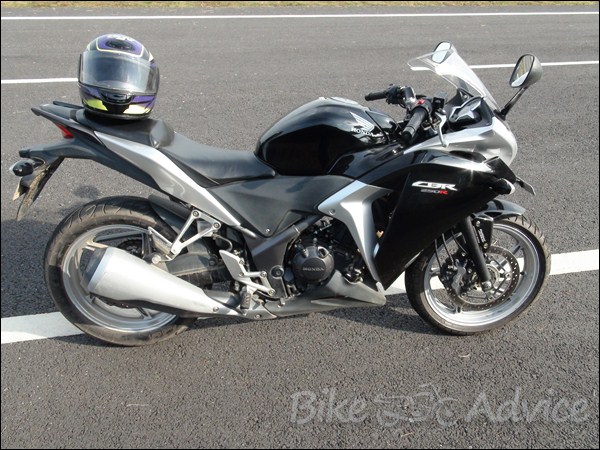 Finally, India has got the bike which is a perfect all rounder along with the peppiness to make the rider go mad as he rides this mean machine. Though, the cons of the bike are few in number, the delay in waiting period adds woo to the customer. It is high time for Honda to concentrate on this issue and resolve it as efficiently as possible. 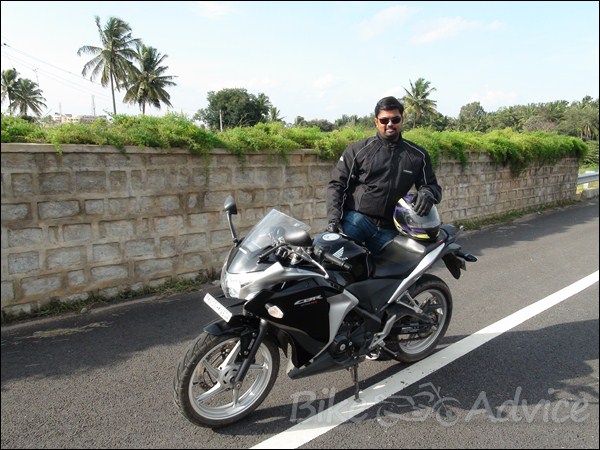 BikeAdvice Score: 4.5/5 and I’m happy in offering this bulk score for the Honda CBR 250R.

BikeAdvice thanks Mr. Diwagar from Bangalore for having shared his Honda CBR 250R with us to come up with a detailed review of India’s (once) most hyped bike.