Hi, I am Pranav Kelkar, from Thane. I own the New refreshed Honda CBF Stunner, and I am fully satisfied with it and this is my first ever bike review. After our Kawasaki KB100 stopped roaring like it used to do early, there was a purchase decision made in my family. Finally dad agreed to buy me a new bike! And most importantly, I was going to enter the biking world with that new bike. I was a beginner in biking about 3 months ago or so. I tried Bajaj Pulsar 150 and wasn’t comfortable with it at first hand itself. 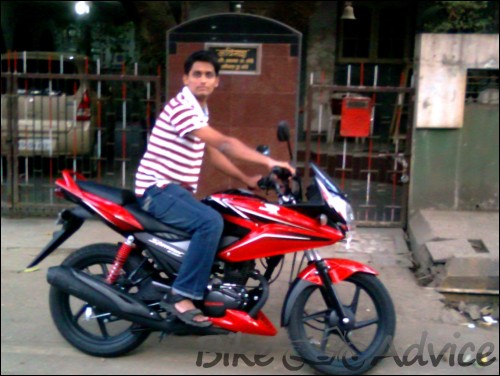 Then my Dad came up with a rule: “No 150cc & above engines” I tried convincing him but resulted in no use. But, after that I agreed to that term, looking at economical side of the stipulation one must look at Fuel Efficiency also if you have someone ‘Dear’ as pillion. Being a young blood, I hesitated on sporty looks, and performance. Finally we decided on 125cc segment but with a rule to give Fuel economy near to a 100cc, but now my task was choosing a bike which comes near 150cc in performance and Sporty looks.

The options I had shortlisted were:

After Long research, I found Gladiator, Shine and Stunner worth buying, considering both my dad’s and my needs. I personally prefer Honda and Yamaha over other companies considering the Brand, Quality of parts, and almost zero maintenance. When I personally visited showrooms of Honda and Yamaha. I was in love with the beauty of ‘Honda CBF Stunner’. Then something struck me, why would I choose shine if I have similar 125cc engine, with awesome looks and add-ons? So, my dad took a test drive of CBF Stunner, and was quite comfortable with it (it was an old model but still loved it.)

Decision Time: As the competition was really tough, with both the stunner and Gladiator had their own pro’s and con’s. We finally chose CBF Stunner over the Gladiator for many plus points which will also be discussed in the review. After all I had to choose a 125cc which comes close to 150cc in performance, and looks sexier than regular day-to-day bikes! Finally I booked Honda CBF Stunner, and paid 2k more on the price what I’d booked it for. But it wasn’t a wrong decision for sure. I got the new refreshed Honda CBF Stunner which is the First bike delivered in the state.

Tachometer: Finally something that was only owned by Premium Bikes in the past!
New Engine cowl: Pure element of Attraction.
New Graphics: Made me keep drooling over my bike.
Half Chain cover: Sporty Trend amongst the Young Generation.
Sporty RVM’s: Haven’t encountered such amazing RVM’s till date.
Black Engine theme: That’s what I was looking in for old Stunner.
Bar End weights: less Vibrations.
No Kick- Lever: Again borrowed from the premium segment.
Maintenance Free Battery: No more electrolyte topping up or leakages in the battery.
Viscous Air Filter: Less maintenance

I was very much happy and satisfied with the features I got at the price of 59k OTR. I chose the best 125cc in almost every aspect. I have completed 1000 kms till date, and I think I am the first ever reviewer of New Stunner! Here is what I feel about my machine till date. 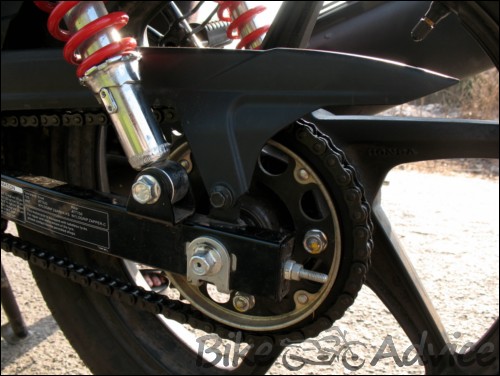 Styling: The best looking bike in its segment. Probably the best looking bike in Indian market. Though reviews are personal again and Yamaha R15, Hero Honda Karizma and few high budget bikes are better though, but what more you want in 60k? While riding I encounter lot of questions from various people asking; “Is this a new 200cc? From where did you modify your Stunner? And what’s the cost? Whopping 80k? And more questions. The bike is a pure reason for a Head turn! I have seen very few new stunner’s on road; it feels so unique to have a machine which most of the crowd doesn’t own one now. Overall Black theme attracted me the most added with the new Engine Cowl is a cool add-on. Overall Styling is the key feature of CBF Stunner. A must have for every college hunk! 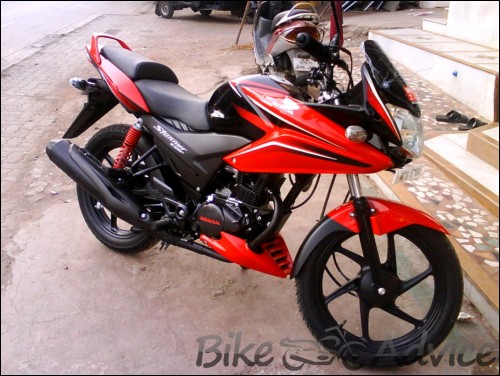 Handling: Only bike having separate Handlebars from dashboard in its segment.As I was very much in a need of a easy to handle bike and as Honda’s CBF Stunner 125 has proven it ability by winning the ‘Best Machine For New Riders award (14th Motor Cycle News (MCN) Awards.) It’s truly an easy to handle machine as both my dad and I found it very much comfortable. Separate handle makes it easy to ride in the traffic.One can turn the bike with the slightest force because there is no dead weight of the dash board and headlamps clinging on to the handle bar. Seating posture is sporty with those rear set foot pegs but even after continuous long runs the bike feels relatively comfortable. I have done a 150kms ride with pillion; it was a comfortable and joyful ride. Bike feels much planted while cornering. Both shocks are fit for their work and do their job pretty well. Fuel tank is well constructed for knee placement with which long rides are much more comfortable but being 125cc, bike isn’t much powerful, but is best in its class. 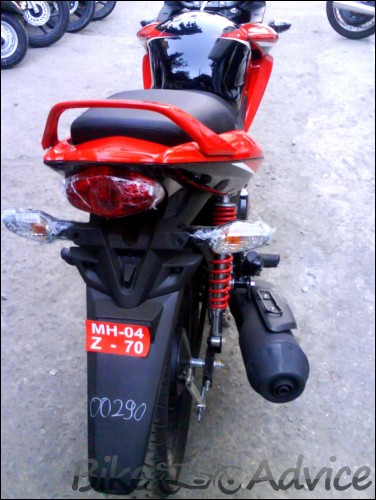 Performance: Highest bhp Churner amongst bikes available in market, in its segment. CBF Stunner roars 11BHP @ 8000rpm, with an acceleration of 0-60kmph in 5.2 seconds. Gears shift are smooth and gives exactly the same Roar I was looking out for. On the other side, the engine is not that smoother on high speeds, but for 125cc, its best one can get and I have managed to touch 105kmph.But being a new engine I’m not putting all that pressure as I feel it has to still run-in. Braking is excellent and works like charm. Another feature is the Tubeless Tires that made my Dad say yes to this beauty. 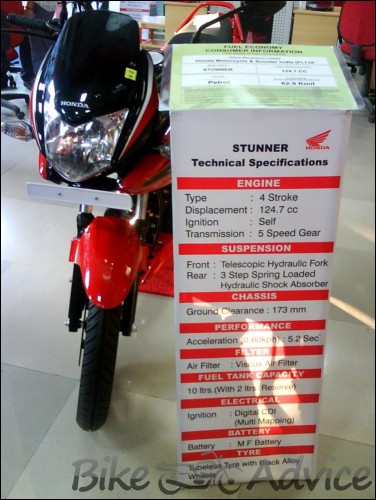 Fuel tank capacity is 10 liters having 2 liters of reserve. CBF Stunner has 5 speed-gears, which is rare in 125cc segment except the new platina. If you are at high speeds, you’ll surely think about having a 6th gear, but it’s better than having just 4 gears. As bike has a heavy-duty maintenance free battery, absence of a standard kick lever shouldn’t make you worry and neither did I. I start my bike without choke at morning, and it comes to life at first crank! Newly Added Tachometer helps in maintaining proper rpm getting utmost performance out of the engine at the right rpm. Tachometer is most wanted feature in old stunner, and Honda just got it at right time now. Stunner is basically categorized as a commuter bike, but I see nothing wrong categorizing it as a performance bike in its category. The bike comes close to gladiator in performance. But 5 gears, tubeless tires, maintenance free battery surely makes Stunner worth buying. 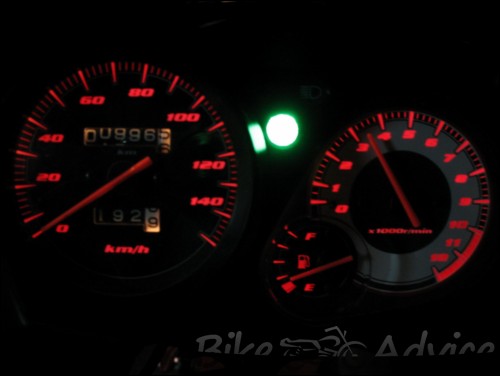 Mileage: My CBF Stunner has served me with about 60kmpl during city rides and very much satisfying of 65kmpl on highways. As I always try to maintain 45kmph when I’m low on fuel, I save 20% fuel by this method. Overall Mileage, though not best in its category, but is worth if you consider Stunner’s power and performance.

Few More Things about the Bike:

My Verdict: CBF Stunner is a perfect blend of Style, Performance & Economy. Though it’s the costliest in its category by few thousands, but is worth a buy because of its key features. Honda has done a brilliant job by introducing this international model in India. Finally if you are looking for a bike that has awesome looks and great Fuel Efficiency (in awesome looking bikes) and great power (in 125cc category) then this one is for you, But be aware that this is not powerful enough for die hard power craver’s. If you are on a budget like Rs.60k, and want a truly great looking high performance bike in 125cc category. New Honda CBF Stunner is a must buy as I enjoy the quality!