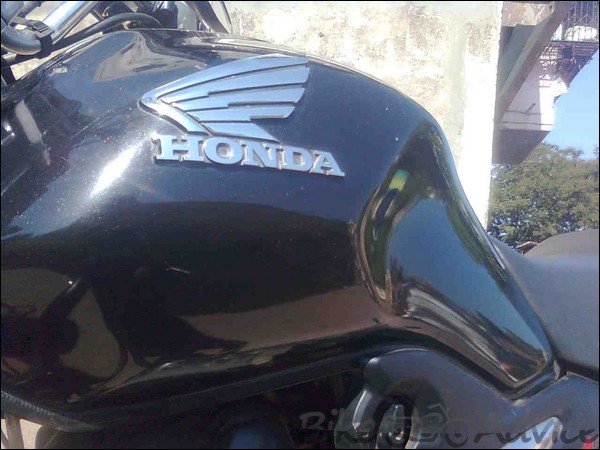 Thought of buying a bike: Since childhood | Actually convinced parents to buy a bike: January 2010 | Ordered the bike along with my best friend Darryl : 23 January 2010 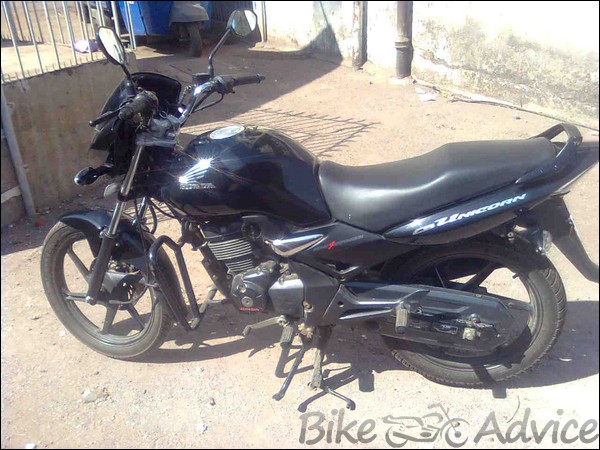 One of the main reasons I didn’t have much difficulty in selecting my bike was that I needed a tall bike because I am above 6 feet tall. GS150R, Shine and Unicorn were the only bikes I considered. GS150 was ruled out then because it hadn’t been established in the market yet and though I had read awesome reviews of it I was not convinced into risking my money into a Suzuki bike.

I may be wrong now but I guess Honda is a brand you can always trust and so I was caught up between Shine and Unicorn. Darryl was sure he wanted a Unicorn and I had decided shine because my dad didn’t want me to get a 150cc bike and plus it would be weird if me and darryl had same bikes also because we r together everywer n ppl think we r more then best friends. 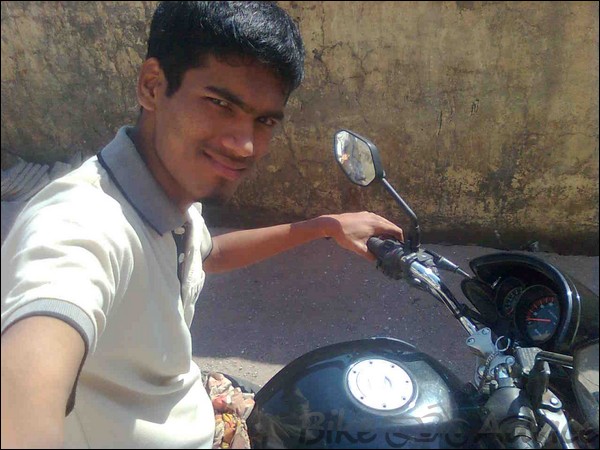 But when I went to a dealer with my dad that fellow convinced my dad to buy a Unicorn and I was more than happy. So we had 2 Unicorns coming our way and we were excited. Darryl and me had always been mistaken for each other and now that we were buying the same bike it would add to our woes.

The sad part being the 3 month waiting period. The wait began with Darryl counting down each day we met telling me Day 1, Day 2, Day3…. Day 15 and it was getting annoying because we used to see so many Unicorns on road and felt like “aye thats our bike but we cant ride it yet”.

The waiting period was really getting to us around a month later and to worsen things my dad gets a mail from Honda saying that the delivery has been delayed even further and we were left counting down once again. But then we were also sure that we’ve chosen the right bike because we had seen so many Unicorns on road. 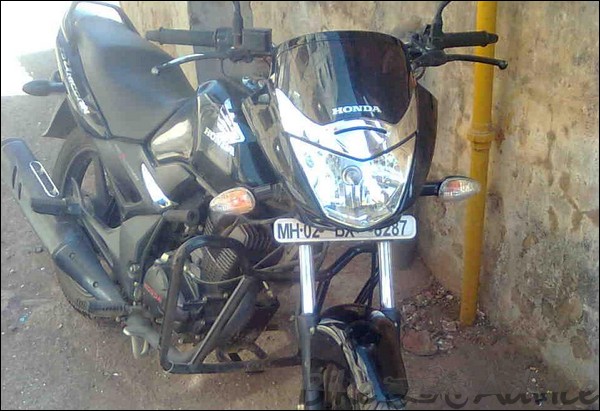 Somehow we managed to keep our minds diverted and got through the waiting period and when the bikes finally arrived, it was a feeling and moment to cherish. A blunder by the Honda team was the reason we didn’t get our bikes together. My bike was delivered on 7th April 2010 at the showroom so we both went there to take the delivery.

But his bike hadn’t arrived as yet. So we decided that i’ll also take my bike a day later. The next day was the same story. We go there and ask for his bike but his hadn’t reached yet from the workshop. But then the anxiety had gotten to me as well as him and we decided we at least take my bike and so I took my bike from the showroom on 8th April which is also the birthday of my chuddy buddy Parag.

So I was delighted and went to wish him in the night on my new CB Unicorn. Initially I was not pleased that the name had changed from Unicorn to CB Unicorn. But now it doesn’t bother me too much. Now coming to the bike of which this review is supposed to be. Well my Unicorn or our Unicorns haven’t been able to meet the expectations of a Unicorn mileage wise but this is an amazing bike which I guess u cant regret taking.
So lets start with My Opinion of the Unicorn.

Simple yet stylish is what I would call my Unicorn. The best part of my bike is the Honda logo. I also love the Shine and glow of the bike at night. You can easily spot a Unicorn in the night and also on road because there are so many of them. The Unicorn doesn’t lose its shine easily and even after 5 years I’ve seen Unicorns which look as good as mine (current 10 months old).

Comfort for the Rider and Pillion

Comfort for the rider is amazing especially for a tall person like me. I’ve never had any problem as such though I get back pains usually only when I ride after playing or a tiring day. For the pillion this bike is amazing as well because u are so high above the ground that u get a good view of things.

But this height for the pillion rider is a problem for my mother who is short cause climbing up to it is a problem and since i’ve removed my saree guard now she finds it even tougher because she doesn’t sit sideways. Also the height in the pillion seat is little scary because u get scared that the rider is getting the bike too close to vehicles. I’ve not felt this fear sitting on other bikes except stunner.

By performance I mean everything related to the engine. Mileage is the 1st and most important thing for me and I guess many people riding bikes. Initially the bike used to give a mileage of 45-47 during the 1st 6 months and later it used to give very irregular mileages ranging from 39 to 48 which has been my maximum riding purely on the highway.

The mileage of my bike has always been a complain for me because I’ve heard of many Unicorns giving a mileage of 55 even on city roads and though I ride through a lot of traffic I expected a mileage of around 48 at least because my friends RTR 180 gives him 45. And I barely cross 60 which means may be once in 15-20 days.

Pick up of the bike is decent. People say its much lesser than other 150cc bikes. I agree to an extent but you really cant make out that difference too much when you ride. Darryl’s Unicorn had a pick up lesser than mine but gives a mileage which is more than mine. So I feel the Unicorn is a balanced bike. You can choose pick up or mileage as in every bike.

The smoothness of this engine no one can or will ever deny. Such a smooth bike with the least of vibrations even at 100 is what makes this bike amazing, though this bike takes a lot of time to go from 80 to 100. So reaching 100 is not easy unless you really have a long stretch. I’ve reached a max of 97 I guess just once and Darryl has reached 105. So the bike is capable of top speeds but we are not the racer types and we barely cross 60 also. And below 60 this bike is a gem giving both awesome smoothness and a good pick up. Obviously regular servicing is necessary. I didn’t change my engine oil since 5 months and its started to vibrate a little and so had to change it immediately.

For me the gear box is awesome. I hardly have any problems switching gears while riding actually I don’t have problems while riding. Only few problems when I have to switch to neutral when I stop the bike. The bike kind off gets stuck on the 1st gear and doesn’t move up to neutral easily. But thats ok because I’m not moving anyways and it isn’t affecting me much.

The braking of this bike is amazing and apt for its power. So you’ll never find yourself banging into anyone if you apply the brakes properly. But you might get someone bang into you because others might not have as strong brakes as a Unicorn. A problem with the Unicorn on city roads is that the disk brake loses its alignment and the servicing of that is around Rs 275 which is not included in the free service part of the servicing. So disk alignment is a general problem with the Unicorn in city roads.

Well actually I cant much on this part of a bike but I guess the Unicorn is the most durable bike. Yes more than the 100 cc bikes also according to me because the maintenance issues are negligible. And I really don’t like the Honda service people. But frankly speaking I didn’t need them also too much because there haven’t been any problems as such except my disk alignment. Same is with my friend Darryl.

Comparing Unicorn with other 150 cc Bikes

I feel Unicorn is definitely much better may be because its more expensive or the other bike is just not good enough – Achiever, Discover 150, Hunk, CBZ Extreme, Pulsar 150 (weight, durability). And Fazer is too expensive according to me so its not worth. And so the competitors according to me are FZ, FZ-Sand GS 150 out of which I guess the GS is the best because of its price,design, 6 speed transmission and the mileage it offers despite being more powerful.

I personally don’t like the FZ’s and Fazer because I feel they really look bad (personal view) and also fibre body is something I would never want though I like their mono suspension and stability. But coming to the value for Money on my CB Unicorn I feel its not worth because I feel its overpriced for the features it offers and plus I haven’t mentioned the best 150 cc bike yet.

The best? It’s the CB Unicorn Dazzler. I wont go into details but yes the Dazzler is the best 150 cc bike according to me (I don’t count R15 for comparison here because that bike is beyond the comaprision of these 150 cc bikes and is beyond the price bracket also).

Dazzler’s pick up and mileage are both better than the Unicorn. Plus the disk brake is improved so that alignment doesn’t get disturbed even on city roads. All in all its a complete 150cc bike but some would argue thats its small which is a valid point.

Now that I’m done with the review part of it, I would like to mention why I love my bike so much. Many times I am upset and bored of life situations. Generally people would say go for a long ride but city traffic doesn’t let me do that during the day and riding through traffic would increase my frustration.

So when I am off mood I generally am awake till 1 or 2 in the night. So to relieve my tensions, all I do is take my Unicorn out and go for a ride on the streets of Mumbai and thats what I call heaven on earth. Silent me on a silent beast on a silent night.