Honda’s new entrant in the commuter segment the CB Twister has it all. Looks, mileage, power and so on. Yes, the mill churns out 9 bhp which is pretty decent for a bike in its segment. So,you name it and the bike has it. This 110 cc beauty deceives all for what it can deliver. A perfect blend of style and substance integrated that totally gels with the modern day commuter. Entering the Honda showroom, one can see the new CB Twister’s in various colors pleasing the eyes. 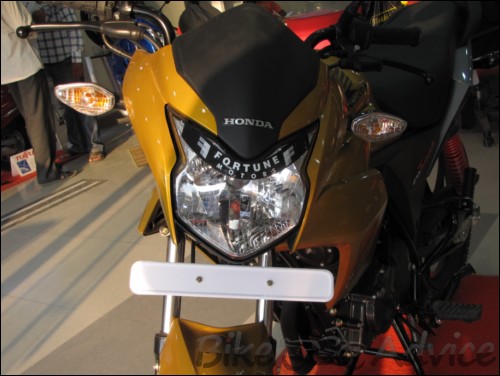 The test ride I took though it was not for more than a few kilometers was enough to know how smooth the bike was and get a hunch for what the bike can give to the rider. Nothing needs to be said about the smoothness of the engine as we all know that It’s a Honda!.

Power and Performance: The self start was exceptionally smooth. The Switch was vertically placed, unlike any other bike, which gives a new feel while starting the bike. The bike has a toe-shift gear pedal. The initial pull was pretty decent and comes close to the 125 cc shine or actually matches it. Even with the showroom guy sitting as the pillion, the bike took off effortlessly and could clear traffic with ease. The bike comes with a maintenance free battery so no more topping up of electrolyte. I could reach only a top speed of 65 km as the traffic was heavy at the time. But the bike can definitely give much more. The power delivery was smooth on all gears and no loss of throttle (usually experienced with Honda bikes). I realized that there was no pass light switch though when I was overtaking though. 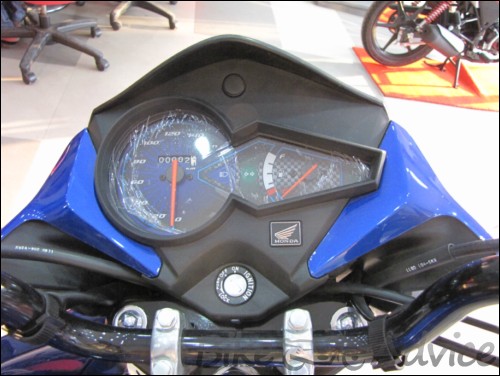 Handling: The tires were grippy enough and slicing through traffic was a breeze. Thanks to the handling department, they have done the commuter’s job well. Even on the bumpy road in front of the showroom, the bike was impressively smooth. Maybe even more than a unicorn. No offence to Unicorn guys though. In the limited time of the ride, I decided to test all the factors of the bike. The company claimed mass centralization was definitely at work. The front disc was a little sloppy than expected and did not perform well. Unnecessary for a bike with such less power and weight (just 108 kg kerb weight). Overall, the handling characteristics in traffic were pretty decent. 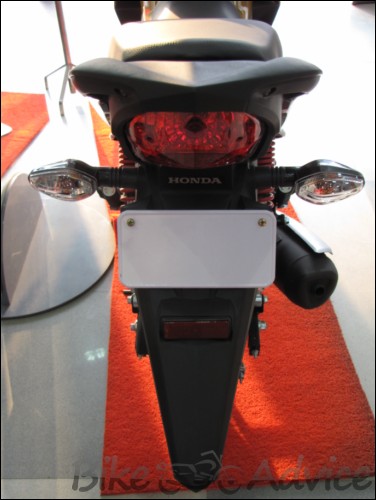 Looks: The pictures say it all. All black treated engine, alloys and central body makes the bike pretty handsome. A colorful instrument panel with a blue lit background show numbers upto 140 km/h. The screenless front cowl and so called floating side cowl add oodles of style quotient to the bike. The tank is muscular which gives the rider a feeling of riding a bigger bike. Honda has put in a half chain case on this one though which may be a drawback for Indian road conditions as the chain will need more frequent maintenance in terms of cleaning and lubing. The rear view mirrors have given a new design with more edge and feels the design is flawless. The short muffler adds good overall looks to the bike which is actually a pat of the mass centralization concept. 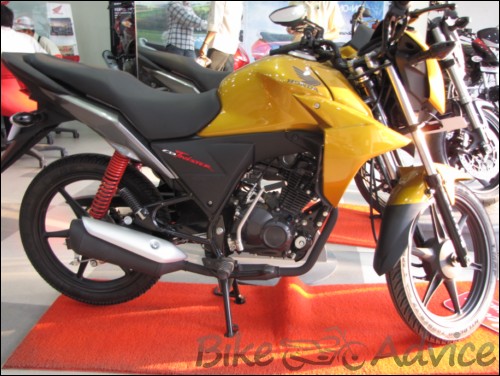 The Yellow and blue versions looked pretty decent and they are the ones we will be seeing in the roads soon. The bike comes in both self drum/disc and kick drum versions. On the whole, the bike adds value to the Indian commuter bike market and definitely is competition for all 100 and 125 cc bike in terms of looks, performance and value for money. A good buy for a mileage and looks conscious person. An easy-to-ride city bike with no flaws as of now, but again depends on individual needs. Happy riding.