After creating a lot of ruckus in the 125cc segment, Honda Motorcycle and Scooters India (HMSI) is all set to launch a brand new smaller capacity ‘Stunner’. The new bike would be christened as CB Twister and as the name infers it would be based on the similar platform. As a few of the spied pics suggest, this bike is made to distinguish itself from the already crowded 100cc market and draws its cues from the bigger CB series of bikes. The tank resembles a reworked Stunner’s, red shock absorbers are carried directly from Stunners, front headlight has been made fiery, the stylish dummy air scoops add to the aesthetics of the bike and the upswept side panels and a fantastically contoured seat compliments the overall blistering looks of the bike. The basic designing and parts of the bike have been inspired from bigger CB 1000R (aka Hornet), CB 300R, CBX 250 and CBF Stunner. 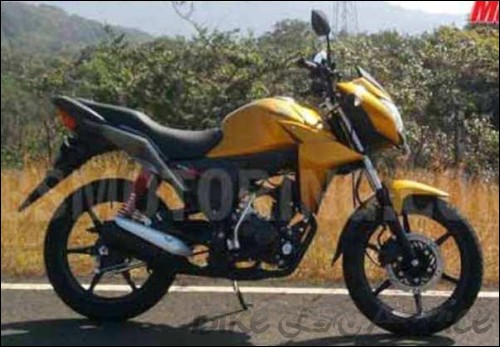 HMSI declared three years ago that they were working on an all-independent and an exclusively for-India lower capacity bike and seems like Honda has hit the right chord and what could be the best segment to do this than the segment which churns out the major portion of the whole market! HMSI sells Shine and Stunner in the 125cc segment and Unicorn in the 150cc segment.

This would be their first bike in the lurid 100cc segment and a lot of thinking has been done by the higher management so that the new bike does not cannibalize into their sister concern Hero Honda’s bread and butter segment where it rules by a huge margin. This bike would be positioned as a premium 100cc luring customers from starting 97ccs to 125 and 135ccs who want their bikes to look more stylish and are bored of seeing those umpteen 97ccs on the road!

The bike boasts of some pretty fantastic India’s first features and we expect the price to be on the higher side of 50ks. Disc brakes, six spoke alloys, small stylish exhaust, split grab rails, open sporty chain, trendy dummy air scoops, glossy colors etc form some of the features which would make this bike a hot favorite among the masses. HMSI plans to unveil this bike at the Auto Expo 2010 in Delhi and may soon follow up with the on road release. We are keeping our fingers crossed!