Seems like a festive season with manufacturers launching brand new fantastic bikes every now and then. Yesterday it was the countries second largest manufacturer, Bajaj Auto which unveiled their brand new 4 valve Pulsar, today it’s the turn of Honda Motors. HMSI (Honda Motorcycle and Scooters India) launched the much awaited CB Twister today with some astonishing features which are set sure to ensure people flocking their showrooms.

The new CB Twister is based on the same platform as the other biggies ala CB 1000R (aka Hornet), CB300R etc., though in a typical Indian commuter format. As reported earlier, the bike is powered by a 109cc motor (we are yet to ascertain if it is the same Activa/Aviator’s 109cc mill or a different one) which pumps out a maximum power output of a pretty decent 9 bhp @ 8k rpm and the peak torque output of 9Nm comes in at 6k rpm. 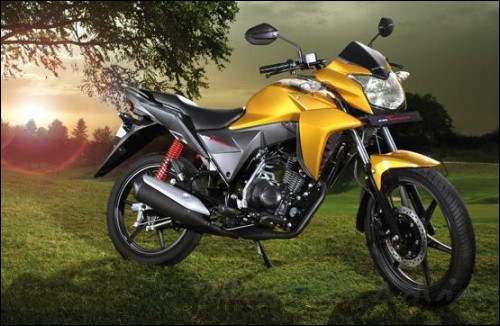 Added to the impressive stats is the lesser weight of the bike (108 kgs) which definitely would make this bike a treat to flip through our Indian roads with ease. Arent we missing something? Yes, for the plain jane mileage concious people Honda promises this bike to deliver fuel efficiency figures of 70 kmpl under real road conditions which are impressive by any standards. The bike comes with a 4 speed transmission box where we expected it to be a 5 speed one!

The front suspension does its job with telescopic hydraulics whereas the rear duty is performed by rectangular box swing arm type spring loaded hydraulics. Braking duties are performed by 240mm discs at the front and normal 110mm drums at the rear. With a light weight, we feel this bike would be a lovely mix of fun and control. Slowly Honda is also moving to 17 inch tyres. Specs for the front rubber are 70/100 17 and the rear does with fat 80/100 17 rubbers but the good news is that both the tyres are tubeless. Moving on to the instrumentation bit, the bike still does with the traditional analogue speedo meter and fuel gauge but the way they have been designed impressed us a lot. However, there is no tachometer still, along with the absence of gas charged shock absorbers, DC electricals and LED lamps which have become quite a norm on Indian bikes of late. 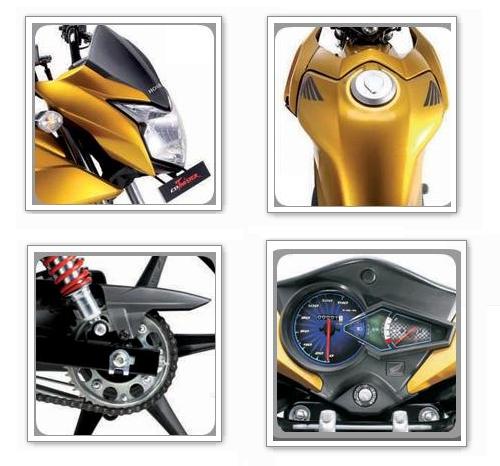 The bike also comes loaded with a sporty half chain cover in keeping with the latest trends but we feel that’s a little too much specially keepin in mind the cadre of people (commuter oriented) this bike would be bought by as maintaining an open chain is one of the biggest issues faced by the bigger bike owners these days. Viscous air filter (which has been made standard on most of the HMSI scooters) also ensures the engine gets dust free air and you get lesser pains to change the maintenance free air filter. Along with other features, we are mighty impressed by the huge 180mm ground clearance of the bike. Fuel tank capacity of the bike is a little low at 8 liters. A maintenance free 12 V 3 Ah battery is also provided with the bike.

Now we have two news left to share; one good and one bad. We will start with the good news first. The base variant would be yours for an on road (Delhi) price of close to 45-46ks (ex showroom Delhi is 42k) only which makes it a lovey package and a threat to some others lurking around the same price band. Bad news is that the bike would be available only after February 2010. Seems like the market is heating up with some sizzling beauties from all corners of the country. You keep glued to BikeAdvice as we bring more about the bike shortly!