The Honda Activa is an amazing bike. Ask anybody who owns it and they will vouch for it. Let me introduce you to this 2 wheeled marvel and show you why Honda is a master of their art of building 2 wheelers.

A Winner Among the Masses: Since its launch in 2001 the Honda Activa has become a hit with both men and women as it caters to the needs of both genders. Practical, comfortable, convenient, reliable, durable, maintenance and stress free, workhorse, family carrier etc… are some of the adjectives associated with the Activa. 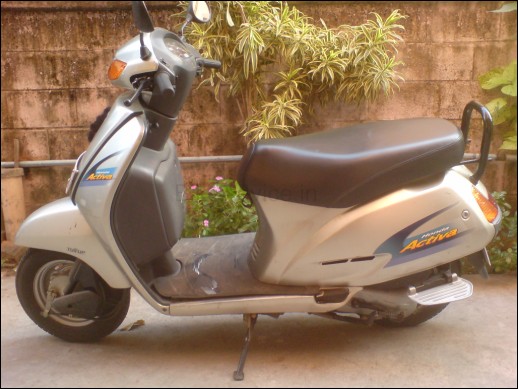 The Engine: The bike has a 102 cc engine with v-matic 4-speed transmission and 7 bhp of power. The only shortcoming is, the bike gives only 40 km/ltr in city and 45 on highway. I am sure this is a small price to pay as once you ride the bike and feel the refinement of the engine even at 70 km/hr you won’t mind about mileage at all.

Lots of Storage Space: The bike has plenty of storage space for little knick-knacks and for those trips to the market and grocery stores. You have an optional storage compartment box to fit beneath the handlebar for extra storage space. Beneath the seat you can keep your full-face helmet and save money, as you won’t need a helmet lock.

Wings of Change: Activa has a 6-liter fuel tank and has a range of 240 kms on highways before needing a refill. The bike has a metal body that is sturdy and because of this the bike weighs almost 110 kgs. The weight is an advantage to you as, cross winds won’t affect you when you are driving in city or highways and the bike is stable and steady on all kinds of roads. The suspension and the wide comfortable seat keep the rider and pillion isolated from the bumps and other irregularities. 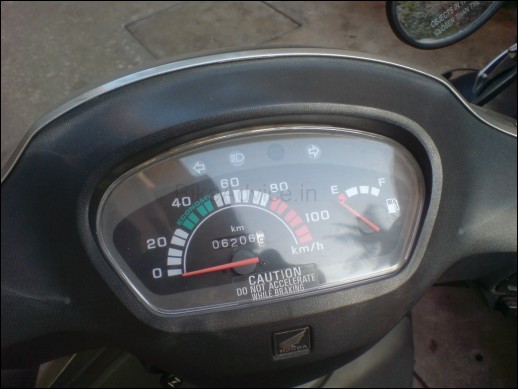 Have you got your Honda? The Activa is the best bike for those crowded rush hour traffic and nothing even comes close. You can out maneuver anything else with this bike and I think you should call it “traffic buster”. The bike is in my opinion the easiest 2 wheeler to drive. No gears, no clutch, self-start for easy starts. The bike has tuff-up tube tires on both wheels, which are puncture proof.  I feel the bike is even easier than a cycle as you have to just sit and twist the throttle and zip away. Remember in a cycle you have to pedal and it’s a pain while Honda Activa is a pleasure to drive.

Honda has always been a top automobile company and their products are the best. Just take a look around you and you will realize that some of the best bikes in India are from Honda. Unicorn, CBZ Xtreme, Hunk, Activa, Splendour, Passion, Dio, Shine, the old CBZ, CBF Stunner, Pleasure etc. to name a few.

If you guys can remember some time back you will realize the gearless scooter which made Kinetic Famous was also a Honda under the skin. Later we had the 4s edition which was also courtesy of Honda.

You see even Pleasure is also a Honda underneath. What I am trying to tell you is that Honda tech is the one of the best in the world why else do you think companies like Kinetic and Hero had collaborations with Honda.

So obviously when Honda releases a product it will be truly world class. Honda entered the Indian market with the active and soon the bike became a hit. Honda established itself in India as a major 2 wheeler force. Later we had Dio, Unicorn, Shine and now Stunner.