Hero Motocorp. country’s largest two wheeler manufacturer is yet to prove itself in 125-250cc segment. The company is losing market share in 125cc & above segment on continuous basis. The company has sold 23,860 units in the month of November 2011 compared to 34,116 units sold in the month of January 2011 in the domestic market which reflects de growth of 30%. Notably that company has products like CBZ extreme, Achiever, Hunk, Karizma and now the company has added Impulse to this segment. Despite having five brands the company is not able to compete with its competitors in this segment. 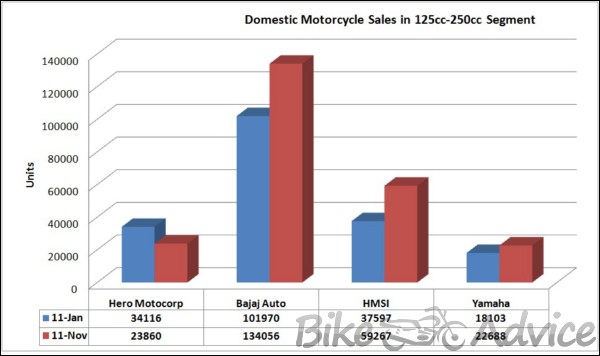 In fact competition is doing much better than Hero Moto corp. Bajaj Auto sold 1,34,506 units in November 2011 compared to 1,01,970 units sold in January 2011 in the domestic market which reflects growth of 31.90%. This is on the back of strong sales of Pulsar series, Discover 125, 150cc, Avenger and recently launched Boxer 150cc. HMSI (Honda Motorcycle and Scooters India Ltd) and Yamaha (India Yamaha Motors ltd) has sold 59,267 and 22,688 units compared to 37,597 and 18,120 units sold in the month of January 2011 respectively which reflects growth of 57.64% and 25.33%. HMSI has strong product like Honda Shine, Stunner, Unicorn, Unicorn Dazzler, Honda CBR250R in this segment. Yamaha’s growth story is attributed to strong sales of SZ and FZ series it also has Fazer and R15 in this segment.

The reasons, why Hero Motocorp is losing market share in 125cc & above segment are, strong competition, poor brand recall in 125cc & above segment and focus on rural sales. Rural sales account for nearly 45-50% of total sales, which is 20-30% in case of competition. But this is the single reason why the company is still market leader and outperforming in 75-125cc segment. It has sold more than 4,60,000 units domestically in the month of November 2011 in this segment which is, much above than competition. In fact the total of all competitors cannot make half of Hero Motocorp’s sales in this segment.  For example, Bajaj Auto sold 94,343 units and HMSI sold 12,478 units domestically in November 2011 in this segment. Hero Motocorp is riding high in this segment because of strong brand recall of splendor, passion and CD 100 which has strong presence in rural segment.

With the launch of Hero Impulse, Hero Motocrp wants to strengthen its position in 125cc & above segment. However, the competition is preparing to launch new products in 75-125cc and 125-250cc segment. Bajaj Auto is going to launch new Pulsar and KTM Duke in 125-250cc segment while HMSI is preparing to launch two new motorcycles with one 100cc motorcycle which will directly compete with Splendor. 2012 will be the year which will see strong consolidation as far as market share is concerned.