First things first. This is not a bike’s review. It’s much more than just a review. It’s a love story. A love story which started almost 1 year back when I first saw the shiny new pearl white Karizma ZMR at the Hero Honda showroom. Call it love at first sight or whatever, I simply lost my heart to it and that very moment decided to have it in my garage. 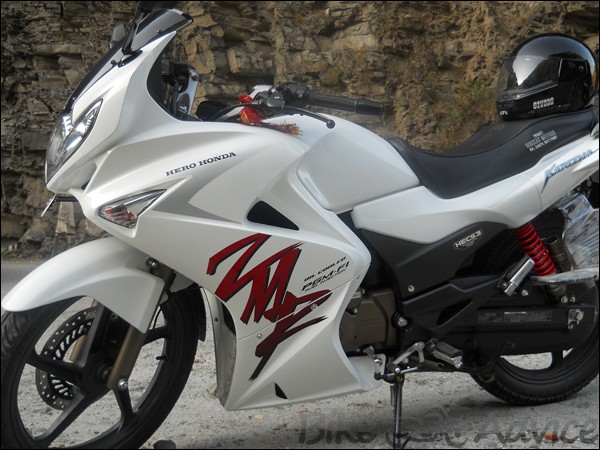 The sparkling headlamp, shiny fairing, all new digital console was just too much for me. But the hefty price being the only rider in my owning it because it was way too costly for my Dad’s liking to finance it. Simply had no other option but to save myself to be able to have it. It took 6 months of “kanjusi” in all other matters that finally I was having sufficient funds to get my “sweetheart” finally with me.

The day I had 1.2 lakhs in my special account, just told dad that I am going to get the bike of my dreams and raced as fast as I could to reach the Hero Honda Showroom, only to be shocked to listen that all ZMR”s except white one were having waiting period of 28 days and the white beauty being most special with a waiting of 45 days.

Returned empty handed & then the search began for the Hero Honda dealer who could unite me with my sweety at the earliest. Only to be rebuffed every where with a waiting period ranging from 29 days to even 60 days. Then started the black period of shradh during which there are almost negligible sales of vehicles in India.

But again same reply 2 months waiting. Since somewhere Indian mind worked and I refused to book bike in the shradh period and wait for the Navratras which immediately follow Shradh which in turn proved to be a blessing later.

Finally, Navratras started and as is the usual procedure, after finalizing an auspicious date i.e. on the 1st Navratra on 8th of October I was ready to book my Karizma ZMR Hoping the delivery any time between January first week. I still remember the name of the salesperson that unites me with my sweetheart. When I entered the showroom the person named S pathak was the first one to confront me. 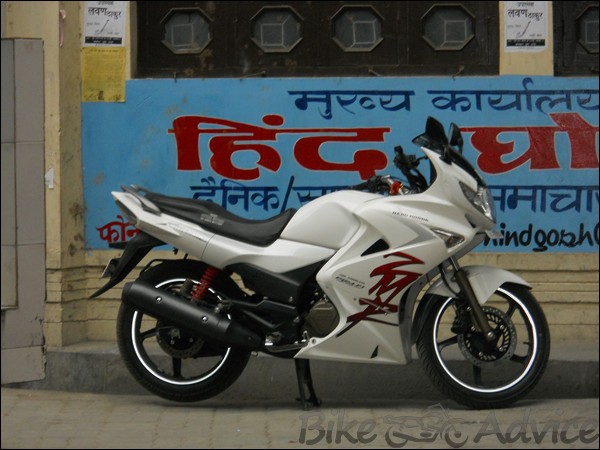 I told that I was there to book a white ZMR the first thing he asked was, whether I was buying on full cash payment or financing. When I replied that I was buying on cash. He immediately threw the next question, when I wanted to take delivery. It was a sort of a pleasant shock for me. Here was I expecting delivery after 2 months and this person is asking me when I want delivery.

Because it was 7 pm already I simply replied that if it’s available I can take delivery the very next day. He asked me to wait in the customer’s lounge while he disappeared into the Showroom owner’s cabin. There was a ZMR parked at the display. I was just wondering when I’ll be able to own one. I was busy admiring the ZMR when all of sudden Mr Pathak cropped up from nowhere & gave the most special news of my life.

I still remember his words. He said, congratulations Dr Manish, you are the proud owner of this white ZMR & we’ll be extremely pleased to deliver it to you tomorrow morning. Boy, my face was telling everything. Here was I to book the ZMR and this guy is telling me that its mine. I just plonked 50000 Rs & voila.

That very moment an attendant placed a SOLD placard with my name written on it. Subsequent enquiries revealed that expecting heavy sales in navratras, Hero Honda had dispatched 1 extra Karizma ZMR and I was the proud owner of that one. With in minutes of the attendant placing Sold card. Another bloke entered the showroom for booking ZMR, It just came out from my mouth instantly. Sorry mate. You are late.

I swear, I dint got sleep even for 1 min entire night and it seemed to be the longest night of my entire life. Morning itself I got up at 4:30 and washed entire garage for welcoming the princess of my dreams to my house. I still can recall, dad shouted from his room “ye ladka pagal ho gaya hai” Indeed I had turned mad.

So, as scheduled I was at showroom sharp 9:30. I couldn’t even wait for mom to make breakfast and ran empty stomach to Showroom only to find that not a single staff had arrived yet and sweepers were cleaning the showroom. Somehow time shifted to 10:15 and finally Mr Pathak too arrived. Sensing my eagerness he asked me smilingly, raat soye bhi ki nahi??

And then the special moment. Mr Pathak asked an attendant to get the White ZMR ready for delivery. The White ZMR removed from the pedestal and whisked into the workshop to be readied. I could not control myself and followed the attendant sheepishly. Nut by nut. Mirror by mirror. My princess was being readied for me. I was getting a feeling as if; my bride is being readied for me, just for me.

After an agonizing wait of almost an hour the mechanic connected the battery, filled the oils petrol etc. The moment he turned the key on & the bright shiny orange display came to life, with the Tachometer going to full, my heart beat had already raced to 100 plus. Then came the most special moment. The Mechanic pushed the ignition key, and god.

I am a dead man. The sweet exhaust note was just as an orgasm for me. Immediately only one thing came to my mind. This bike might have moved from factory at least 20 days back with all battery disconnected and this bike roars to life with the first push of starter. Great . No Irregular exhaust note, just smooth 225cc motor whizzing.

I was loving it. Finally after all billing and inspections the Karizma ZMR was finally mine. & boy, the looks and gazes it got when I was on way back home, Itna shayad 25years me nahi dekha hoga logon ne mujhe. That was on 9-10-2010 , 12:45Pm the moment ZMR entered my Garage. Entire afternoon and evening I just kept going to garage just to see my princes, who was finally mine.

Before I write the review, just want to say one thing. This is a review of ZMR and I will be saying only about it rather than comparing it with anything else. Because it’s the bike I own so obviously I am going to like it more than anything else.

There is no doubt in it that ZMR is striking in design and style. I don’t remember I single moment when it dint gathered attention. The striking headlamp, full body fairing with ZMR written in red, all new fully digital console is something which is one among the best in India if not the best in India. 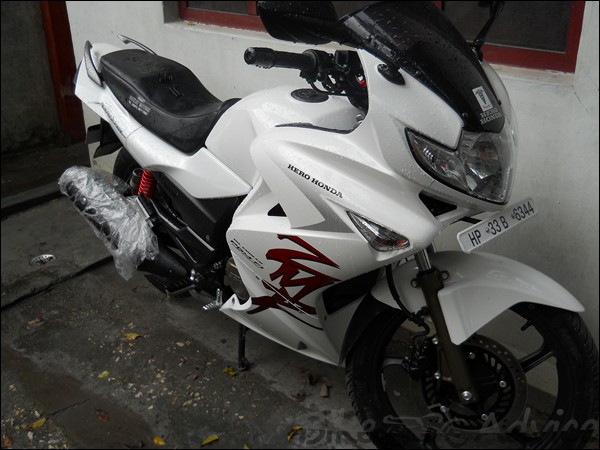 The bike looks good in every possible angle with the rear being the only weak link. The LED tail lamp is good but could have been better. The front fairing lends the bike a heavy look but definitely it’s not as heavy as it looks. There are air scoops in right places which give the bike a unique look.

The bulky front fairing does has a tendency to vibrate if nuts holding it in place become loose but that’s not a major problem. The handle bars with meaty bar ends look good but the bar ends could have been smaller rather than so long in length. There is no doubt that it looks best in white followed by black, red, blue while yellow being the least striking. Overall, 4 marks out of 5 for design and style.

ZMR has a the engine of old Karizma but with fuel injection and oil cooler the engine sounds much better and most importantly gives better drivability and much better fuel economy. The best part is that fuel injection eradicates need for choke and other fussy things in cold starts. I live in Himachal and temp usually does gets to freezing ones in winter. 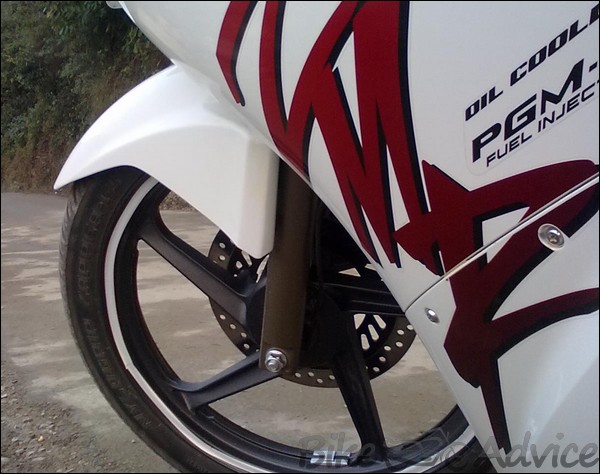 Not even once in these 4 months the bike refused to start in 1st go. Whatever be the climate, just switch on ignition, let the orange light go off, push the self starter, and bike roars to life in 1st go. No rough idling nothing. Just warm it up for few secs and you are ready to go. Now the gearbox. Which should have been upgraded to 6 speed one.

But it still gets the old 5 speed box which is good but could have been better. There are plenty of electronic sensors working every time which make riding a smooth experience. There are very few instances of finding false neutrals in between and overall rating in this section will be again a 4 out of 5. The engine power too could have been increased a bit.

When you 1st hop on the ZMR the bulky fairing does causes few concerns but once you start riding, and get used to it, Karizma ZMR becomes your own extension and does not puts a foot wrong. The handling is a bit wobbly due to smaller tires but it’s sufficient if you keep our driving environment of bumper to bumper traffic. 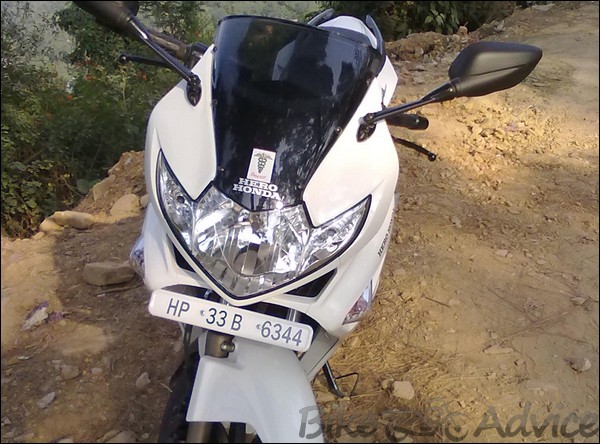 In heavy traffic it does takes a bit of effort but still it has got sufficient moolah to keep going ahead. Even if engine starts pumping out 1000 bhp, people will still say, power is less. So need not worry. ZMR is sufficiently powered and geared and won’t let you down ever. Handling could have been better with a wider tyre set. Overall rating? 3.5 Out of 5. why? Because a fuel injected ZMR should yield more power than a carburetor Karizma.

With prices of petrol going up every 15 days, ZMR is surely gonna save you a lot of money at petrol pumps. I live in a hilly state where the terrain is full of inclines going up or down every now and then. The ZMR is presently giving me fuel economy of 38 to 42 in city and around 43 to 45 on highways and mind you. Just 2 services over yet and I do expect it to rise once parts settle up in engine.

People say ZMR is too costly; one could buy a nano in its price but How to wean away a love? Biker will always be a biker and not a nano driver. It is costly? I don’t think. See. ZMR is around 25000 expensive than normal Karizma. The front fairing complete costs around 8000,tubeless tires roughly 2000 more, fuel injection plus all electronics – 7000, digital console- 2000.

Rear Disc – 3000 So if you roughly sum it up, the excess money is in the bike itself. And you do get a best looking bike in country. Service can not be done anywhere due to fuel injection so it is a bit of problem. It is a pain to keep white clean and needs frequent washing but all is worth it.

As my fiancée says, Karizma ZMR is her competition My & ZMR relation is just 4 months old yet and the honeymoon is yet to get over.