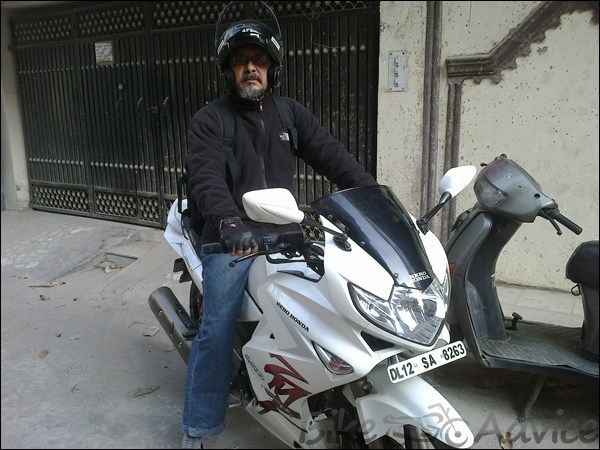 Hi, My name is Ronald Rowe, I am 60 years old and originally hale from Calcutta, now called Kolkata. I work in a company that deals in water treatment plants and I do a lot of traveling in my course of work. I love going by road and most of my travels are on my trusted stead even if it is 400km from my home base.

I still remember the first bike I flipped over. I must have been about 9 or 10 years old then. It was a Velocettet 200cc. bike with a 4 stroke water cooled engine. It had a rectangular tank, Hand start and hand gears. Wish I had that bike now to show off with. I cut my eye teeth (read, learned to ride) on an Enfield England 350cc original bike and fell in love with it. Never bought an Enfield bike, for obvious reasons. (Read as old outdated technology). Now fast forward to the present.

Why I Choose This Bike

30 Nov. 2011, was the most joyous day of my life because I got my first bike of my choice in my own name. Why I say this is because all this while, I have been using hand-me-down bikes. Right from an original Enfield England to Lambretta to Rajdoot to Yezdi to Splendor to Kawasaki Caliber to Achiever and finally to the all majestic Karizma ZMR, (Read as ZEE M R, It Sounds So Much Better). 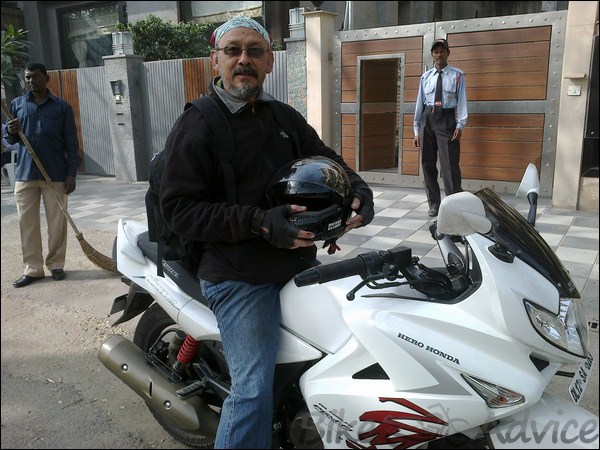 I decide on this bike after reading the reviews on Bike Advice Ownership Reviews. In spite of the cost, what went in favor of this bike was that all riders preferred this bike for Long Distance Riding and I consider myself a long distance rider rather than a racer. I did read somewhere that this bike was catering for the younger generation. That is a load of BS.

There is no such thing as a bike or scooter for the ladies or for gents or for the young or old exclusively. It is a question of ones choice, plane and simple. Thus far I have no problems with the running of the bike. On the contrary, I find it smooth, quick to respond to sudden acceleration, not that I need it, but sometimes, just to showoff to other bikers what the bike can do.

Cutting corners is a cake walk and though the rear disc brakes are not all that great, they are more than adequate to stop when used in conjunction with the front brakes, when needed, for the kind of riding I do which is mostly to cruising rather than racing and zipping around the city. I ride for the share pleasure & joy of riding and to enjoy that feeling of something hot and throbbing between the legs. (No Pun Intended)

Since Dec. 2011, I have covered approx. 5500km with a mileage of about 40km/lt. It is had to tell because, like all conventional bikes, this bike does not have a petrol tap and if you are not paying attention to the fuel gauge, you are likely to run your tank dry. This is hic-up # 1. 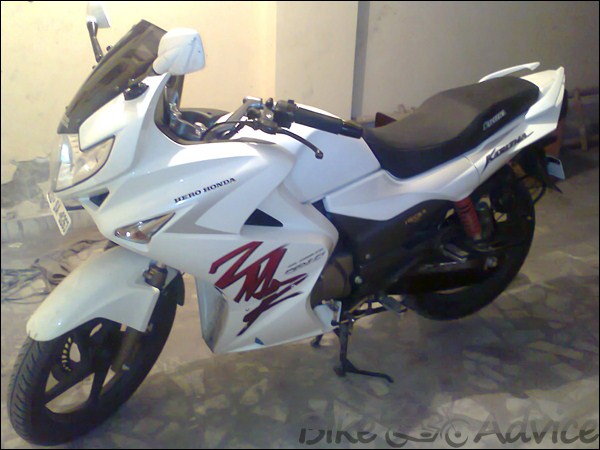 One other problem with the bike is that the gear is still a little stiff, especially when I come to a standstill and am trying to shift into neutral. Of course, it is much better now then when I first got it. I literally had to wrestle with the gears then. I have just had the third servicing and the gears are much smoother and a pleasure to ride.

The things I would like to implement in the ZMR are minor to say the least but it would go a long way to improve the safety of the rider. The first would be to put a switch for the side stand. If by chance you forget to lift the side stand, the bike will start without a hitch but the minute you switch into gear, she will shut off and not start until the side stand is lifted. 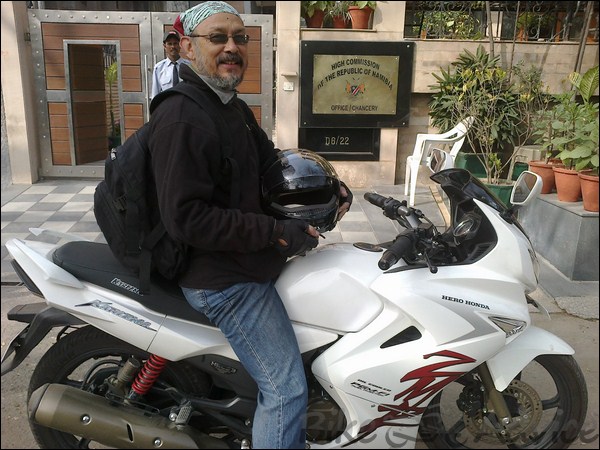 Come to think of it, this switch should be mandatory for all bikes. Most Japanese bikes have this switch as I discovered while in Kathmandu, Nepal and had the opportunity to ride a Suzuki. It has a small micro switch at the bottom and the side stand opens the circuit when the side stand is lifted.

Any vehicle that has disc brakes should have Anti-lock Braking System (ABS), and for two wheelers, all the more necessary, to prevent skidding, sliding and fish tailing when the brakes are applied with full force. Other changes that could be implemented are to use a shaft drive rather than a chain drive as used in some BMWs that I’ve seen. 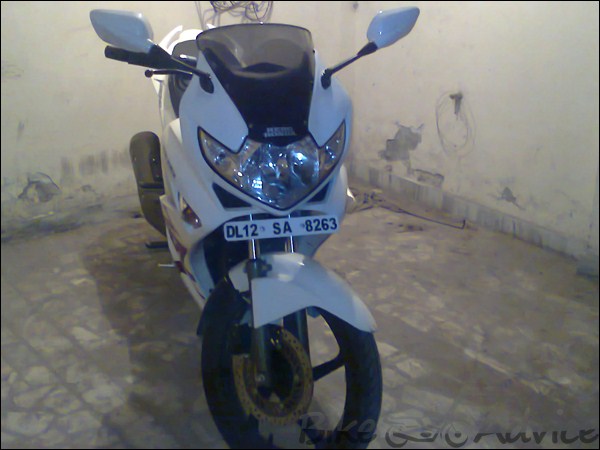 Apart from constantly checking that the tension is correct and changing the chain & sprocket kit when it is worn out, it could be dangerous if, God forbid, the chain snaps for what ever reason, it will lock your rear wheel. You can well imagine the consequences of just such an outcome. With a shaft drive, there is no need to check the tension, greasing or changing of chain & sprocket and such.

At the most, you would need to change the bearings in the four way knuckle joints. But then, this is my opinion and others may have other ideas better than mine. Even the belt drive used in the Harley’s, are not bad. One more thing I would like to share with all bikers or, if there is any one who has any idea about use of Nitrogen in your tires rather than conventional compressed air. I filled my tires with Nitrogen on Nov. 30 2010 and, till date the tire pressure is still intact.

My Favorate Bike Before This

Among the bikes that I enjoyed riding the most is the Achiever. I clocked about 90,000km in a matter of 3 & half years. The Achiever was a slim & sleek bike, good pickup, smooth and almost soundless. Often times, at a red light, I would wonder if the bike has stalled, it was so silent. I never had any problems with the running of the bike, or to be more precise, nothing worth mentioning. 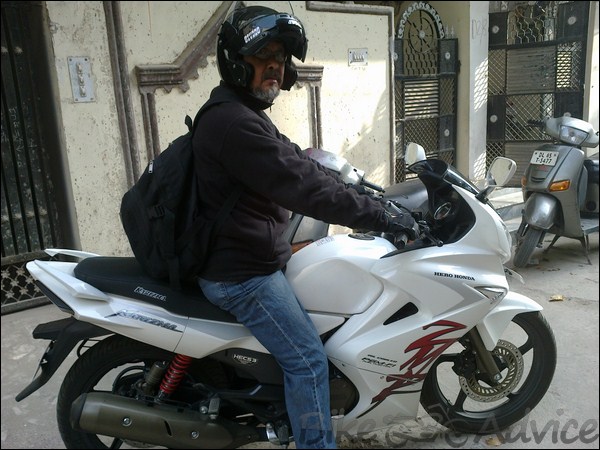 It is a pity that Hero discontinued production of the Achiever. It was a bike worthy of giving the Pulsar 150 a run for its money. I had done a lot of long distance riding on this bike and never had any complaint about fatigue or anything about the bike. Doing 100km/hr was a breeze without any vibrations and continuous for long runs. I remember doing more that a 1000km in three days. It truly was fun. Did I mention that the roads were not all that good on this run, well, they weren’t.

In the three months that I’ve used the ZEE MR (as I prefer to call it) is a worthy bike thus far but, as you have rightly said, no bike or machine is perfect and there is still room for improvement as I’ve mentioned earlier. 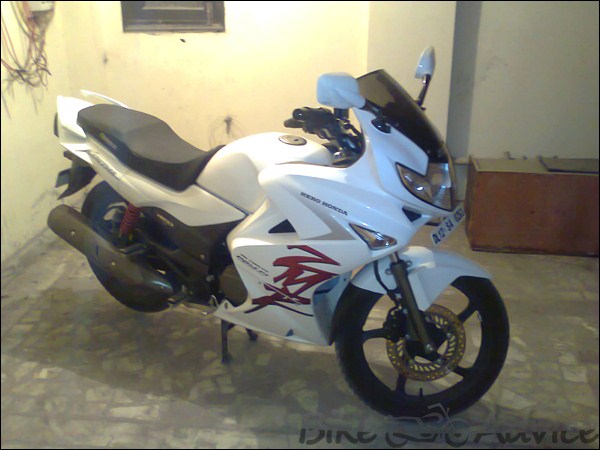 Well, before I sign off let me just add, and I shall borrow a phrase used by the Bollywood actor John Abraham, My Helmet Is My Baby and it is my life line. So, be sure to use your Helmet at all times and use it because you want to use it and not because you have to use it. I have been using helmets for the past 40 odd years from the time I learned to ride and they were not even compulsory at that time.

Let me sign out by giving you the message I always get when I switch on my Karizma Zee Mr, Hi, Welcome On Aboard The Karizma Zee Mr, Fasten Your Helmet And Fly Safe. Bon Voyage.