Hi everybody, I’m Rajesh from Vijayawada. I’m an engineering student from KL University, Vijayawada. Recently I have crossed the 25000kms on my odometer of my bike. So, I wanted to share my ownership experience of my bike. My bike is none other than a superior touring bike, the Hero Honda karizma. 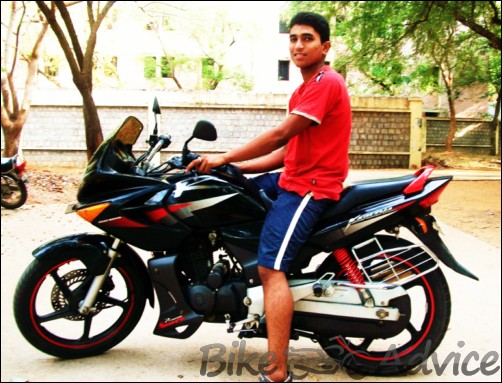 Let me tell you the story that made me choose the Karizma as my street weapon. Since childhood I’m an avid fan of sports cars and bikes, so as the time came for me to choose a bike I went straight ahead for the karizma with no other 2nd thought. Below is a small review of my Karizma:

Styling: Hero Honda karizma comes with a semi fairing at the front which is first in an Indian bike, later copied to Bajaj Pulsar 220, Honda Stunner and more. Though the engine is not completely covered it has a sporty cowl added for both safety of the engine and good looks. The bike has big and striking dimensions and can accommodate 2 people in sheer comfort. Unlike the Yamaha R15 and TVS Apache that provide cramped seating position for hefty and stout people, Karizma wins my heart in comfortable position for riding. 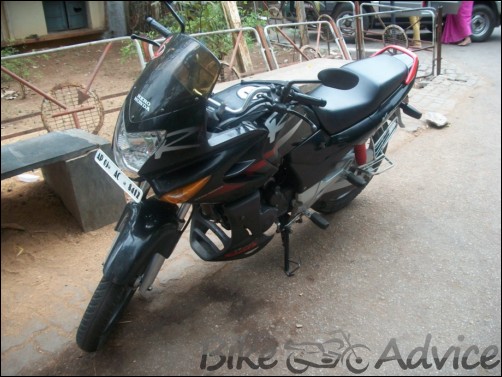 The toe-shift gear lever, larger front disk, multi-reflector rear lights, high seating and a bigger- gold colored silencer are a standard. The bike comes with leech like MRF zappers, the rear section is a 100/90 while the front is 2.75mm, while both are 18 inch alloy wheels. Though the switch gear lacks an engine kill switch and back lit function but still the quality over shadows these. The Speedo meter cluster consists of 3 dials, of the two analog meters, one is for rpm counts and the other for indicative speed, the third is multi function digital display that shows time, trip, fuel and odo meter readings.

Engine: The engine of Hero Honda is a 223cc long stroked engine which is highest in engine cubic capacity for an Indian made motorcycle. Though unable to produce 21ps like the competitor Bajaj Pulsar 220 for about the same capacity, it produces a decent 17ps and a torque of 18.5Nm @ 6000 rpm what’s important is that it’s backed by bullet-proof reliability of a typical Hero Honda engine. What ever be the kind of manners you show it, the bike retains its character of being niche to u. As the engine is air-cooled, it requires stops for every 100-150kms on the highways. One needn’t work hard to keep it in its power band, the bikes needle shoots up all the way up to 8000-8500rpm easily.

Performance: The bike takes you to 60kmph in about 4.5 secs and hits 100kmph in 13 secs. It’s a mean machine with both sporting and touring characteristics in its gene’s. The top speed a little over 125kmph and leaving behind the little vibrations near the foot pegs, the bike remains composed at high speeds. It easily reaches to 70-80kmph and you won’t even notice that until u look at the Speedo. 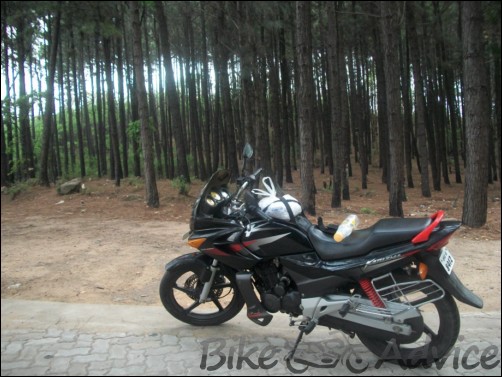 Almost everyone must have heard from tourers of India, that karizma is the best touring bike in India! I have also read an article about 2 people who have traveled from kanyakumari to kashmir on a karizma in about 2 days! This feat holds the shortest time taken to cover that distance. Economy: My karizma returns about 30kmpl in city and about 33-35 on the highways. Since my college is on the highway, I some times get 35-37kmpl at speeds of 80-100kmph!!

Comparison: Now time to show how this bikes fares over rest,

Yamaha R15: It’s the proper put-down sports bike in India, but costs more than a lac, no fun below 60kmph, small bike and very thin tires.

Hero Honda CBZ: The bike has good performance and economy but nothing fun or new on this bike, lacks flair and very boring style.

Honda Unicorn: Good city bike with Honda badge but not best in the lot. Severely lacks in performance.

Final Verdict: karizma with the badge of Hero Honda, touring n sporting gene’s and out of the world looks make it the ultimate winner. You get the best deal for your bucks. This is a real rev-hard bike with good gizmos in a stunning package.

Honda Unicorn: Good city bike with Honda badge but not best in the lot. Severely lacks in performance.