The news about Honda to sell its 26% stake in Hero Honda has become talk of the town in Indian two wheeler industries. According to sources close to this deal said that Munjal family led by Brijmohanlal Munjal will buy the 26% stake from Honda. The news, broken first by ET newspaper’s business channel. As per current market valuation Honda’s 26% stake is valued at over Rs.9,000 Crores. Hero Honda joint venture was formed in 1984 between Indian Hero group and Japanese Honda. It is one of the most successful joint venture in the world.

According to sources there are series of off market transactions will take place to buy the stake. Munjal family has formed SPV (Special Purpose vehicle) to buy the stake. They will first buy the stake through SPV and later on pledge this share to the bank to avail finance. The private equity option is also there. Honda will sell its stake at discounted price than current price.

The management of both the companies, though, strongly denied it. A Honda Motors spokesman told Bloomberg News that the company had no plans to sell. A statement issued by the Hero group on Tuesday after reports first surfaced of a possible Honda Motor exit surfaced, said, “The news report is incorrect and speculative. We have already conveyed that the Hero group and Honda Motor have for years enjoyed very cordial and fruitful relations, and there has been no change in the relationship in any manner.” 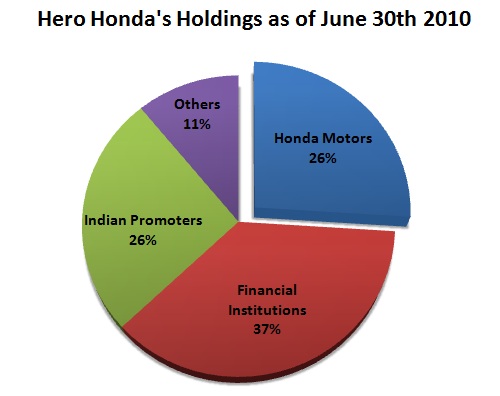 There are lots of differences prevail between Hero and Honda regarding royalty and spare parts. Honda wants to increase royalty from the sales while Hero does not want to increase royalty as majority of sales coming from old model splendor and passion. Honda also forcing Hero to source spare parts from HMSI (Honda Motor Scooters & India), while hero group does not want to do that due to its well developed vendor base.

Apart from this the fact can’t be denied that HMSI has very negligible presence in motorcycle segment. It wants to increase its market share in India but due to joint venture with Hero Honda it is not able to do it aggressively. India is second fastest growing automobile market in the world. Currently Hero Honda has more than 50% market share in Indian Domestic motorcycle industry.

In 1985 kinetic tied up with Honda to form Kinetic Honda Motors ltd. with both the partners holding an equal stake of 28.56%. The joint venture was running successfully till 1997. The actual problem started in 1998 when Kinetic Honda reported loss of 6 crore rs in the first quarter of 1998. There were lots differences were prevailing between Hondas and kinetic over issues like introduction of new models, advertising expenditure, marketing strategies, etc. Eventually Honda decided to close the matter and called kinetic officials to Japan in December 1998. Honda made an offer to Kinetic- either they will buy their 51% stake or Honda would buy out its 19% stake.

Meanwhile the rumor was prevailing about Honda to divest its stake in Kinetic. Both Honda and Kinetic were quick to deny rumors of a split, though reports of Kinetic quietly raising resources to buy out Honda’s stake kept surfacing. In the same month Kinetic bought Honda’s stake at Rs 45 per share half of the market price at a total cost of Rs. 35 crore. Kinetic also signed an agreement with them for continuing to manufacture and sell the existing Kinetic Honda models. Honda also agreed to continue providing technical know-how in return of royalty and technical fees from Kinetic.

After this deal Kinetic Honda was renamed as Kinetic motors ltd. Kinetic knows that if it has to survive without Honda, Dealer base and new product would be the key. Kinetic also started to manufacturer motorcycles but eventually, Kinetic was failed to survive in the competitive market. Later on the scooter business was sold to Mahindra group. It’s now known as Mahindra two wheelers.

After stake sale in August 1999, Honda established its wholly-owned subsidiary HMSI (Honda Motor Scooter India Ltd.) in India with an initial capacity of one lakh units per year. Today it has 48% market share of scooter market in India. It’s aiming to sell 1.6 million units in current fiscal year 2010-11.

Suzuki entered India through the TVS Suzuki joint venture, originally incorporated as Indian Motorcycles Pvt. Ltd in 1982. In the 90’s when competition was intensifying in Indian motorcycle market TVS approached Suzuki for more funds and technical support. Instead of providing more technical support and funds Suzuki started creating road blocks in the management. Finally, in September 2001, TVS group and Suzuki Motor Corporation announced their break up. TVS bought the 25.97% stake of Suzuki for Rs. 9 crore increasing its stake to 58.43%. TVS also ended the technical license agreement with Suzuki Motor before the maturity date. The move benefitted in terms of royalty payment to Suzuki as it has 30,000 booking orders for its bike TVS Victor.

Post stake sale TVS Suzuki was renamed as TVS motors Company. The company started focusing on Research & development as its key to survive in the business. TVS Motor won the Deming Application prize in 2002, becoming the first and only Indian two-wheeler company to win the award given to companies that do outstanding work in the field of Quality Management. It is considered to be one of the world’s most prestigious quality awards Today it’s able to produce bike like Apache and scooter like Wego.
On the other hand according to mandatory lock in period of three years Suzuki Motor Corporation was not able to enter into Indian two wheeler segment till 2005. In 2006 Suzuki Motorcycle Indian Ltd was established. The company is rapidly expanding in Indian two wheeler market.

Coming back to Hero Honda what could be scenario if Hero will buy the stake from Honda?

As still nothing has been confirmed officially by any company let’s wait and watch.