I purchased the new Hero Honda Hunk a few days back. There were two new colours blazing red and bold brown launched with the new model but none of them was easily available. Though I booked the bike a week before (I purchased it in the peak Diwali season), the dealer refused to book the bike color. 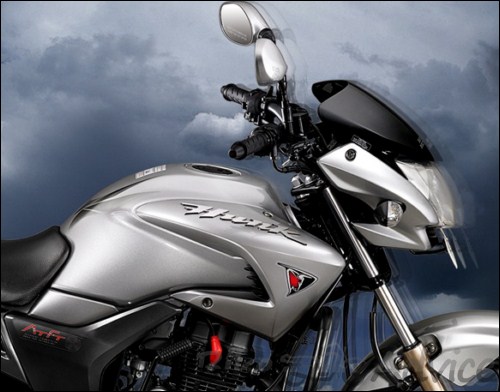 The dealers say that company randomly sends colors to them, so they cannot commit that a particular color would be available. I cannot understand why Hero Honda does that. When I went to take the delivery of the bike only black and sporty red (both are old colors) were available. Also the double disk brake model was not available. I hate black color so I had to be content with the red one.

The looks of the bike have not changed much from the earlier model and unless one looks carefully one is not able to distinguish between the new model and the old one. The most easily distinguishable features are the digital meter console of the new hunk and the absence of kick in the new model (Yes!! there is no kick in the new hunk. Again this is a new trend or say cost-cutting step to survive in stiff competition nowadays in many bikes including pulsar 180!!). There is one more difference which is hard to notice. It is the new led tail light.

The digital console is semi-digital and semi analogue type. The speedometer and odometer is digital whereas the tacho and fuel gauge is analogue one. HH has also provided a digital clock which is handy and useful and I must say this is an intelligent step from HH. There is one trip meter with 0.1 km precision and odo with 1 km precision. The back-lit console (with amber light) looks great and one would instantly fall in love with it.

The absence of kick can be considered a bit of drawback in this bike as it would mean that you have to replace the battery as soon as it gets a little weak which adds to the maintenance cost of this bike.

The LED tail light though not as beautiful and bright as in the CBZ, adds to the style of the bike.

As far as performance of the bike is concerned, since the engine and electricals have not been changed, it is the same as the earlier model. But I must say that the engine is very smooth, the shock absorbers are great, the stability of the bike is superb and even if you are in third gear and the speed is 15-16 km/hr (which is in the range of 2nd gear), the bike does not refuse to carry you.

Another thing which I liked very much about Hunk’s engine is it has very good acceleration in all the gears specially in 2nd and 3rd one and the torque is also very constant. The self start of the bike is also good. The engine stars rotating at the slightest push of the button though there is problem in cold starting and I have to use choke when starting in morning (any its only November at present! ).

In a nutshell I must say that Hero Honda Hunk is a good bike with great looks, with most of the features you would desire in a 150-cc bike and decent enough performance. And I would like to tell everyone that when I was surveying the bikes I got stuck between CBZ and HUNK but when I saw the new model of HUNK i almost immediately fell for it decided in Hero Honda HUNK’s favour.

Thus though the new hunk is a bit costlier than CBZ (1000-1500 bucks), which was not so earlier, I must say the new HUNK is worth it and specially when CBZ does not have tubeless tyres and digital console, it makes it a much better option. Also I would suggest everyone to buy the double disk brake version of Hero Honda HUNK if available as it adds to the style and safety and it again is worth to invest another 2500 bucks for it as you would not definitely not regret for it.