The Fact: Hero Honda’s long-running 100cc machines still sell well enough! Why not? Take the CD-Dawn as a standing example, the CD-Dawn is overall a nice motorcycle and comes with solid gold brand equity and robust resale value. Let’s see what it has got not keeping in mind about all the Hi-Performance machines in the market. 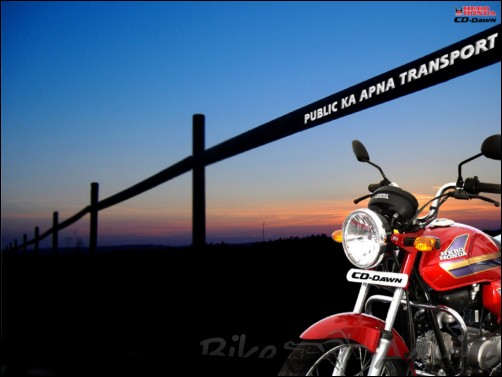 Engine: The horizontally inclined two-valve unit of the CD-Dawn was first seen on the Hero Honda CD 100 when it hit the Indian shores in 1985.Breathing through a Keihin carburetor, this engine has gained a reputation for reliability and

efficiency. The 7.4bhp performance is decent enough for a daily commuter and also good is the handling in simple words.

Ride Quality: The CD-Dawn is a more firm sort of a hard commuter than splendor plus, built to handle harsher terrain. It is a refined unit, and a likeable, uncomplaining nature. The Hero Honda mill will put up with anything you throw at it with a game face. Trundle at 46kph? Fine. Thrash at 85? Well, okay. The bike is lightweight and weighs only 107kg. The budget tyres and adjustable shockers are somewhat acceptable. The most notable feature on this bike is its extra wide seats for those extra riding comforts. The daily commuter’s are sure to enjoy those long drives and also carry extra load easily. 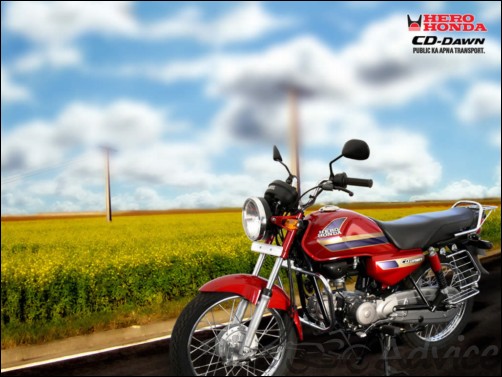 Styling: The bike fails to climb the heights of style and instead succeeds in seeking a harmonious balance between efficiency and functionality and Hero Honda Believes that’s what a Commuter wants. The bike sports a stylish muffler protector which is safer and trendier. Apart from that its decent graphics gives the bike those ‘Contemporary Looks’. The bike is features an old fashioned spoke wheels and a circular headlamp. Speedometer console is kept as simple as possible which sports nothing but pure functionality. What’s surprising is that a Padlock provision is given for Theft security. Now when was the last time you heard something like that?

Mileage: It’s the primary reason why people buy this bike. CD-Dawn gives you 76kmpl in city traffic and 78kmpl in highway conditions which makes sure that the bike lives up to its tagline ‘Public Apna Naya Transport’.

Colors: Interestingly, the bike comes in Six colors which are-

Verdict: The motorcycle has a proven record and comes with remarkable resale value associated with most Hero Honda products. The bike has a astonishing two year or 30,000 km Manufacturer warranty that includes 6 free services.  Priced at just Rs.33000 (ex showroom Delhi) there aren’t many bikes cheaper than this. Go for it if you want a frugal, simple motorcycle that does little more than conserve fuel.