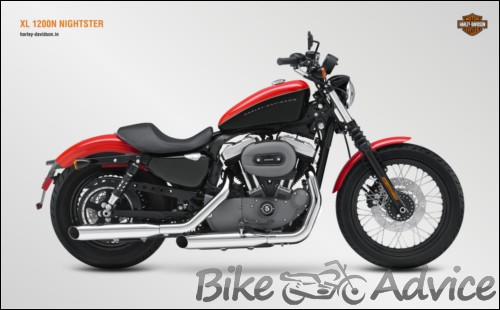 Features of the XL 1200N Nightster Well the first look at the XL 1200N Nightster is just enough to set you hearts racing faster. The mean look of the bike is simply tempting and one can hardly wait to mount on this hottie and zoom away with all glory and pride. The cool looks are supported by superb performance, different design and the low seat height will surely make heads turn around in an awe to say the least.

The mid-mount controls, again the rubber-mounted Evolution V2 engine enables a terrific torque enough to pull your head back with the slight twist of the throttle. The bodywork and engine get a black and greyish finish and is very much in line with the Night Rod Special. The XL 1200N Nightster is adorned with black front forks with gaiters, low front and rear suspension and low-rise handlebar that aids in having a comfortable ride. The bike is perfect for urbanites with many versatile features that will make up for a memorable and comfortable riding experience.

Pricing of the Harley Davidson XL 1200N Nightster: Any Harley Davison bike is sure a precious thing to own and precious things demands premium price, which holds good for the XL 1200N Nightster too. The bike is priced at Rs. 9, 95,000 which is rather a sad thing but people who can make this bike their own will hardly have anything to complain about except the envy on others face.