Harley Davidson is known for producing tough and good looking bikes. Over the years Harley found their fate in rock music as well.  The bike manufacturer concluded its event called Rock Riders in a tremendous fashion with a grand finale wherein the company and rock bands from the country celebrated the joy of Rock music.  The event was concluded at Pragati Maidan in New Delhi on the 4th of December.  Harley Davidson started this event as a five city tour wherein they celebrated the joy of biking and rock music. The cities included are New Delhi, Chandigarh, Hyderabad, Mumbai and Bangalore. 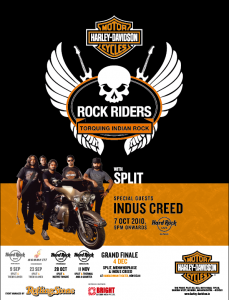 The celebration involved performances from the top Indian rock bands like Split, Them Clones, Indigo Children, Thermal and a Quarter, Native Tongue and Indigo Creed. In fact Indigo Creed was reunited on this event.  Indus Creed was the first ever Indian rock band to put India on the International rock music platform. The band has also performed with Bon jovi and also hosted certain International rock music celebrations. It was through this event they were again reunited.

The festival received overwhelming support of people and also helped the brand value of Davidson brand take a leap.  Speaking on the occasion, Mr. Sanjay Tripathy said that the company’s aim was to bring out the best in rock music with the fusion of both biking and rock music.  He further thanked all the thanks to people for the overwhelming support for making Harley Rock Riders so much successful.  As of now, the event has been successfully concluded and Harley plans to introduce similar events in the coming future.

The event started on 9th September and ended on 4th December. A famous rock band Split started the proceedings and the tour lasted for three months.  It rocked five cities and the first was New Delhi (Sept 9), Chandigarh (Sept 23), Mumbai (Oct 7),  Hyderabad (28 Oct) and Bangalore ( Nov 11). The event conclude with a grand finale in New Delhi on 4 th December. WE hope to see more such events in the coming future.