In 1978, the US government launched 24 GPS satellites into our earth’s orbit for military purposes. Initially they were used by fighter jets and other war machines. The function of these satellites is to emit certain kind of signals over the surface of the earth. This is just about the space/satellite part… now lets get down to earth. 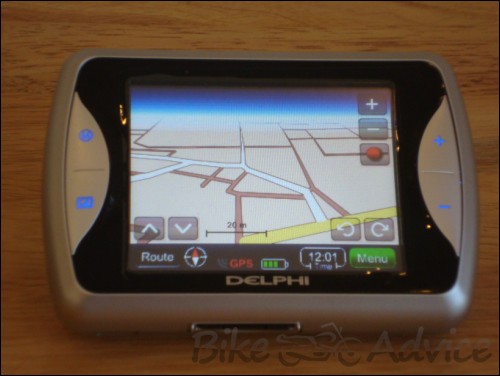 The image that you see here is the MapMyIndia GPS Navigator. This instrument costs Rs.15,000 and can be purchased online through MapMyIndia.com. Recently they have also launched a smaller model for around Rs.12,000. This device has a display, a touch screen, some software built in and most importantly, it has a GPS receiver. It also has a charger, a battery and an adapter for connecting in the car or bike’s 12 volt output.

When you take this device outdoors it starts receiving the signal from the GPS Satellites in the orbit. To pinpoint your (this device’s) location on the earth, the receiver should get access to at least 3 satellites’ signals. Most of the time there are around 5-6 satellites directly above you. Once it receives the signal, you location can be tracked down. There are many formats by which a location is pinned down. The most common format is the Latitude/Longitude in degrees, minutes and seconds. This format can also be converted into decimal degrees which is just a set of numbers with a decimal in-between. We will be using decimal degrees in this gadget… (more about it later).

So how does the device actually work? The key here is in the Map! There is a detailed digital map of India in an 1 GB memory card which is inserted (loaded) in this device even before you buy it. With this map and with the co-ordinates of your current position on the earth, the device will determine where you are in the map exactly.

This map is also preloaded with a lot of information such as cities, roads, intersections and points of interest (like hotels, petrol bunks, schools, theatres, clubs and so on). For each destination, there will be a co-ordinate assigned. So let us assume that your current location is point A and your destination is point B. If you are flying on a helicopter, the device will directly connect you from point A to point B with a straight line (assuming that there are not mountains in between). 😉

But since you are in a bike or car, the device will “process” the shortest or fastest distance (depending on your preference) from point A to point B using the existing road map stored in the memory. So once you set your destination and start driving, the device will guide you along the way. It will say something like: In 5 kms turn right, in 2 kms enter the road tree and take the 3rd exit (usually round-abouts), in 1.5 kms you will reach your destination etc. Apart from the voice you will also get guidance from the display. So if you are listening to music, turn down the volume in this device and use your eyes.

When you buy this gadget from MapMyIndia, a major chunk of it goes to the manufacturer of the device: Delphi. The rest of the money is for MapMyIndia which provides you with a comprehensive map and the points of interest. They say that this map was made by nearly 200 professionals who have been working for more than 10 years travelling all over India. I believe that this map is definitely better than Google Maps especially if you want to use it in smaller cities. There are also some downsides which we will discuss later in this article.

The biggest concern among GPS Device buyers is: what if the preferred destination is unavailable in the map? If the place is new, you cannot find it with the address/door number nor with the name of the place. The same problem is also faced if you live in smaller cities or towns where the points of interest are not stored in the map. The common man will think that the device is useless in such situations. But not you! You can still make use of this device if you are tech savvy! Let me show you how…

Let us consider my case: Last week I had to go to Chennai and I decided to travel in my car since I couldn’t get a train ticket in the last minute. In similar situations a year back, my No.1 hesitation to take the car was ‘How am I going to go around inside a city unfamiliar to me?’ So I would usually travel by bus/train and use taxis in the city. But now I have GPS! Just one day before my journey I booked a room in Chennai and was getting ready for the trip. But there was a problem which I realized just 5 hours before the start of my journey!…

The hotel was very new and I couldn’t find it on the GPS Navigator’s Points Of Interest. I thought I could enter the name of the road, but it wasn’t accurate either. Then I had an idea… I realized that the device also allowed me to enter the co-ordinates as decimal degrees directly. The only thing I needed now was 2 sets of 6-7 digit numbers – The Lat/Lon co-ordinates of that hotel in decimal degree format.

I called the hotel and asked the receptionist whether she know the Lat/Lon co-ordinates for the hotel. She responded as if an alien from mars had called her and I came to the conclusion that it would be too much to expect from the world right now at this time. Perhaps in the near future, everyone would be having the co-ordinates in their business cards instead of having the address 😉

I headed straight to one of my favorite map websites – WikiMapia.org. This website is loaded with Google Maps basically, but anyone can mark places and name them. They can also be edited – maintaining the Wikipedia system! 🙂 I searched for the hotel, but I realized that since the hotel was very new, no one had marked it on the map yet. Then I called the hotel again and noted down all the nearby landmarks and roads. I searched for them on WikiMapia and finally tracked down the position of the hotel in the satellite imaged map. I clicked ‘Add A Place’ and entered the name of the hotel which is Malles Manotaa. Now anyone who searches for this hotel inside WikiMapia can find it on the map and get its coordinates. 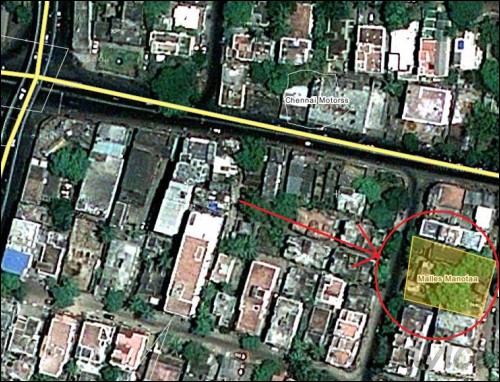 When you click on the location in the map (see the above image), a window pops up where you can find the Lat/Lon of the location on the top right corner of the window (see below). The co-ordinates will be in degrees, minutes and seconds which is the native format for Latitude/Longitude description. 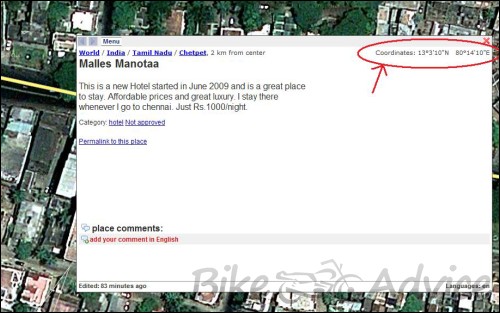 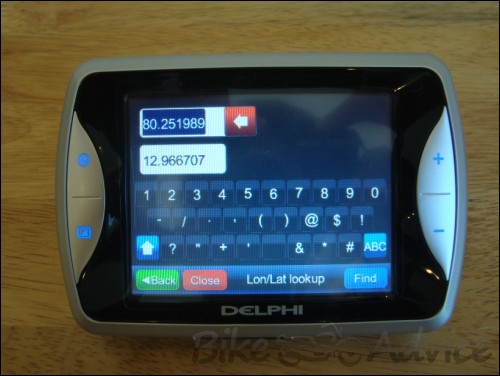 After you enter the co-ordinates in the device, it will calculate the route using the existing road structure and guide you to your destination. I went from my place to that hotel in Chennai right away. I did not look at any board signs nor had I any need to ask strangers for the route. I guess this device would be of better use when I go to Bangalore or Hyderabad where I do not know the native language of the roadsiders.

Pros And Cons Of MapMyIndia Navigator:

Even though the device may look sexy, there are a lot of downsides to it. The first noticeable flaw is that the device manufactured by Delphi is of very low quality. Except for the navigation feature, nothing else can be practically used. Movies, Games, Music etc. are just for the features section in the box and brochure.

Secondly, the map that is loaded in the device is not accurate. Since India is a developing country and a lot of new roads are coming up, the map gets outdated very soon. Although MapMyIndia offers product registration and promises updates for customers, I am unsure how good would it be in the near future. When you travel between cities, you need to see the boards for sure, sometimes you need to take new built roads and divert from old ones as shown by the device. But the ‘distance remaining’ feature would be of great use. City roads do not change so fast, and hence commuting inside an unfamiliar city can be of great help. Sometimes it would advice you to go on a road which is a one way… don’t listen to it! 🙂

The device is pretty costly and you should only buy it if you are a frequent traveler to new places or just plain crazy about gadgets (like me!). I haven’t used smart phones and have no idea whether the GPS in the latest phones can substitute this device (if you do please let me know). But my opinion is that it is better to use a separate device like this since you can fix it to the car and it will serve you as a dedicated route guidance system.

There seems to be no obvious option for loading Google Maps which is definitely a downside. I am not sure which map is superior but in my experience I feel that Google Maps is metro-city friendly but not so good for small towns and villages. MapMyIndia Map’s predictions for time taken to reach destination are pretty accurate. They perhaps know the Indian road & traffic conditions. I am not sure about Google Maps.

I wanted to share my experience about my GPS Navigator purchase & its usage from the head to tail and I feel I have done a great job. If you have experience in using GPS in phone or any other device please share your experience with me and other readers. Leave them in the comments below.