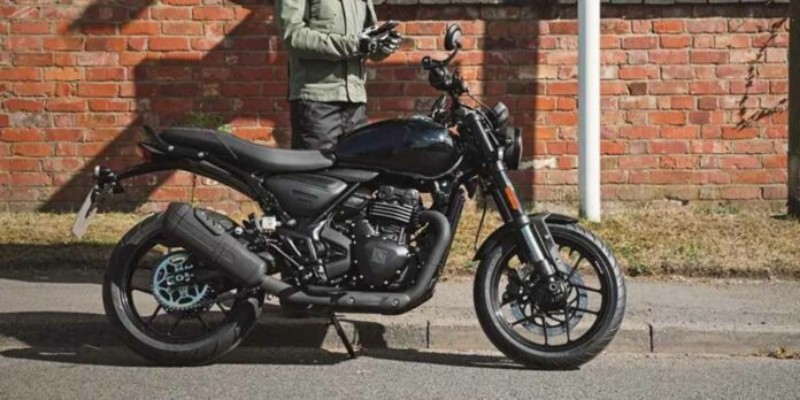 First Bajaj-Triumph bike launch can be expected in the coming few months. The bike appears to be almost production ready and are these intentional leaks…?

So, there are a lot of expectations with the first bike that will roll out from the joint venture between Bajaj Auto of India and Triumph Motorcycle of UK. There were a lot of details shared by Rajiv Bajaj around the time when the partnership was announced including a sub-2 Lac price tag. We aren’t sure if things have changed in these years, but what is certain is that the idea of pricing the motorcycle aggressively will remain.

So, here we have the first motorcycle that has leaked onto the internet – and in fact this appears to be an intentional dissemination of these pics, just to keep buyers of the Royal Enfield Hunter (and few other recent launches) on the tenterhooks. And that looks like a bike close to production.

The first Bajaj-Triumph is, as expected, a roadster, running on upside-down front forks with a monoshock at the rear. It has got that retro charm but still looks fairly modern – more modern than Royal Enfields. There is a round headlamp at the front with, what could possibly be a analog-digital instrument console. There are minimum body panels but a prominent and upswept exhaust – that is likely to produce a rumbling sound – so much needed for bikes of this genre.

The engine size is difficult to identify but we believe it will be between the 200-300cc range – most likely a 250cc – to make it a globally acceptable model. And it is highly unlikely that this ‘mini-Bonneville’ will take any platform sharing from KTM’s engines around this displacement range.

There is a likelihood that this Bajaj-Triumph motorcycle may debut at the upcoming EICMA with an eventual launch thereafter. This will give Triumph a lot of new markets to tap into and a completely new buyer profile. And there will definitely be some direct or indirect Bajaj models based on these…