Many a times, road experiences heave our attention to write something. Few days back, my attention was dragged towards rough driving when I was coming back to my home on my Fazer (Click to read my ownership review).  I was going through a street and one teenager suddenly took “U” turn to move towards my lane. He was driving ACTIVA. After disturbing traffic in both the lanes, he unnecessarily started swinging his ACTIVA from one side to other. He was also applying throttle in addition to frequent hard braking. It was really troubling me to judge his path as I was just behind him. At that instant, I was confused to define his driving, either fast or rough. 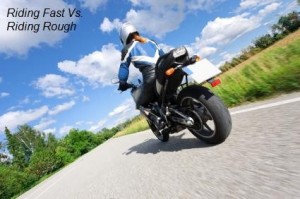 Most of us are fast driver but possibility is there to get converted into a rough driver, either consciously or unconsciously. Many a times, parents also use to say us fast and rough biker. So here, I want to differentiate these two driving habits.

Obviously it relates speed in our driving habits. It doesn’t mean to disturb other drivers on the road. I think, fast driving is nothing but finding an easy and straight way to move our vehicle ahead with more speed than the others are having. In India, at least in Ahmedabad, lane driving is not at all followed by any one. Each driver is just driving his or her vehicle in his or her comfort zone. Few drivers drive at very left and few drive at very right. Majority of drivers form a bunch that drive at the middle of the road. Now if we find a way to move ahead in extreme left or right lanes, then we are observed as rough drivers. We have to generate a zigzag path if we want to accelerate in middle of the road. Here again, we are treated as a rough driver.

It’s all about our habits of driving vehicle that makes us fast or rough. Fast driving never disturbs any other driver on the road either driven straight or zigzag. In zigzag movement, appropriate distance from other vehicles also differentiates fast driving. It also never hurts our vehicle if controlled.

With Respect To Other Drivers On Road

I think all other drivers also feel the same difficulty which I had in above said incidence. Rough driving always disturbs other drivers to make any judgment about movement of rough driver. This happens because rough drivers themselves don’t know when and where he will move in next instant. Sometimes, these types of misjudgements lead to disaster for rough drivers or other drivers.

This situation becomes more critical when group of rough drivers drive on the road and convert their untamed enjoyment into crime. The groups which do this never knew that they are conducting a crime. In Ahmedabad, these types of crimes boost in 9 days festival called “Navaratri”. We are habitual here to read it in news paper headlines during this festival. These groups also scream loudly, behave badly with women/ girls and feel like they are flying in the sky. Cops here use to block many roads to control these activities during this festival. They are really troubling factors for common people. Nowadays, it becomes fashion in youngsters here to show anyone’s untamed enjoyment during riding. We can really define it as rough driving.

With Respect To Vehicle

Next categorization should be followed with respect to vehicle. Many articles already have recommended how to drive neatly within the vehicle’s limit. But in the case of rough driving, it always goes beyond the vehicle’s limits. Hard throttling, sudden braking, half clutching, frequent clutching, quick gear changing, inapt gear ratios, swinging vehicle from here and there, and overloading the seating capacity are some basic practices happen during rough driving.

We all know the effects of above mentioned driving conditions which obviously hazardous for the vehicle. The effects come out as defects either in short period or after a long.

Furthermore to above mention driving, many drivers use to apply horn continuously and gratuitously. I think this one is also a bad habit and should be considered as rough driving. Horn should be used to make other drivers aware about our presence on the road if we are following them or we are on either side. This helps to make judgment and to avoid any accident. Rather than generating awareness, continuous horning irritates and makes the situation erratic leading to misjudgements. Continuous application of horn also carries extra current from alternator which affects the battery charging rate. Moreover, it is also harmful to the diaphragm of horn and obviously generates noise pollution.

I hope, you all have got my thought which is at the back of this post. Please make sure to change your driving habits if you are following any of them. “Change” always takes some time to happen, but it is not impossible. So, justify yourself as a fast driver and not as a rough driver in front of your parents and pals. Please leave your comments as advice.