No single person or company has been credited with the invention of the dirt bike. Off-road motorcycling is really an evolution of many years, with better tires, better suspension and seats, stronger frames, and better control features being credited to many individuals who were essentially modifying their own bikes for better off-road use. Triumph motorcycles did however design a motorcycle specifically built for dirt riding in 1914, although this model is not actually credited with being the first dirt bike. 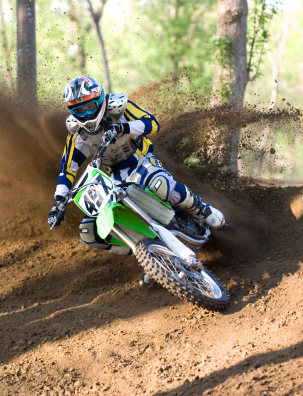 Motocross racing seems to have had it origins in Europe, very possibly France with these early motorcycles being raced through wooded trails or racing to the top of a mountainous road for publicity. Many of these early races were not races of speed but races against time where riders simply competed against each other on an individual basis. Racing expanded as did the production of motorcycles to include scrambles and cross country events which excited and entertained spectators. Incidentally, the word motocross was derived from the words motorcycle and cross-country. The races would eventually be moved to a shorter, closed track for easier viewing by the spectators and better monitoring of the racers themselves. With the world at war and the Great Depression, off-road motorcycles may not have been a priority concept with people for many years but the interest in dirt racing wasn’t about to go away. Then Soichiro Honda came along in 1946 with his idea to produce cheap transportation for people after the second world war.

Honda became the most predominant name in motorcycles and dirt bikes in particular, undoubtedly due to the fact that they are the largest motorcycle manufacturer in the world. They were joined by other manufacturers over the years who would eventually become household names as well. Suzuki produced their first motorcycle in 1954, Yamaha in 1955, and Kawasaki in 1960. Although dirt bikes were still far in the future for the big four, this was the beginning of the onslaught of a motorsport unlike any other. Dirt bikes and dirt bike racing would eventually become one of the most popular motorsports in the world.

After a mix of both two stroke and four stroke motors in various models through the years, Honda finally designs and builds a competitive two stroke motocross motor in 1972. It reached the USA in 1973 and is called the Elsinore CR250. It immediately becomes the fastest production off-road race bike in its class and placed Honda alone at the top of the heap in regard to motocross racing. In the 1970’s, motocross racing would finally do what motorcycle manufacturers hoped it would. Off-road motorcycling would become a recreational activity not unlike bicycling with its popularity exploding among the general public. The big four Japanese manufacturers would eventually produce a full product line of dirt bikes in a variety of sizes for various racing classes and ages. Children’s dirt bikes would become available for those early starters and dual-use motorcycles would also become available with dirt tires and suspension along with street-legal features. Other manufacturers also joined the specialized dirt bike market including Maico, Gas Gas, and KTM.

To this day, dirt bikes continue their evolution with almost constant improvement in weight reduction, suspension, engine reliability, and overall performance. They are used as weekend recreational vehicles by millions of people around the world. The world of motocross racing has become more popular than ever before thanks to dirt bike riding basically evolving into an art form. Freestyle riding and stunt riding are captivating more young riders every year and the manufacturers continue to respond by producing high quality, cutting edge dirt bikes.