Munich Edgar Heinrich will be taking over as the BMW Group’s BMW Motorrad Design Studio by the 1st of July 2012. He succeeds David Robb for the same post. Post his completion of his university degree in design, Edgar Heinrich begun his career as a motorcycle designer with BMW way back in the year 1986 (that was a quarter century old story). Within the BMW Group’s BMW Motorrad Design Studio, Edgar Heinrich was the Head of Vehicle Design Motorcycles under the by and large direction of David Robb from the year 2007 to 2009. Edgar is 53 years old now. 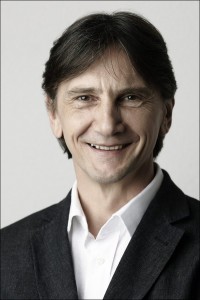 He stepped into India as part of his career in July 2009. He was the Vice President of Product Design with Bajaj Auto Ltd – the country’s second largest two – wheeler maker. He currently heads up the styling and model studio and is also responsible for brand definition and brand strategies for the vehicles’ design.

During his tenure with the BMW Motorrad, Edgar Heinrich was responsible for  4 – valve boxer models such as R 1100 RS and RT, the K 1200 S and R, the HP Megamoto and even the victorious Paris – Dakar racing machines. The successful R 1150 GS and R 1200 GS were also created as part of his design concepts.

It was under his direction that the motorcycle design team created the S 1000 RR, the F 800 / 650 series, the G 450 X and also the BMW Custom Concept study. He was also involved at the start of the design development of the 6 – cylinder touring bikes and the new maxi –scooters that are a part of BMW portfolio.

Motorcycles take up a large part of his leisure time, too. His passions include modifying sports bikes, restoring and collecting vintage models and in particular riding motorcycles himself – both on and off the road.

As Edgar Heinrich himself says, “I am very pleased to be returning to BMW Motorrad and having the great opportunity to be involved in shaping the two – wheel future of the BMW Group with an outstanding team.”

“Edgar Heinrich is an excellent motorcycle designer and passionate motorcyclist who has already made key contributions to BMW Motorrad design in the course of his many years of experience. I very much look forward to collaborating with him to take BMW Motorrad design to ongoing success in the future,” said Adrian van Hooydonk, Senior Vice President BMW Group Design.

David Robb (56) is the previous head of the BMW Group Motorcycle Design Studio, has left the company. He was in charge of BMW Motorrad design for 18 years. It is under his leadership that the design team elaborated the development of the BMW Motorrad product portfolio from three to a current total of six model lines, as well as creating the extensive product range of BMW Motorrad rider equipment and motorcycle accessories.

The first motorcycle designed under David Robb’s direction was the BMW K 1200 RS. This was followed by such models as the first BMW cruiser R 1200 C, the innovative K series with transversely mounted 4-cylinder engine, the F series with 2-cylinder parallel twin and the most successful BMW motorcycle of all time, the travel enduro R 1200 GS. The design concept of the latter is regarded to this day as the benchmark in the category of big enduro bikes. Recently there were additional highlights such as the BMW motorcycles with in-line 6-cylinder engine, the K 1600 GT/GTL, and the BMW superbike S 1000 RR. The first BMW maxi-scooters C 600 Sport and C 650 GT only recently saw their world premiere in autumn 2011.

Adrian van Hooydonk, Senior Vice President BMW Group Design: “I would like to thank David Robb for his many years of successful work and wish him all the very best for the future.