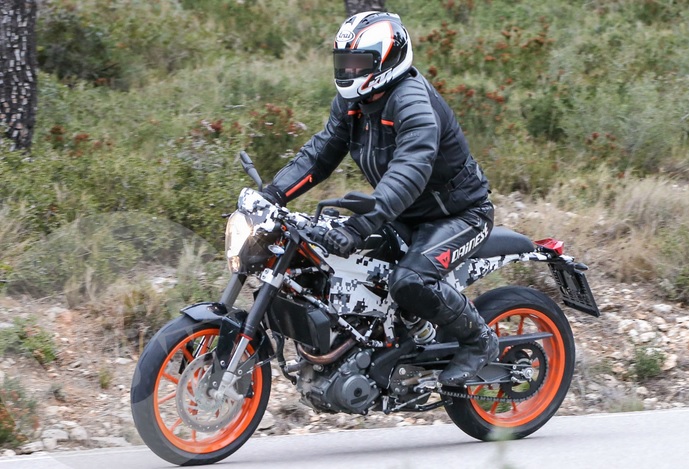 We have been keeping you updated on the Husqvarna brand, the recent acquisition of KTM’s Stephan Pierer. In an interview few months back, he revealed his keenness on bringing these retro-modern-classics to India, however, Rajiv Bajaj is busy with his own Bajaj brand to face the onslaught of Honda (more details).

A while back, with its re-incarnation, Stephan showcased two concept models 401 Vitpilen and Svartpilen under the Husqvarna brand and there have been constant hints that they will go into production and here are the first roaming proofs of the same.

Pictured here is the Vitpilen mule by Visordown.com and it looks real close to the concept model. There are off coarse resemblances with KTM’s Duke 390, the original donor; and the engine and frame is expected to be the same.

The camouflaged test mule carries the face of the Dukes but we believe it will be changed to the round one from the concept to keep a proper distinction. The report also says that there was a 125cc Vitpilen mule as well, which confirms that this will be a complete range of motorcycles.

Production of Vitpilen (along with Svartpilen) is expected to start next year followed by its launch, Stephan has confirmed that the models upto 373cc will get chassis and engines from India with other parts getting assembled in Mattighofen.

He envisages Husqvarnas to rival Royal Enfield in India and as soon as Bajaj gets over with Honda, we are sure there will be discussions on bringing these classic beauties to our market.