Don’t reckon any of my discerning readers would, after reading this bit of news, run out naked shouting ‘Eureka’, or some similar fetching word, and hold up the neighbourhood bank. I do not mean he won’t do it because he thinks robbery is morally and legally wrong, but he won’t do it because he knows he will be busted. The Ducati Monster 800 is a bewitching piece of kit and has what it takes to spur a gentleman into rash things. It has been spotted for the first time ever by bennetts.co.uk. 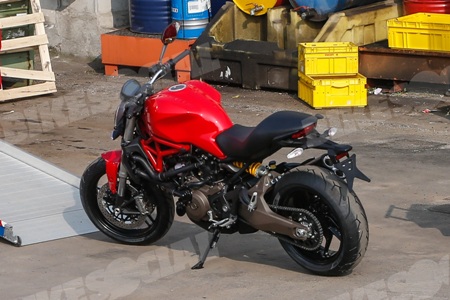 The World Ducati Week 2014 (WDW 2014) is slated for July and the Monster is expected to be unleashed during the week-long revelry. The festival, held every year at the Misano World Circuit, brings together Ducatistees from around the globe celebrating one thing in common – passion for Ducati bikes. Last year saw around 65,000 visitors from 52 different countries.

The Monster 800 is believed to share its engine with the adventure-tourer Hyperstrada displacing 821.1cc, which is good for a prodigious 110 PS. The engine is liquid cooled and comes married to a 6-speed gearbox delivering the power to the chain driven rear wheel. The Monster family of Ducati bikes is known for their sporty performances, aesthetics values, as well as practical daily riding pleasure. 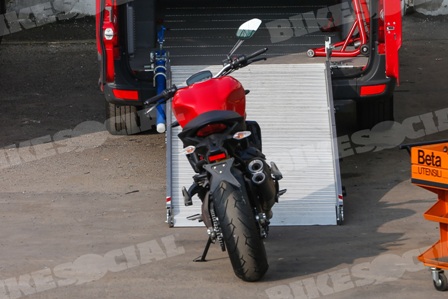 The 800 is expected with the Bosch ABS as standard along with switchable different riding modes plus 8-level adjustable Ducati Traction Control system. The footwear of choice would be the Pirelli Diablo Rosso similar to the ones found on the Monster 1200.

The Monster 800, when launched, will take up position between the smaller Monster 696, Monster 795 & 796 and the bigger Monster 1200. Very recently Ducati has re-entered our Indian markets without any middlemen which was a cause of a long list of frustrated existing customers list.