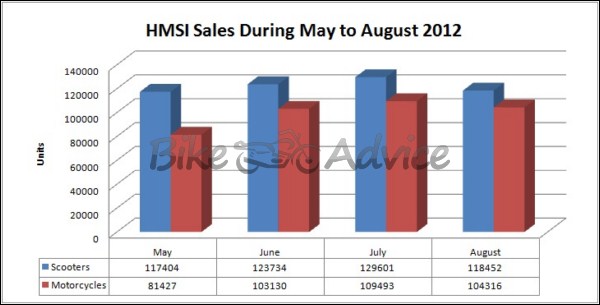 India’s largest scooter selling company HMSI (Honda Motorcycle & Scooters India Ltd) is all set to change its image as a scooter manufacturing company.  It is well known fact that HMSI’s major business comes from scooters.  However, the scenario is now changing after the launch of Dream Yuga. HMSI has started selling more than one lakh motorcycles each month from the month of June.

Honda Motorcyles Sales in India from May to August

Dream Yuga is the cheapest motorcycle offered by HMSI in India. There was no doubt about the success of Dream Yuga as it got the proven engine of CB Twister and Styling of Shine.  It appears that Dream Yuga has also got benefited from Hero Motocorp’s rebranding exercise. Many customers of Hero Motocorp still want Honda’s motorcycles. They have not digested the removal of Honda name and migrated to Dream Yuga from Splendor.