It Happens Only In India – This phrase may remind you of a catchy old hindi song… but it sure reminds one of the current state of affairs here in India. Here I talk about the wrong practices of two wheeler maintenance which surely would be undertaken only in India. As anyone in the know would advice, there are certain do’s and dont’s in the field of automobile maintenance and repair. 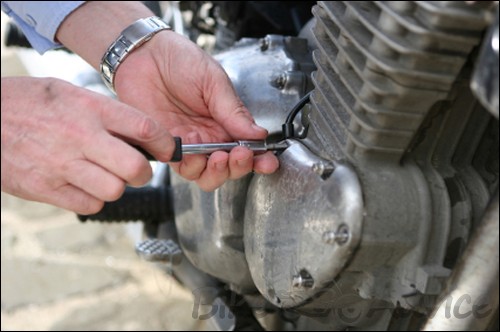 Lets look at the bigger picture… A motorcycle chassis is made up of either tubular seamless pipe or sheet metal, which is one of the several vital parts of a motorcycle. A wheel rim is made up of either sheet metal or alloy and the front forks are made up of alloys and a seamless pipe coated with hard chrome. The point is that each of these parts are made with materials that have specific tolerances for its respective functions.

They certainly have their limits but these are well within what a normal user would subject to it during its lifetime. But accidents can alter these very parts both in terms of strength and durability. A motorcycle would continue to move even if certain parts like the visor, seats, rear grab rail, sari guard all get damaged although with a little discomfort for the rider , but at the same time there are the vital components such as chassis, fork, shocks, frame etc. Which play a serious role in the geometry and physics of the motorcycle.

Most cities in India have some sort of roadside repair shop where you could get almost any part on your motorcycle fixed at least visibly and chances are that the mechanic would not be having an idea on metallurgy and quality of materials. Just ask yourself a simple question.. why do manufacturers spend lakhs of rupees recruiting engineers and specialists? The simple answer is quality. A normal bike chassis during manufacture is subject to a laser alignment test. This is done by manufacturers using a laser to verify that each point in the chassis in the same specification as mentioned by the engineer. The same applies for shock absorbers and other vital components. In Poona there is an area known as NANA PETH, Here you would find people running businesses of Shock Absorber repairing or refilling. A factory fitted shock absorber is fairly reliable, once someone opens it, it just becomes a piece of scrap metal. The Front fork is repairable but repairing a chassis, front fork pipes, fork tee etc. are technically not advisable. As I said all those spares parts have a vital role in the proper functioning of a motorcycle plus a defect in any of these parts would put the lives of both the rider and pillion at stake.

When an accident occurs several parts like the chassis, forks and wheel rims can get damaged. This damage weakens these parts and if you would take it to the manufacturer authorized workshop, they would most probably recommend you to simply replace the damaged parts, which would be expensive but worth it since you would have a peace of mind. At the same time if you were to take the same, damaged vehicle to the nearest roadside workshop, you could get the damaged parts fixed with simple tools like a hammer and a welding tool.. yes, it is much cheaper and faster than the former but think again about the assurance of safety you get here. The only thing that can be called as assurance here is the usual dialogue “Kuch nahi hoga sahab”!

In my humble opinion I honestly think that we Indians would be the only ones in the world who would refill the rear shock absorbers and remove bends of front fork pipes, chassis’ and fork TEE’s. When company seals the shock absorber it can’t be repaired, we must throw it in the event of damage and it should not be refilled. But we do so, just to save some money. Cutting cormers wouldn’t be the wisest decision to make especially when you know that the lives of you and the rider behind you are at stake.

Choose wisely, don’t let your pocket decide how to maintain your machine, let your brain decide.. money comes and money goes, its not the same for health and well being. They say peace of mind is hard to attain and when it may cost a little more, why not spend? Respect your machine, it will respect you…