Sometimes superlatives alone are never enough to truly differentiate something, something that redefines the dictionary for its kind and stands miles apart in any sort of comparison anyone might want to cook up, here we talk about a motorcycle that was designed and built to do just that. Say hello to the Dodge Tomahawk Concept. 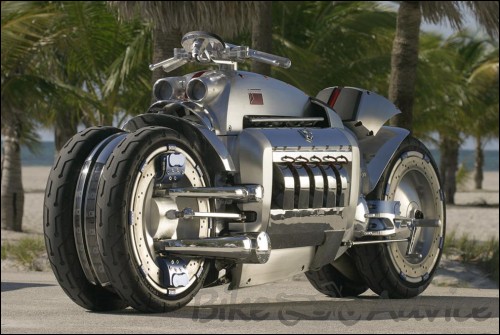 First, a little lesson about its roots, The Dodge Viper. It was a car meant to be like no other in its day, no fancy gizmos, no superior technology, just true American muscle for the 21st century, it simply demonstrated how absolute power can corrupt absolutely. It was pure mechanical mastery, created to offer an unfiltered level of connection between the man and the machine. The concept was simple, a giant engine within a mean looking body, how could they have ever gone wrong.

The first and foremost part of the design process was to conceive the engine, it was initially planned as a V8 which seemed a little insufficient for the folks at Chrysler and hence the layout was changed into a V10. The body design and the rest were later conceptualized and built. Finally, the car made an appearance at the North American International Auto show in 1989 and was put into production in two years. Why have I wrote this much about a car when you obviously want to just know about the motorcycle. The fact of the matter is the 500Bhp V10 that goes into the Viper is the same that is used in this very machine. That’s a 10 cylinder behemoth of an engine for something that’s the size of a shoe. Nevertheless, the people at Dodge pulled it off, creating a one of a kind masterpiece that is just awe inspiring. 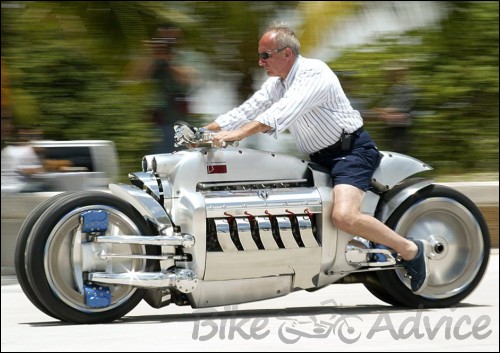 Aerodynamic would not be the best word to describe this it, sharp edges and lack of even a tiny wind deflector shows that this wasn’t designed to be a machine to show off your top speeds on. The leaned forward riding position might remind you of the famous song “I believe I can fly” and its front end looks like it was taken out of a Japanese cartoon… Out of all the lunacy, there are bits of the machine that are rather interesting. Take the engine for example, it’s got more horsepower than a Ferrari F430 or even the Nissan GTR, and mind you, we are talking about a bike here. All the while, this bike makes the speed and power figures of the Hayabusa seem insignificant.

As mentioned above, it is powered by the Viper derived 8300cc V10 that churns out 500bhp and is good enough to shoot the bike from 0 to 100km/h in just 2.5 seconds and on to a top speed of nearly 500km/h, that is if you can really hold on. This hasn’t been tested on the roads, but considering that fact that the bike weighs a little over 600 kilos and produces 500 bhp, it’s hard to deny this. A total of four disc brakes help in bringing it to a halt, each disc being housed in every one of the four wheels, yes four wheels, a machine like this would require these many wheels just to keep it from spinning out every time someone even thinks about twisting the throttle. It even has independent suspension in each of the wheels.

The transmission is a two speed toe shift manual. Another fact that you may find hard to believe is that this bike uses a traditional chain and sprocket system for power transfer from the engine to the rear wheels, the people at Dodge managed to create and use higher strength chains and sprockets to handle all that gut wrenching power. If you look at the picture of this machine, you would find two round openings where the headlights are supposed to be on a normal bike, which anyone would mistake for being actual headlights; these are actually throttle intakes that suck the air into the engine. There is also a liquid cooling system which is housed behind the intake manifold. You would need about 10 litres of coolant and about 8 litres of engine oil to keep this thing running without hiccups, quite a hungry and demanding machine, I say. There is one cool feature however, which comes as an added bonus due to the presence of 4 wheels, this bike does not need a stand. A specially designed hydraulic system ensures that the bike stays upright when it stands without any support; basically, the system adjusts the lateral angle of the two wheels to make sure it stays straight even when being pushed to the side. To light the roads and night, it uses 12 LED’s housed in between the front wheels, the same goes for the tail lights with LED’s fitted in between the rear tyres.

The bike is not certified for legal use in the United States since it does not legally qualify as a bike thanks to its four wheels and also due to its low slung LED lights, so in order for the bike to have been legal in the United States, the engineers must have replaced at least the two front wheels with a single one, which would have made the wheel count down to three and hence put it into the motorcycle category. This would have altered the whole image of the bike and would have also rendered the hydraulic system useless. Or they could have modified the bike to pass all the automobile safety regulations, which was impossible and pointless since it meant that they had to turn the whole thing into a car.

The people at Dodge finally decided to keep it as a Concept but also managed to sell few, 10 in total, through Neiman Marcus, a firm specializing in retail of luxury brands. The price tag for this beast was initially planned to be 200,000$ or lower, if mass produced, but with the absence of street legality and the inability to mass produce due to that reason, had raised the price to an astronomical 555,000$, thats about 2.5 crores. This made it an extremely rare piece of machinery and this fact was further amplified because the ones who owned it had to use only private roads for riding and demonstration as otherwise he could have it impounded.

In terms of fuel economy, if you are really curious, the original Dodge Viper delivered around 5km per litre, since this has the same engine, you can probably guess what it would deliver. On the whole, the thing was a beast; it made all other wannabe hyper machines look miniscule and slow. It defined what concept machines can be like; it showcased the technical and engineering prowess of the Dodge brand and spawned a new era of concept vehicles. Its ludicrous price tag surely deterred a lot of prospective buyers but that simply bought rarity into the mix and rarity made the whole thing more interesting and appealing.