The current Gen-X scene is witness to an ever-growing implementation of Hydraulic Braking Systems in the Two-Wheeler segment. The early braking systems were ‘drum’ based but had a variety of attached problems, unsatisfactory braking control at high speeds and emission issues being two of the prominent , visible ones. These issues are well addressed by the Hydraulic systems. Contenders that ensured high braking performance but put greater loads on high quality maintenance / repairs and precision services including higher levels of sophistication at the workmanship and tool ends. 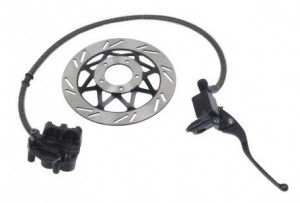 The Brake Bleeder which is introduced by CorePower, Pune is one such high-end tool suitable for Rear / Front Braking Disc Systems (single and double). This Brake Bleeder is a hassle-free and quick solution addressing the brake-bleeding needs and is based on Hydro-Pneumatic suction principles enabling the mechanic to bleed the air from the brake network rapidly and effortlessly.

It is precisely this air (life-saving to humans) that causes poor braking and endangers the life of the bike-rider as well as others on the road.

Conventionally, mechanics would spend a lot of their valuable time in trying to do the same, sometimes using oral suction (using the mouth) to air-bleed the system (which could be hazardous to health especially with modern automobile fluids). A significant damage component to the inner seals via over-pumping was also common. Removal of air trapped within the entire braking network was indeed a painfully slow process….

And this is precisely why new Brake Bleeder is a saving grace to all mechanics! The Brake Bleeder being introduced is high-end tool and a great aid to  mechanics in automobile workshops, garages and service points, notwithstanding it’s utility for the bike-owner(s) indulging in self-repairs / self-maintenance. This new tool is far superior to its cheaper rivals available in the local markets in terms of high-quality build using standard grade materials and itself being easily repairable / serviceable.

The Hydro-Pneumatic Suction system of this new tool supports Cylinder suction and Exhaust Pressures upto 10 Bars which is more than dequate for bleeding purposes. The long stroke (125mm) and large bore (25mm) of this tool ensures rapid bleeding within minutes and constitutes the true strength and ‘value-for-money’ of the tool.