After weeks of relentless teasing with a video that showcased the dingy underbelly of Japan (Yakuza ? Geisha ??), Yamaha has finally cleared the haze over their latest offering, the new MT-09. In another Gets-you-on-the-edge-of-the-seat video, four such bikes keep swerving and thatch-weaving in and around a city, presumably Tokyo. 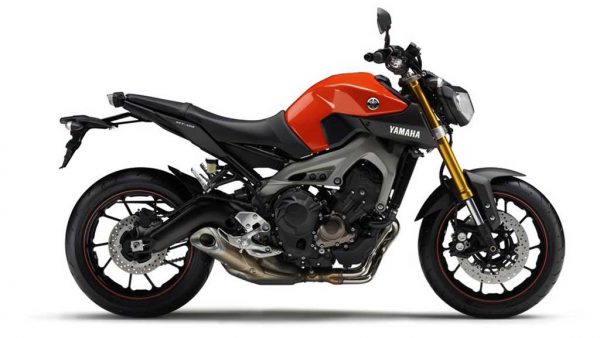 Any emotional/dynastic baggage that this bike carries over with it? Not much really, it is like a whiff of fresh air, except for the burden of expectation that might be pushed on to its shoulders because of its shared letters with another thunderous sounding bike from Yamaha, the MT-01. Well, the animalistic bike from Yamaha has arrived, and it does seem to be capable of what Yamaha had claimed, i.e. breaking new ground in the world of motorcycling.

Here is our first impression of the all-new Yamaha MT-09.

The much-desirable Forward-Hunched look is present, with the eccentric-looking aluminium die-cast frame’s exterior adding to the Unassuming-Character of this bike. It does manage to carry on the muscular design cues, without even slightly bordering on overkill. It seems the designers played chomp-chomp on the headlamp’s edges, and it reminisces us of a FZ. In another glorious stroke, Yamaha’s designers have given the new MT-09 a KTMesque chunky front mudguard.

However, move your eyes along the profile to the rear of the bike, and you can’t help but notice the sparseness in the design theme that just centers most of the visual mass around the engine and the radiator. In fact the exhaust tip is brutally hacked even before it musters up an appreciable length, and is thus a stubby undergrowth at best. The rear seat doesn’t really rise skywards, and it isn’t split too….but hey, didn’t Yamaha say they were out to shatter conceptions with this bike? 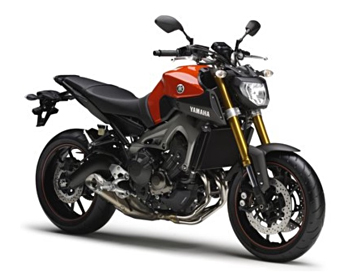 Love it or hate it, but you can’t just ignore the Yamaha MT-09!! It’s even got a graphic logo for itself, which can be compared to that of Brammo, the pioneering American Electric Superbike maker.

Coming to the aural experience, we haven’t really bore the full brunt of the three-pot mill, but we do expect it do some catching-up with the Yamaha MT-01.

Yamaha’s stated aim was to create an engine which would keep the adrenaline flowing thick and fast in the rider’s bloodstream. They seem to have hit the Bull’s Eye!

The thumping-heart of the Yamaha MT-09 is a 847 cc fuel-injected, liquid-cooled three-cylinder mill and it is married to a six-speed gearbox. Churning out an heart-rending peak power of 115 PS @ 10,000 rpm along with a mammoth peak torque of 87.5 Nm @ 8,500 rpm, this mill has enough spunk to spice up the monotonous home-to-office-back-to-home commute. But don’t expect it to be a slouch on the highways….it will surely blast off the highway tarmac on those lazy Sundays!!

Yamaha claims that the mill produces phenomenal levels of linear torque, and that the bike would always be a joy to ride.

No need to crouch over the tank to reach over to the handlebars! Boasting of an upright riding posture along with wide, comfy handlebars, the MT-09 definitely makes sense for burning rubber within city limits. And the comfortable riding position will not hurt one’s back on long rides, either!

Yamaha probably has spent a lot of R&D time mulling over the three-pot mill. Since it’s narrower than an inline-four, it definitely makes the bike’s dimensions more compact, thus enabling it to tuck itself neatly into the gaps between the caged-in cagers (Read Four Wheelers) in characteristic urban traffic. 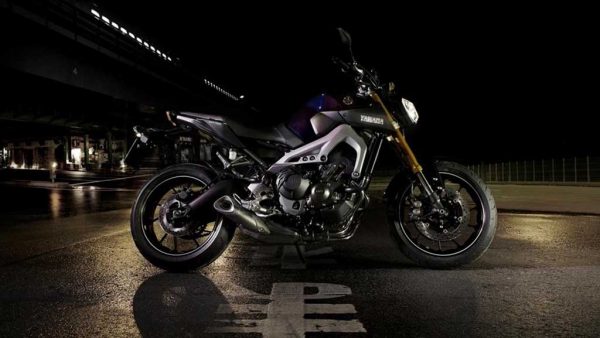 The Japanese manufacturer has also claimed that the lightweight die-cast aluminium frame will be agile and easy to handle, while the comfortable riding posture with a flatter seat will enable more control.

We are blown away by what we see! Yamaha managed to keep the chit-chat going with the help of its canny teaser and the end result is definitely awesome. The Yamaha MT-09 does look the bit, and the mill looks savory on paper. Compact dimensions due to the naked bodywork as well as a narrower three-cylinder mill coupled with amazing specifications add oodles of “Commu-Touring” practicality, and Yamaha does have a bike on its hand!!

The only assurance we need stems from experiences with a 200 cc naked bike. If it can lead to much hue-and-cry over the absence of a windscreen on a yet-to-be-launched 390 cc bike, imagine what sorts of curses a 850 cc bike would drag along in its wake!! Mr. Kunihiko Miwa, are you listening??

The MT-09 will be available in tinges of Deep Armor, Blazing Orange, Matt Grey and Race Blu. Deep Armor is probably what the bikes in the video are splattered with, but “Blazing Orange”??? Meanwhile, have a look at this Indonesian R15 to get a hang of Race Blu. 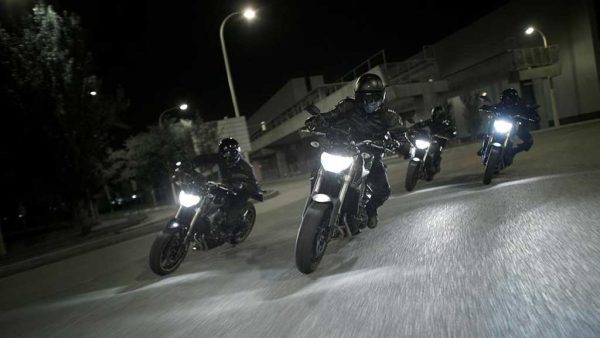 The European MT-09 will cost 7790 Euros which equate to approximately 6.10 Lakh in INR!

But the question is: Is it Coming to India, Anytime?

A final frenzy for spec-chart enthusiasts. Here we go :-