Ducati, the Italian sport bike maker has always been known for its range of sport-bikes, which either looks fresh or unique at all frames of time and Ducati Monster has been no exception for this. It’s been one of the best sellers from the stable of Ducati. The design of this street bike is a class apart and stands out when it is made to park with the other street bikes from various other brands. The frame on which the Monster is build is yet another uniqueness for the bike which adds feather to the crown of Ducati. 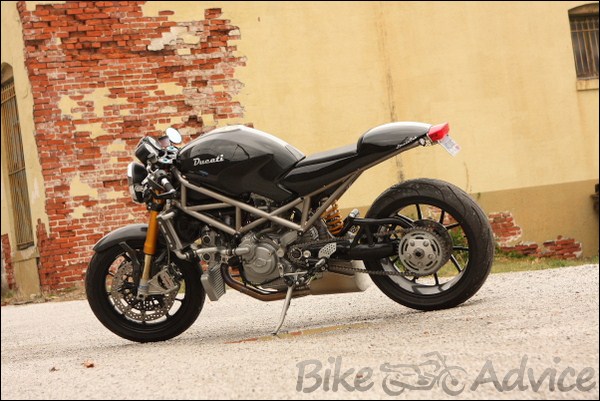 Now, an American biker named Randy Martin has built the first ever Ducati Monster with a Titanium frame. Titanium is a light weight material with high tensile strength as many of you would already be knowing. Randy claims that his bike now weighs just half when compared with the stock model. Martin said proudly, “The bike is truly a Monster now. I call it ‘Mostro Della Strada’; Monster of the Road.”

Wanna know why Martin even thought of taking this idea of installing a titanium frame.Here is the reason for the same. Martin runs his own fabrication shop in Kansas and he was interested in showing others what his company is really capable of. Though he was reluctant initially on letting out the cost of the Titanium frame, he said he sells similar frames for a price of £4000 which is about US$6500. In terms of INR, the figure goes up to a whooping 3.25 lakhs of Rupees just for the frame alone. Titanium deserves it anyways!

In order to make this change, Marin had to buy a Monster and was forced to dismantle it completely. This enabled him to better understand his bike before going for this customization which is one of the kinds. He said, “I purchased this Monster S4RS that had only been ridden 600 miles in three years. The bike was brought home and completely disassembled.”

Martin then had fabricate a welding jig for this new  titanium frame, which makes use of a  larger diameter tubing when compared with  the stock one and then proceeded to custom machine the frame plugs for the larger tube. But it seems that the Titanium frame is marginally bigger than the stock frame. He says,  “The stock frame weighs 28lb (11.5kg) and the titanium frame weighs 15lb (6.25kg), that’s almost a 50% weight saving. Titanium has a little more spring to it than chrome moly too, so the diameter increase maintains the stiffness of the original frame. I wanted to give the bike a beefier look as well and this achieved that.” 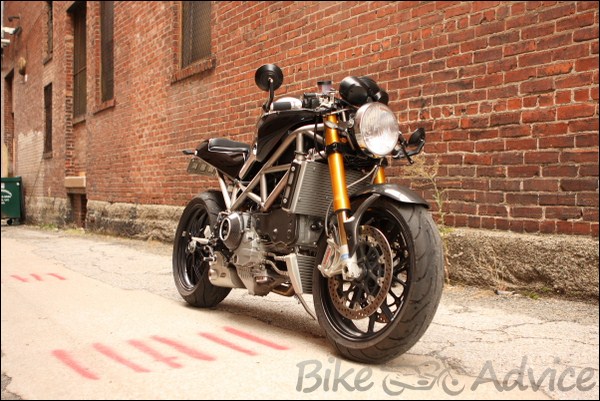 He has also taken the customization on his Ducati Monster to the next level. He wanted the bike to resemble a Cafe Racer to a greater extent and for this visual upgrade he made a few changes in the seats too. Here is what he says about this, “In order to make the bike look somewhat like a café racer and save more weight I decided to make the seat pan from carbon fibre. The seat pan and gas tank were painted Jet Black Metallic with Silver stripe and most people don’t notice, but the Ducati font on the gas tank is different than stock. I also added Driven clip-ons and Rizoma grips and mirrors along with CRG levers. The clutch cover is another carbon fibre piece made by StradaFab with a machined aluminium trim ring and the exhaust is a Quat-D Ex-Box and sounds great. The brakes and suspension remain stock though as the Brembos and Ohlins are some of the best offered.”

The final change he made was that he changed the front sprocket from a 15-tooth to a 14. According to Martin, the reason for this mod is that it makes the engine a little more comfortable when riding around the town, presumably because this would prevent the clutch slip as well.

I’m personally impressed with this frame customization. It’s very unique and is fruitful too as it reduces the frame to half of the stock weight. Great!