As the title says this comparo is between the Yamaha YZF R15 and the recently launched Hero Honda Karizma ZMR. We have seen many reviews and comparisons between ZMR and R15. In order to make this one special I have included my real time experience with both the bikes in a Product Marketing point of view. As we all know the YZF R15, 150cc Mini Sports Bike launched two years ago by Yamaha. While Karizma ZMR roars with a 225cc and is a recently launched variant of Karizma R which is the Flagship offering from Hero-Honda. Both these bikes are built for sheer performance but targeted on entirely different audience. 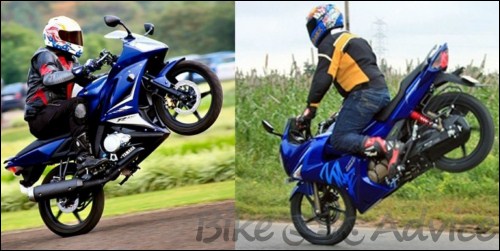 At first, a customer has to understand the concept and Audience who are targeted for a product, else you will end-up in a big disappointment. R15 is designed for a 20-25 year old who weighs between 60-70 kgs. If you probably fall into this segment the R15 is just for you. Remember you got to bend yourself and adjust with the lowered foot pegs in the R15, which is not possible for all ages. Whereas the ZMR is targeted on bikers over 25 years with Huge Built. Visually a ZMR will not fit a slim biker. So Decide which segment you fall in before choosing one.

It’s obvious R15 is a clear winner in this segment hands down. Though looks purely depend on one’s personal preference, but the majority always rules. It’s ideal to say R15 is the 150cc version of R1 , there is no need explain much about the stunning design. Moreover the R15’s front cowl is designed Aero dynamically to provide Precise airflow control. The Sculpted tank which blend into the Front Cowl and Yamaha’s trade Mark Dual Lamps will make you fall in Love at first sight. But the rear disappoints a bit with skinny tyres and makes no big difference to a normal bike. Many say R15 is looks tiny, but its sleek design does the job perfectly. Also we have to admit the fact that R15 and FZ have paved way for a new generation of Bikes in India. It’s obvious that many bikes can been seen modified only with R15’s fairing. 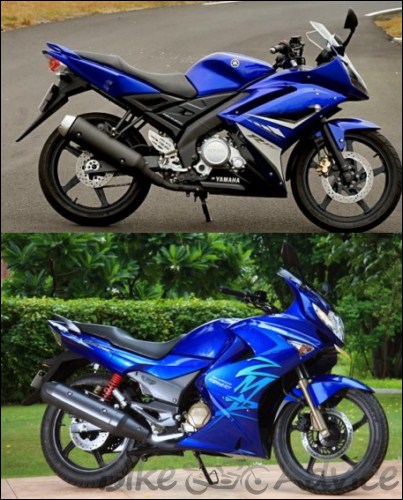 Now coming to the ZMR, which slightly resembles Busa in styling and Proportions. The entire design shows an urgency and inspiration from other models. The Huge ZMR Stickers in the Front looks freaky which highlights the entire design. The Tank remains the same from ZMA R as its one of the best for Knee Rest. The Rear LED and Grab rails slightly resembles its sibling CBZ Xtreme. Like the R15 there is nothing interesting about the rear. Being more precise ZMR’s rear mudguard look exactly like a 125cc TVS Flame. ZMR shines in Five Colours. In my opinion White outshines the reset. While the other colours will just say you have a ZMR. 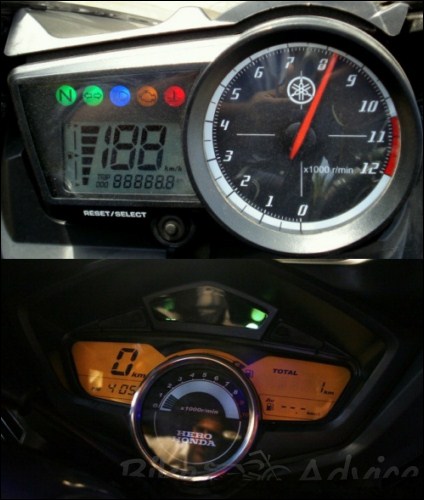 The digital speedo in ZMR is really a striking feature which is interactive with its owner, wishing Hi and Bye. While R15 borrows the speedo from its sibling R125.

On Road: With a Suitable rider on both the Bikes a R15 will surely outperform the ZMR right from 0- 145 kph (On Speedo). Where its almost impossible to exceed 125Kph on ZMR’s Speedo. many reviews and articles say R15 lacks Low end Pickup. I certainly disagree with that. May it be the Pulsar, Apache or R15 It all depends on what RPM you keep the engine. In this case the R15’s rpm needle is the fastest to reach 10,500 rpm amongst all Indian bikes >250cc. Hence you have to keep the R15 is its power band to challenge others. To remind, R15 has a Engine Cut-off at 10,500rpm , which can be removed by remapped ECU which costs only about 5k/-. With Proper gear shifts, it takes about 11 secs to reach 0-100kph in the R15, where ZMR managess it at around 13 secs. We might think ZMR lags 2 Secs behind, But this absolutely makes no difference within city road conditions.

ZMR’s Power band is even throughout the entire RPM range, similar to Suzuki GS150. Also you get the adrenaline rush when you accelerate the engine initially, which is totally absent in the R15. On the other hand once you cross the 7000rpm mark in the R15 you must get ready for the real ride, First time when I crossed the same, I felt like someone is pushing from the back. The ultra refined engine will show no sign of vibrations even when cruising at 120kph, also the seating posture helps Wind Flow efficiently through your shoulders, This doubles your confidence. Where as in a ZMR the seating posture is straight and simple like its performance, cruising is smooth at around 100kph which is ideal for touring. From a Performance point of view the ZMR may disappoint you a bit.

Since both the bikes cost you over a lakh. It’s obvious that expectations would be quite a bit more than usual. Performance is not the only aspect to judge the winner. The next comparison is on how these bikes feel on road. The moment you sit on the R15. All the tiny bike feeling would be washed out. You need to bend and adjust yourself to reach the Handle and this gives a sporty feeling and you are ready to be mischievous. The ZMR is plain and simple. All you got to do is just sit and hold the Handle, no adjustments required. R15 is more or less a Track tool, Since the bike weighs a little over 120kgs, All cuts and curves can be handled with Ease. With the 159 kgs in ZMR you get more responsible and makes it almost impossible to handle deep curves without hitting the brakes. ZMR comes with the same legendary front brake from ZMA R and a Rear Disc too. R15’s disc brakes take biking to the next level. Eventually ZMR heavily lacks a Mono Suspension.

In short the R15 gives you accurate handling in city traffic. ZMR is rather contradictory, its huge mass makes it rock solid on highways and manage any amount of wind flow with ease. Certainly the ZMR has a hand over the R15 in touring comfort as you cannot bend yourself for hours and keep the throttle over 9000rpm. ZMR reveals its maximum capable torque at a early 6000rpm itself, So no need to stress yourself as well as the Engine. In Short the ZMR is the holy grail for Tourers and nothing handles like the R15 on a short city ride.

Both bikes ripped at their best will give an optimum mileage bet 30-35 kmph. Improper Clutch/Gear handling will reduce further more. Since the R15 has a tiny 150cc engine it has a hand over the ZMR in this segment. If the throttle is held below 5K rpm for commuting then it returns an average of 45kmph while ZMR returns 40kmpl in the same scenario. Apart from that many still have issues with the R15 not having a centre stand and only one Head light works at low Beam. 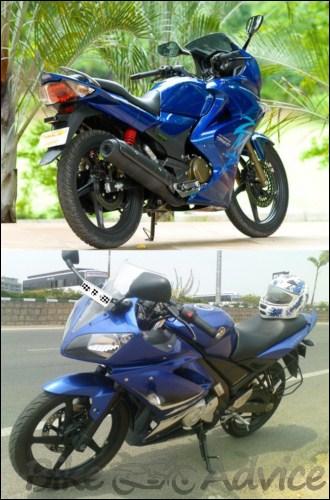 Regarding Quality, Both Hero-Honda and Yamaha have a good history and experienced over their business. Hence they won’t bother you much on a Maintenance point of view. For the first two years oil and Brake pads would be the only replacements made. Both justify their price tag with a Various array of options. No matter you select R15 or ZMR oil and Brake Pads will cost you the same 415/- and 1100/- respectively. In my opinion , both the bikes will surely perform healthy for over 5 yrs. Which would be a dream for every Pulsar and Apache owner. Still many are unaware that the Front Fairing Plastics of the R15 costs just about 3000rs, same as ZMR. So do we really need to worry about a crash guard? Unlike other bikes Yamaha has not terminated its job after selling the R15. There are additional performance accessories that can improve its performance, which can be outperformed only by the Ninja. But in my opinion that ZMR’s throttle is also controlled by an ECU. Why not Hero Honda launch performance accessories similar to R15?

ZMR over R15, Lets see the Features in which the ZMR rules over the R15. First the Speedo which is really a good initiative in making an interaction. ZMR boasts 18 inch wheels which gives a huge bike like feeling. ZMR has a relaxed 225cc engine which stays relaxed even at high RPMs.Also the bike comes with a closed chain cover which really helps to keep unwanted dust and particles settling on the chain. The R15’s open chain may look aggressive but it costs about 150/- extra for every time you use a chain spray. The LED lamps is an eye catching element in ZMR which really grabs every one’s attention. In my opinion there is no comparison to ZMA R’s dual tail light.

R15 over ZMR, Its a Fact that R15 is the most technologically advanced Indian bike. Which has a array of features over the ZMR. Firstly R15 is about 25 kgs less than the ZMR which makes an amazing power to weight ratio . Handling or rather Flicking the R15, in City Traffic is a Pleasure. R15 has six gears and better aero dynamics which makes it more efficient. The mono suspension is a gift to Track racers. Dual Head lamps gain more attention over others and last but not the least R15 has a well balanced Liquid cooling system.

This is the Major aspect in which most Indian based Bike Manufacturers hit their Jackpots. This reminds me a famous quote “Cheat me in Price not in Quality”. Absolutely there is no compromise in Quality offered by R15 and ZMR. That doesn’t mean that Yamaha and Hero-Honda cheat in Price. They have good justification for and the overall package is well balanced.

R15 engine runs in a controlled environment with a ECU monitoring the throttle and an advanced Liquid cooling system that certainly maintains optimum engine oil temperature. Now if you still my Apache/Pulsar has over 17ps power, Disc Brakes etc etc and why should I waste over a Lakh on a R15 or a ZMR. The Answer is Reliability. I have seen R15 engines which are still the same even after 2 yrs, Same means almost similar to a stock engine. But unfortunately a Pulsar/Apache will surely lose its health after vibrating for two years.

Moreover in my opinion “Value for Money” is not measured by the Product to Price Ratio, its rather Product to Satisfaction Ratio. On a real time scenario almost every R15 owner till date will be happy about their selection while others mostly end up in Second hand market with the least resale value. Since ZMR is new to the arena we have to wait a watch for its customer satisfaction. But yes its a fact that many ZMR lovers are unhappy as they have cancelled their booking due to high wait time. Additions like Dual Front Fairing, Advanced Cooling system and Mono Shocks help the R15 have a step over ZMR in this Segment.

To be even precise, R15 is for Boys and ZMR is for Men. 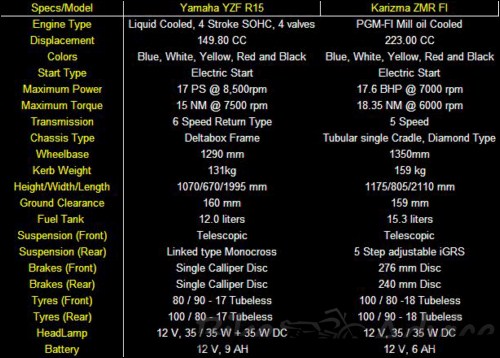