Imagine a world where there are no petrol bunks and no pollution. With more and more car companies introducing hybrid cars in the market, bike manufacturers are also planning to bring out hybrid motorcycles. The Suzuki Crosscage is one such attempt by Suzuki. 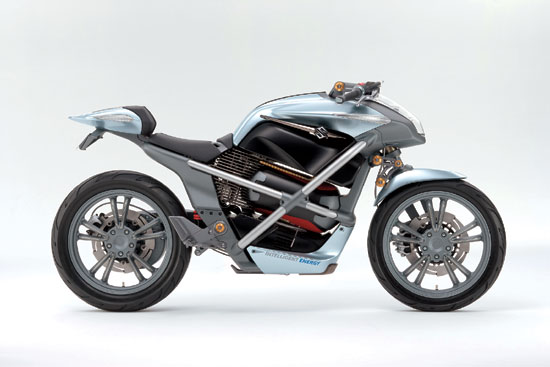 The Crosscage is powered by a hydrogen fuel cell battery designed by a British company named Intelligent Energy. The concept behind the power generation is quite simple. We all know that water is made of two molecules of hydrogen and one molecule of oxygen. The hydrogen which is the cylinder (the fuel source) combines with the oxygen in the atmosphere which gives rise to water vapour which is the only exhaust.

When water is formed by this process, it produces energy which is converted in to electrical energy which in turn is stored a lithium-ion battery (the same kind of battery that we use in our mobile phones). The battery powers the motor which makes the bike move.

This technology makes the bike very light and friendly to the environment. On a single tank of hydrogen, the bike can travel up to 200kms with a power equivalent to that of a 125cc motorcycle. Suzuki is just testing how the market responds to hybrid bikes. There is no plans for mass production yet for the next few years.