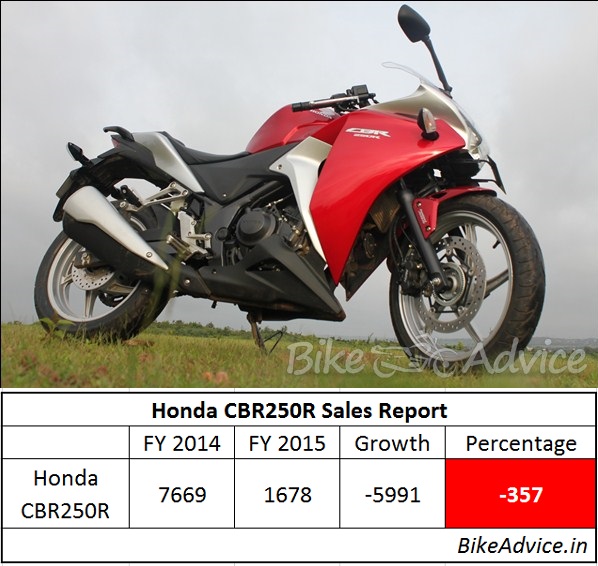 Honda launched the single cylinder CBR250R in India back in 2011. It was liked initially for its price and optional ABS but there were quality glitches which even ardent Honda fans could not digest. However, the motorcycle continued to tread along without any significant mechanical updates and with minor color additions every other year.

But conditions appear to have changed and with the advent of competition, it is abundantly clear that CBR250R has been kicked out of the game, almost! The single cylinder 250cc has registered a sales fall of almost 6000 units which equates to a massive 357 percent reduction when we compare its sales in the financial year 2014 (April 2013 till Mar 2014) with the last financial year (Apr 2014 till March 2015).

In terms of numbers, against 7669 units (average: 640 motorcycles every month) Honda sold of the CBR250R during the complete 365 days of FY 2014, they managed only 1678 units in the last financial year which ended in March 2015, which is an average of just 140 motorcycles every month. The major impact appears to have been caused by KTM with their Duke 390, RC390 as well as its smaller sibling RC200, which is bang in the same price bracket.

For the last month ie April 2015, Honda started the new financial year on a similar note and registered sales of 176 CBR250Rs. Its an indication that a new CBR250R or CBR300R, which are already on sale in some international markets, is long due!

Honda has been immensely aggressive in the volume churning 100 to 150cc motorcycle segments and scooters, however, they have been agonizing slow in anything over it. Whenever we have asked the company about the new quarter liter CBRs, they have downplayed the question without revealing anything specific.

Honda recently announced that they have as many as nine launches planned for this year and it is very obvious that one of them is the new CBR250R facelift or the new CBR300R! But the question is – How Soon?