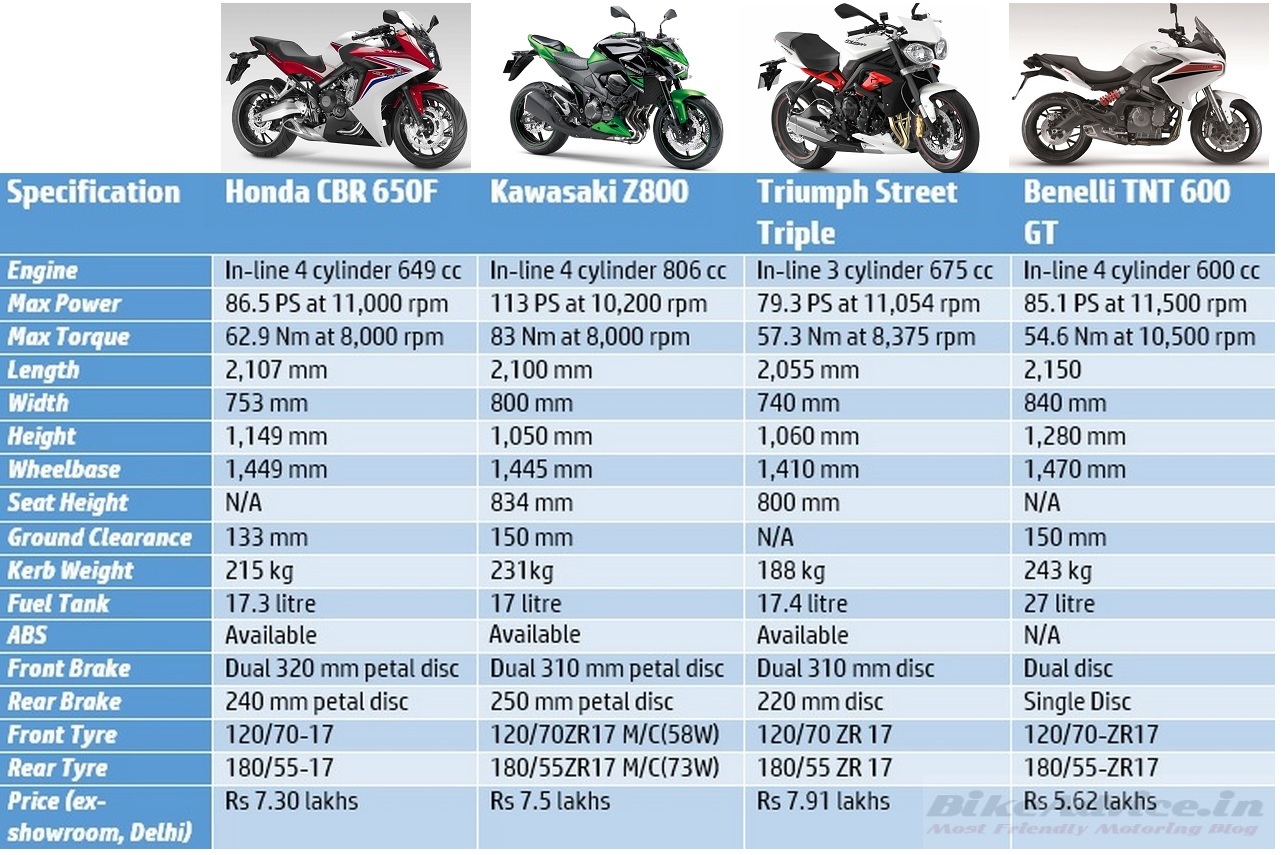 The mid-capacity motorcycle segment has been one of the most exciting ones of late with motorcycles from various manufacturers fighting out for attention. It was a slugfest between Street Triple and Z800, before the fantastically priced TNT 600 twins made way.

The recent launch of the much delayed Honda CBR650F has added a new flavor to the sumptuous spread as it becomes the first full faired sports tourer in the reckoning. But how do these motorcycles fare against each other? We pick specs of each one of them and put them together to compile a quick report which will help you narrow down your choices, if not finally zero in on one!

To put things in perspective, Z800 is the biggest of the lot and the most misfit in this list. However, it is here because of its very competitive pricing. The Japanese Kwacker, owing to its obvious capacity advantage, emerges as the most powerful option here and produces 113 PS of maximum power and 83 Nm of peak torque. None of the other motorcycles are anyway close! 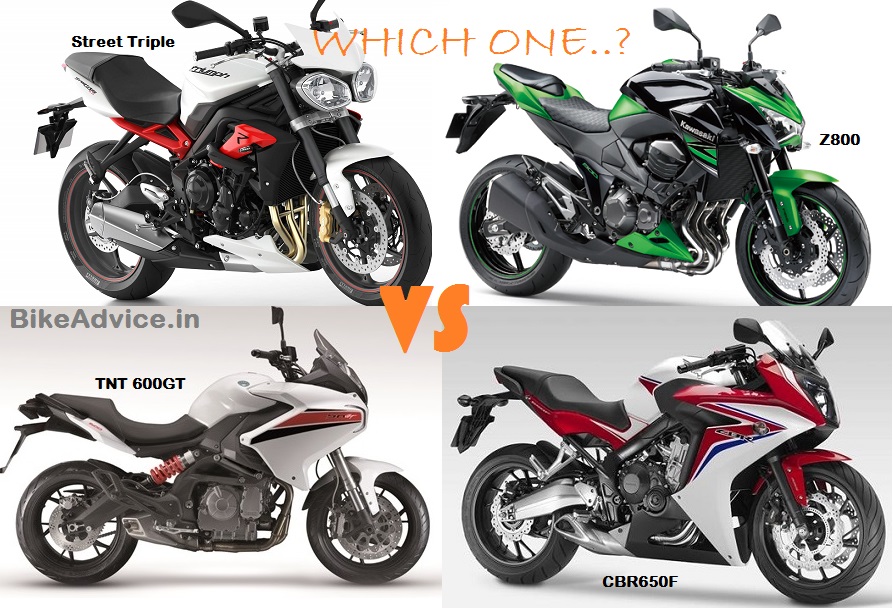 Triumph’s Street Triple is the only motorcycle which gets a 3 cylinder engine (rest are all 4 cylinder motors) and is the least powerful of the lot. CBR 650F and the TNT 600GT churn out about same power outputs but the Honda extracts higher torque and at lesser RPMs.

Street Triple may appear to be meak in terms of specs but when we factor in its low kerb weight of 188 kg, you know where all the sprightliness comes from! Just to highlight, the next motorcycle ie the CBR is a massive 27 kg heavier, which is the same difference between it (CBR) and the Italian GT.

If we talk about range, the segment here averages about 17 liters of fuel tank capacity, however, the Benelli exuding its true touring potential, comes with a massive 27 litre fuel tank which will allow it to return the most impressive range.

TNT 600GT is the only bike in this comparo which comes devoid of an ABS and we would urge Benelli to include it in its next iteration even if it results in an increase in its cost. All the four motorcycles are shod with dual-front and single rear discs.

Here is the Spec and price comparo sheet… 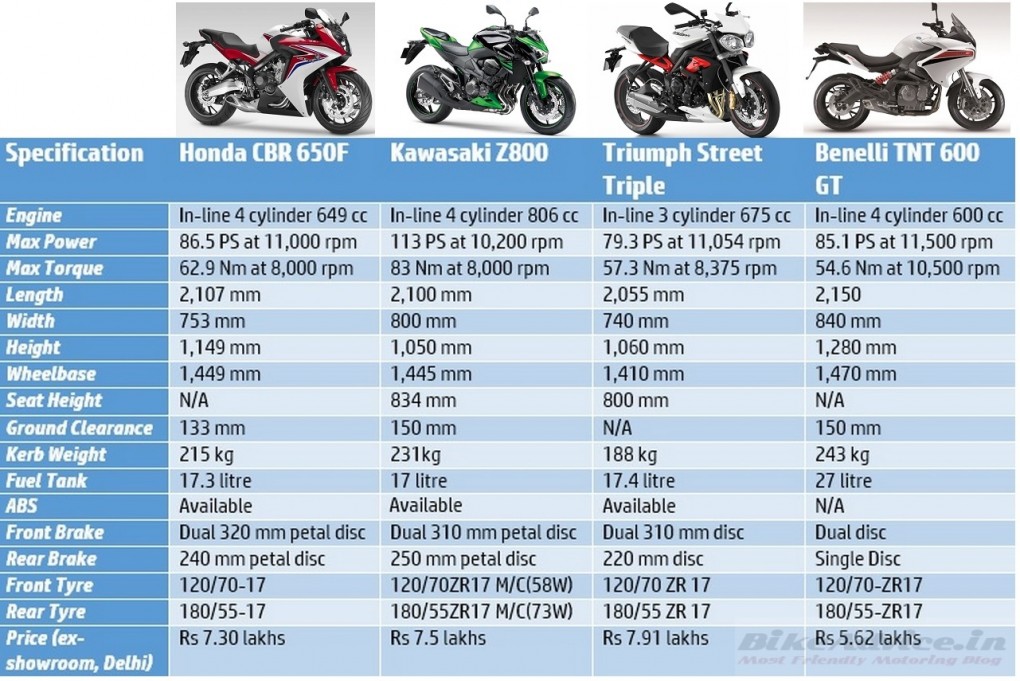 So how many greenies you will have to shell out to buy each one of them. Let us put our hands together to congratulate DSK Benelli for pricing the TNT 600 GT at superb levels, which make it the most affordable motorcycle in this list, and at a price tag of under 6 Lakhs ex-showroom this is sheer VFM!

All the others are spread between Rs 7 to 8 Lakhs. The Triumph Street Triple, at around 8 Lakhs, is the most expensive on the list but you get a lot of features and that 3 cylinder grunt for that money.The locally produced Honda at an asking price of Rs 7.30 lakhs is a little disappointment and Honda could have been a little more aggressive here, however, it is the only one of its kind in this list – a full faired sports tourer!

Check out All Motorcycle Comparos

As we said earlier, the demon Z800 is a segment higher product, made very interesting after its price cut last year. We have ridden the Z800 and the Street Triple and both of them are fabulous machines in their own regards. The TNT GT is impeccably priced and packs quite a punch for what it offers and you just can not write the CBR off just for its price tag, before taking it for a spin! So which one will you pick between these four mid-size monsters…